More cards bad, fewer cards good – it’s one of the standard precepts of deck construction. In fact, having a smaller deck size can be so valuable that this little wooden duck saw play: 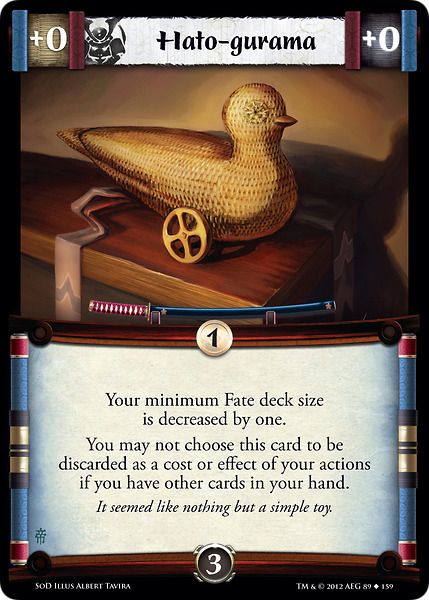 A playset of Hato-gurama made your Fate deck 37 cards, but with 3 (almost) useless cards in it. Today’s card does the opposite, a really strong card that increases your minimum deck size:

If you know me, you know I love 4G Holdings that produce 4G. So you can imagine how intrigued I might be by a 4G Holding that produced 5G. But the big gain of the all 4G Holding scheme (super-consistent gold) is undermined by that pesky deck size increase. With a 46-card deck, you’re adding in another 2.5 Holdings (give or take). So instead of swapping out a playset of your worst Holding for Coastal Lane, you’re swapping out one of your worst Holding for 3x Coastal Lane (which might now be your best Holding), or just adding in the Coastal Lane without taking any other Holdings out. Still, on average that’s generally going to be a better set of gold. But your average Personality will be worse, since you’re just adding your next 3 (or 4) Personalities into the deck. There’s an interesting decision to be made there.

4 thoughts on “Preview – Coastal Lane (A Line in the Sand)”