It’s getting to be that time of year again, with the storyline craziness of GenCon just around the corner, and the first information has been posted about the storyline events at the peak of the summer convention season.

First, the main event (including the usual grinders on Thursday and Friday) – showdown with P’an Ku/godzilla:

Face the Madness: The architect of the insanity that has plagued the Colonies has been revealed. P’an Ku,the broken dragon,the embodiment of madness,has driven the Colonies to the brink of devastation in its futile attempt at imperfect recreation. Thousands have been cursed by the dragon’s madness,and the entire relationship between the Colonies and the Empire teeters on the brink of madness. But all is not lost. The loyal servants of the Divine Empress have discovered a means by which the Mad Dragon may be defeated. A powerful ritual discovered by the magistrates of Doji Hakuseki will force the power of the dragon to manifest into a physical avatar,an incredibly powerful entity that will pose untold danger to the Emerald Empire. However, if this avatar can be defeated,then the threat of P’an Ku can be ended. With no other options available, the forces of the Empire have chosen to accept this terrible risk.

If you aren’t qualified for the main event there is, of course, a Second Chance tournament on Saturday:

A New Voice: As the era of madness at last comes to a close in the Colonies, there are great changes afoot in the Emerald Empire. Togashi Satsu, the former Dragon Clan Champion who has served as the Voice of the Empress since the ascension of the Divine Child of Heaven, Iweko I, has taken ill with a terrible fever. His condition seems unresponsive to all medicine and ritual, and in the interests of ensuring his duties are not unfulfilled, he has chosen to retire from his position. The time has come for the Empress to have a new Voice.

This year, for those not competing in the grinders, there are two(!) L5R events on Thursday. The first, with the traditional L5R Invitational title:

The Kolat Master: For more than a generation, the sinister criminal organization known as the Kolat have been believed dead by the Empire. Their ancient tower is nothing but a dust-covered ruin. Many of their leaders died at the blades of the vengeful Scorpion Clan, their disgraced bones left to lie bleaching in the sun, never to know the sanctity of a proper cremation. Their heresy was exposed, their crimes avenged, and their shame ended forever. All precisely as Master Coin desired.

The second of the two Thursday storyline events (starting only one hour after the Invitational), is a Special Storyline Event (no, I have no idea what that means), which seems to be the showdown between P’an Ku and the Fudoists:

The Monk & The Dragon: As the battle against P’an Ku’s madness comes to a head, so too does the conflict between the cult of the dragon and the cult of Fudo. This is an ancient struggle that has flared up time and time again across the history of Rokugan, but never as fiercely as it has within the Colonies. Without the watchful eye of an Empress to mitigate their excesses, the forces of the two groups come together in one final, desperate battle.

Friday brings the ‘usual’ alternate-format tournament, but this year is the first time there’s a Big Deck tournament. Note that proxies are allowed for this one. Storyline is a bit vague, but it’s your one shot if you want to bring one home for a defunct faction. So … anyone have a playable Ratling decklist? 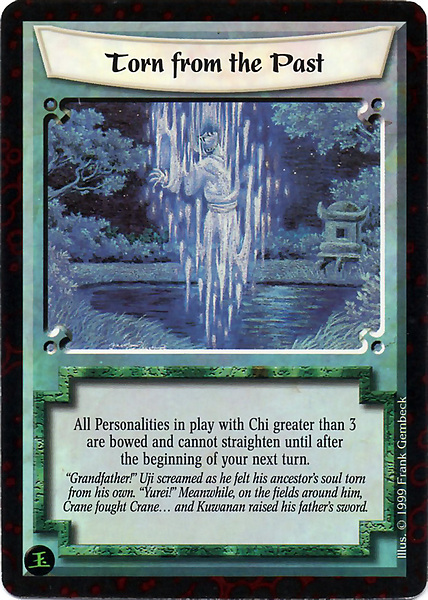 A Tale From The Past: Rokugan is a land of heroes, with innumerable men and women of great virtue and bravery having filled a hundred libraries with a thousand tales of valor.

As with last year, there will be a series of draft qualifiers throughout the weekend, culminating in an 8-person draft on Sunday:

A Hero for the Ages: In every generation there are countless samurai who seek to make a name for themselves, gaining much honor and glory for their family and clan in the process. Most go on to live lives of relative obscurity, with little to distinguish them from their brothers and sisters in arms. A handful, however, gain the attention of their lords and become the stuff of legend, inspiring the generations to follow just as they were inspired in their youth.

One thought on “L5R CCG Storyline Events at GenCon 2013”