Greetings, Legend of the Five Rings fans! At Gencon this year I managed to sit down for a brief interview with Bryan Reese, Lead Designer for Legend of the Five Rings. With the new Siege: Clan War being premiered there he was willing to answer some questions on that product, especially about the previously unrevealed Fu Leng/Yogo Junzo deck. Hopefully you’ll enjoy it. 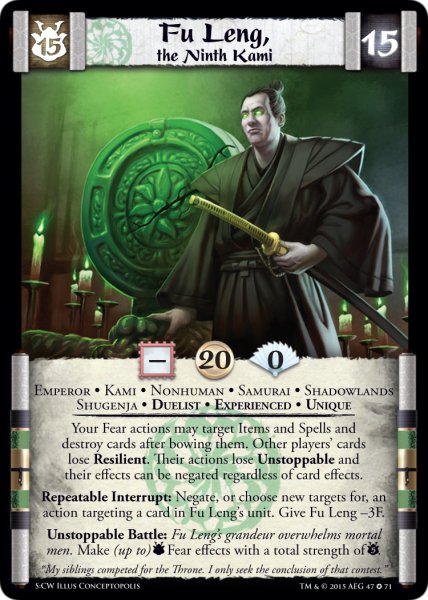 Hello, Bryan. Thanks for speaking with me. So, we’ve already seen articles discussing the new Rokugani decks included in this product, as well as the Black Scrolls and how they are the new Clock deck, but until now we knew nothing about the Fu Leng deck. We’ve also seen the new provinces and learned that Fu Leng is on the defensive – a flip from Siege: Heart of Darkness where it was the Rokugani players on the defensive. Now that the product has been revealed and people have had a chance to see how it plays, what was the biggest reason for this inversion?

Bryan Reese: Well, we wanted to keep it consistent with the time period. During the Clan Wars, Fu Leng was not on the attack: he held the seat of power. It was the armies of Rokugan and the Seven Thunders who needed to attack and defeat him.

We also wanted to have this slow corruption of the clans. In the original Clan Wars Fu Leng was slowly building influence, taking control without being noticed. The corruption mechanics highlight this fairly nicely.

This corruption also mechanically allows the Fu Leng player to keep up with the Rokugani. He’s facing 3, 4, maybe even 5 Rokugani players. By giving Fu Leng this ability to take corrupted Rokugani units he’s better able to keep pace with their body counts.

SA: I remember from the last Siege product, you found there were certain key cards like Encircled Terrain which made the game much harder for the Siege deck. In Siege: Clan War how did you address these potential challenge wrecking cards?

BR: Well, first of all by being on the defensive cards like Encircled Terrain are already not a concern for the deck. That said there are still cards we need to be prepared for to not unbalance the game and there are counters for them in the deck. The Corrupted Geisha House 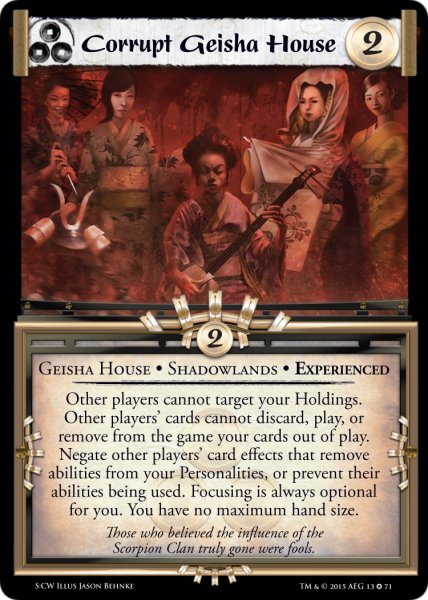 is the most obvious, preventing most meta cards the Siege player would need to worry about such as Victory Through Deference.

Once he arrives, Fu Leng himself serves to handle many of the other effects that might otherwise be damaging to the deck. The repeatable cancel at the cost of force lets the worst offenders be dealt with in a way that still lets the actions do something and not just be dead cards for the Rokugani.

SA: So was the decision to have the final province come with a terrain part of this balancing too?

BR: No, that was actually a story decision. The final battle is taking place in the throne room: it doesn’t wander over to the jungle, or the parapets of the castle – it’s in the throne room. It didn’t make sense for there to be a change of terrain during the battle.

SA: This isn’t a video game final boss, where you beat him and then move on to the next fight. (laughing)

BR: (chuckles) Exactly, the final battle is in the throne room.

SA: So, my penultimate question is one more of story too: other than the new personalities, the personalities in the Rokugani decks are currently legal personalities rather than personalities from the time period. I’ve even seen some jokes off of this along the lines of “Look, Seppun Teshan! Guess he’s in his eighties now!” Why didn’t you use Soul Of personalities, letting you use the mechanically relevant personalities while also having them flavor wise be distinct personalities?

BR: So, unfortunately we just don’t have access to the art to reuse personalities who were used back then. Sure, it would’ve been great to have Ginawa back, but that’d just be putting his name on some other personality. The same with Soul Of – you’d have Soul of Seppun Teshan running around, but it’d be exactly the same with extra wording to explain to new users. In short, it just didn’t seem worth the confusion to us. Besides, I don’t think anyone’s actually confused about 80-year-old samurai running around. (Chuckles)

SA: And my Final Question for you Bryan, what will be the theme of the next Siege product, and why will it be Ratlings?

SA: Fair enough, thanks for your time Bryan, have a good rest of your Con.