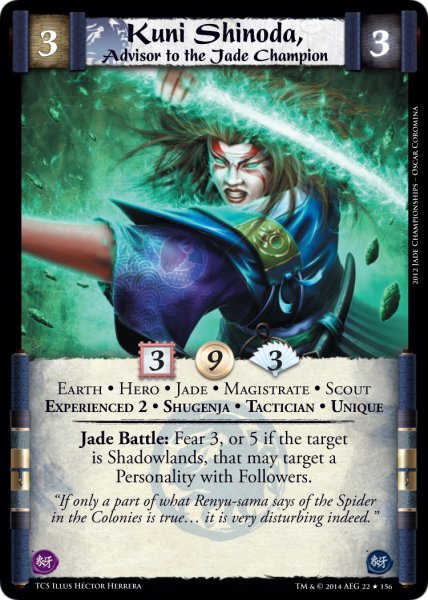 The Coming Storm is the first Ivory Edition expansion for Legend of the Five Rings. As is standard for L5R expansions, it is sold in 16-card booster packs (15 normal cards and one card that has the draft Stronghold on one side and usually a token on the other) and 36-pack boxes/tins. This review is intended to give broad impressions of what is happening with L5R in this set, not as a high-level card-by-card examination of the expansion for tournament play.

What’s Going On In Rokugan?

The overarching story in L5R this year is the political maneuvering (and soon to be military maneuvering) between the two eldest children (Iweko Seiken and Iweko Shibatsu) of the Empress, who has still not designated which of them will inherit the throne. Both heirs are now in the Colonies, where their immense authority is virtually unchecked (because almost anyone else of real import is back in Rokugan proper). This is conveyed in The Coming Storm through lots of flavor text (well, and the set title). 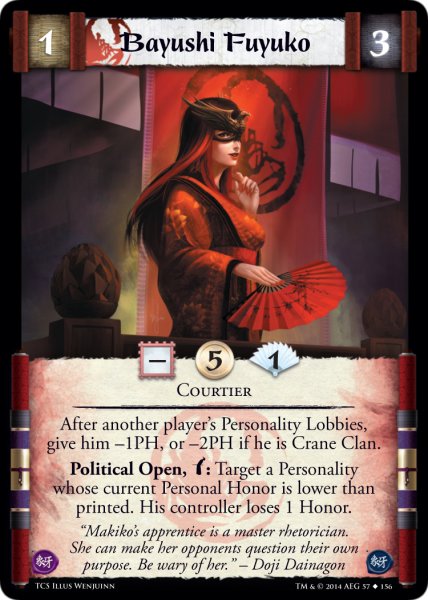 –          Crane v. Scorpion: A lot of cards reflect an (unsuccessful) effort by the Crane to have the formal Court of the Colonies transferred away from the Imperial Second City and to the Crane’s Twin Forks City. At least partially in relation to thwarting this political ploy, several cards embody conflict between the Scorpion and Crane.

–          Crab/Lion v. Spider/Dragon – The Crab and Lion have been skirmishing with the Spider for essentially the last two years, but this conflict appears to be bubbling to the surface again, with many mechanical references not only to the Spider/Crab/Lion animosity, but also to the Crab and Lion teaming up. And, as always, the Dragon are semi-inexplicably throwing themselves in on behalf of the Spider on the basis that only the Dragon are allowed to punish the Spider (even though they never do).

–          Lion v. Scorpion – Not sure what’s up with this one, but there’s flavor text about the Lion and Scorpion fighting, and the Lion seizing Scorpion land, and the Crane are somehow involved as well. But the “Lion v. Scorpion” rules text count equals the “Lion <3 Scorpion” rules text references, so this one might be more narrow. Plus the Crab and Scorpion are supposed to be BFFs these days, so I’m not sure how the Lion are grabbing Scorpion land while being buddies with the Crab. 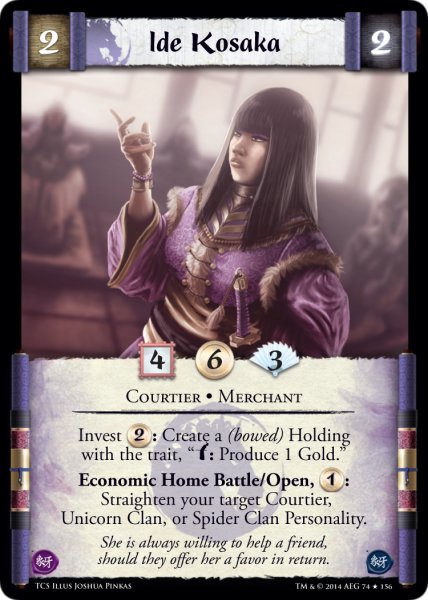 –          Spider/Unicorn – There’s one buddy card for this pairing, although it doesn’t seem to represent anything new in the story.

–          You may notice a lot of flavor text about random characters killing each other. This is due to Kotei results from last year, and doesn’t seem to really have any relation to overall story.

–          The marquee cycle of The Coming Storm is probably the “Way of the … ” Strategies, which theoretically work for anyone but gets a big boost for the named Clan by having Discipline. Each is pretty thematic for the Clan in question:

o   Way of the Crab: Berserker resilience – straightens your Personality, negates any Force penalties, gives him +2F … and blows him up at the end of the turn. 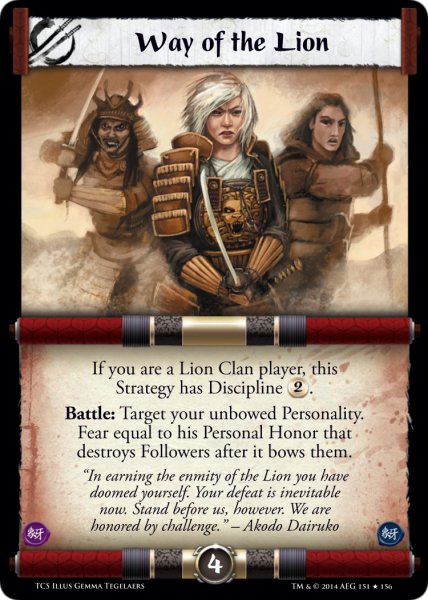 o   Way of the Crane: Battle duel that can dishonor the enemy or gain you honor (I suppose that, in the past, this would have been a Limited duel).

o   Way of the Dragon: Battle duel that gives Force bonuses and penalties.

o   Way of the Lion: Fear effect based on Personal Honor.

o   Way of the Mantis: Straighten your guy, get to used Ranged Attack abilities again.

o   Way of the Phoenix: Straighten a Spell, get to use its abilities again this turn, take an additional action. 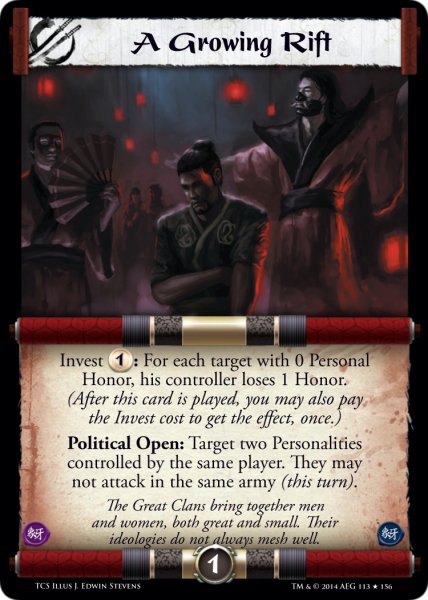 o   Way of the Unicorn: A weaker Ring of Water.

–          Wow, is dishonor going to be here in a big way. Scorpion dishonor was pretty good before The Coming Storm, but now it and Crab/Yasuki dishonor (and possibly Crane) pick up a mess of good cards in Yasuki Aitoko, Yasuki Shairei, Bayushi Fuyuko, A Growing Rift, Way of the Scorpion, and so forth.

–          Possibly benefiting from this is the Unicorn. The Ponies were the strongest faction heading into The Coming Storm, and Cavalry is a natural foil to dishonor control. Unicorn can also make the best use of Cavalry Escort, the semi-bonkers Follower that lets you unopposed buy a Personality out of one of your provinces and then attach the Cavalry Escort to it (for a total of a 2G premium, or 3G if you count the inefficient stats of the Escort itself).

–          Apparently someone wants it to be harder to control the Favor, as a couple of Events and a Strategy yank the Favor and/or cause an honor loss related to the Favor. There’s also a Spell, Look Into the Soul, that was probably designed to help Shugenja honor decks defeat Crane (because as it stands Crane will pretty much roll other honor decks), but it could also just be used as anti-honor fodder for dishonor decks. May not matter much anyway, given how lightly played honor has been. 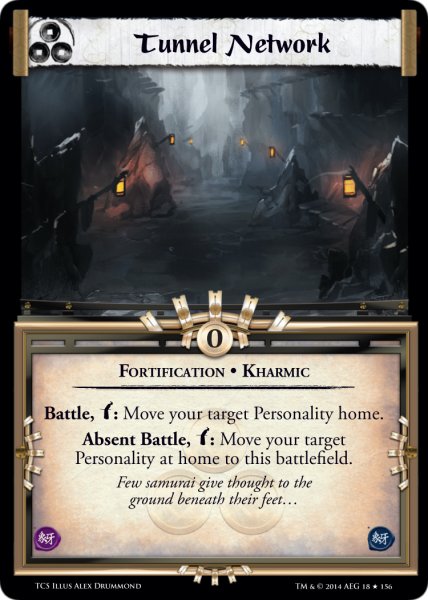 –          There are Fortifications! This Holding keyword returned immediately prior to Ivory Edition, but then showed up on only one card in Ivory Edition itself. There are, however, several in The Coming Storm.

–          There’s another 4G Holding that produces 4G (Bountiful Fields), making it almost possible now to just run all 4G Holdings for a super-stable gold scheme (I’m including the pseudo-4G Jade Pearl Inn in this as well).

–          Flavor text referring to the Lion and Crab as “the two mightiest armies in the empire?” I might take offense to that if I was the Unicorn. 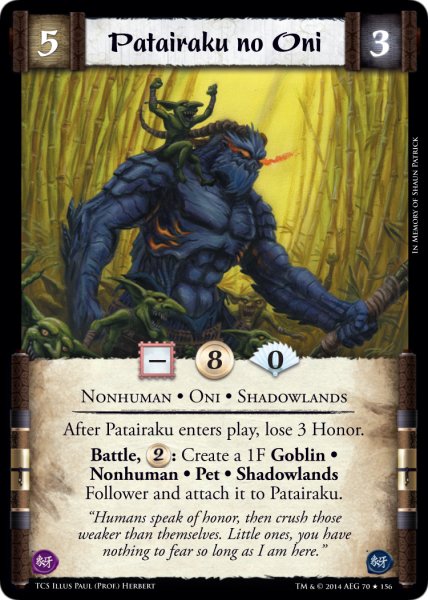 –          Spider honor looks like it might be in a pretty decent spot when the next expansion hits – there just isn’t enough to support it now, but The Coming Storm lays a good foundation for the next expansion, when each Clan gets it second “theme” Sensei, and Spider’s will be for the honor deck.

–          In Memory Of cards are both uplifting and depressing. L5R has lost several players recently, and I suspect that Patairaku no Oni is not going to be the only one we see in the near future. R.I.P. Shaun Patrick.

–          Kensai continues to be “blessed” with far more cards that care about it than most other ‘theme’ keywords, and that’s a lot of cards to fill your binder.