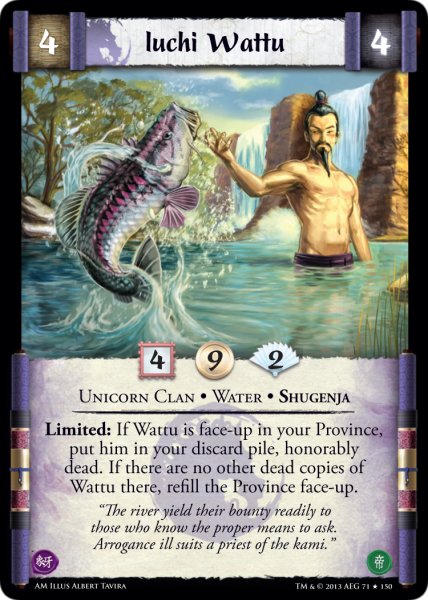 Sorry this post was a bit delayed – with the full results for the Szczyrk Kotei not posted until today, the update would only have been a single Kotei, but now we’re good to go. Note that this post contains only information through the Kotei for June 14, 2014, and does not contain any data from the June 21, 2014 Kotei. Those Kotei will be in the The Coming Storm environment, and so will have their own separate tabulation of statistics (note that the story results for the two environments will be combined, because it doesn’t really matter what environment those are from).

Last weekend brought us a second Dragon win for the Kotei season, and another Scorpion. Not a lot new to be added, although one may want to note that Dragon’s ability to make the cut and not win has, over time, become a general mediocrity at making the cut, and that Spider exits the environment as the only Clan without a win.

This may or may not be the final post with only Ivory Edition. It contains all of the data on all of the Kotei, but it does not contain the small Origins tournament, except to note that Mantis won. I have the player count and the Top 2, but I am not sure if the cut was just T2 or if there were more decks in the cut that I don’t know about.

Now that all of the T2 decklists have been posted for Ivory Edition, I hope to have something of an analysis posted later this week, so keep your eyes open for that.

As usual, here’s the chart for just the post-errata environment:

Two particular notes here. First, the total number of Kotei used has been reduced to 62, since the Moscow Kotei (which should have already happened, but did not) is entirely gone from the schedule. The other is that the apparent error in the official results from the attendance at the Barcelona Kotei remains in the official results and has not been addressed by AEG. I am keeping what appear to be the correct Crab, Crane, Spider and Unicorn attendance figures here, although if AEG hasn’t addressed the apparent error yet, I don’t expect them to at this point.

As for the projections themselves, we don’t have much in the way of change. There will presumably be a shakeup this weekend with a new environment rolling to town, but there are only 13 TCS-legal Kotei, and only Scorpion is borderline (they seem reasonably likely to improve, what with the influx of dishonor cards, but their margin is pretty narrow). Given the portion of the scoring that is attendance, it seems difficult for anyone else to crash or rise enough to his/miss that 500 mark.