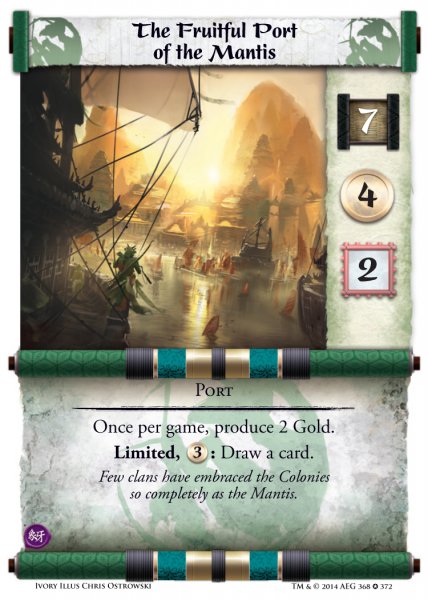 We’re on the home stretch on this overly ambitious series of budget decklists for Ivory launch. I’m almost back to my boys in the Dragon, but first lets stop at the Mantis, if only so I can irritate some Mantis players by drooling over some of their Personalities.

So, what distinctive things can Mantis do? Well, for starters, the Stronghold has a gold cost of 3 on the ability, so it will be handy to have Holdings that produce 3G. There’s also a good chance that we’ll be starting the game with an extra 2G, and our ideal use of that 2G is to buy more Holdings (or better Holdings on T1), including the possibility of getting 6G Holdings. Sadly, bushi league finds itself a bit lacking in this department:

Temple to the Elements
Merchant Atoll (rare in starter deck)

Well … we should play with Merchant Atoll at least. With lesser bushi league options, that +1 Province Strength is even more enticing.

We do, however, have another possible synergy with 3G Holdings here – that 6G of T1 production can be 2x 3G Holdings. And even if we’re going first, there’s the possibility of T1 Yashinko + 3G Holding. 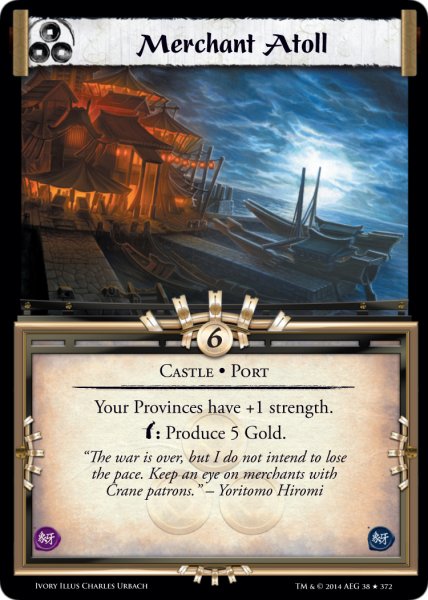 And we’re spent! Who needs any of that Fudoist Advisor/Family Library/House of Exotic Goods nonsense? (P.S. We may need to adjust this depending on what our attachments are)

On the Personality front, we know we’re going to have Naval, but I’m not sure how much we’ll be able to do with Naval without bringing in attachments, so we’ll have to make sure to keep that in mind as we’re finalizing the Personalities and moving on to Fate. 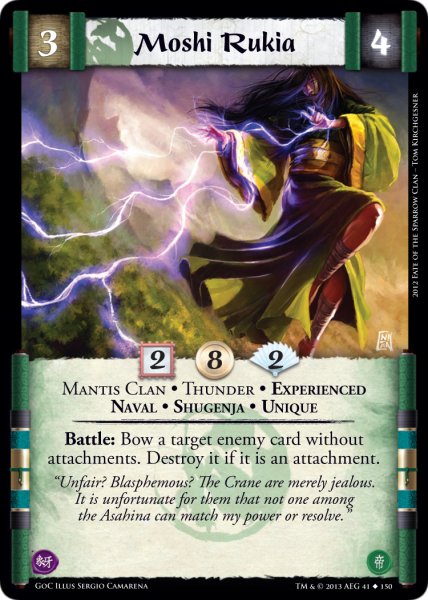 This leaves us in a similar spot to the Unicorn two weeks ago – do we go off into Shugenja? We can happily do 12 Shugenja (the 9 listed above, plus the unaligned Komori). And all of the Moshi are Naval, which works pretty well with Spells. As Spells we could get (all for free) Fear 3/4, Force jab 3/4, straighten a card, Unholy Strike, or bow an enemy card without attachments. And all can be used over and over again (if our Shugenja survive, anyway). We still get another 5-7 Personalities off of our list, but as is standard for Shugenja we’d be losing Force efficiency – we can’t put 12 Shugenja and Sasada and Gombei and Teihiko and our Uniques/starter deck rares (not to mention Gosho and Takuya). When our Shugenja lineup is clicking with our Spell lineup, it could be reasonably potent – but if the shugenja show up without the Spells, or vice versa then, well, then that ranges from subpar to good game. 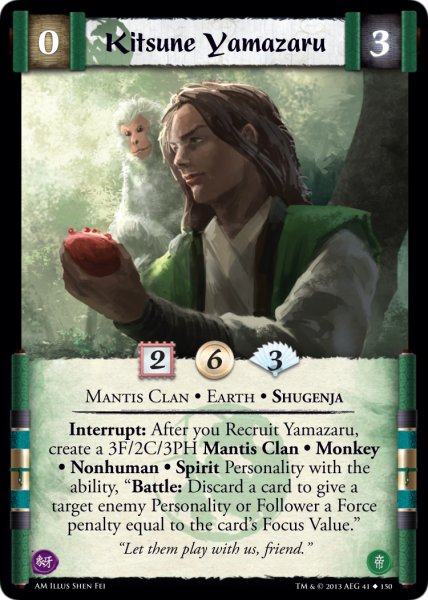 Last time I just backed off the Shugenja. This time I think it’s worth going for, because we can pull in a few more Shugenja and get the deck to the point where we’re just always going to have one, even if our stats become a bit more suboptimal. However, it will cost us the possibility of using Gidayu Sensei, because we’re going to have to venture into the Kitsune, who (along with some of our Uniques) demand that 2HR. It will also give us reason to pause about any cards with an honor loss – we only pick up an extra 1 ping from Nexus, but the Mantis Shugenja side of things needs to keep its head above the starting point and will only be getting 2 per Proclaim.

Bringing these two on board will give us 18 Shugenja, and I think we’ll stop there. My next choices would be The Dark Naga or Yotsu Shinzai, but Mantis have enough solid non-Shugenja that I don’t need to run an expensive guy with honor loss, and Shinzai’s low Chi reduces what I get out of most of the spells.

That’s 17 “Holdings” and 22 Personalities (because we have to include The Shakash, or course), and I’m going to go ahead and make the last spot this bit of cuteness: 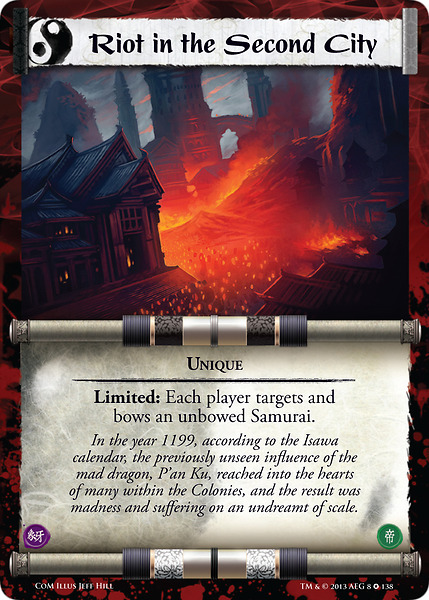 Riot in the Second City

We only have two Samurai (Tochiko and Tsuruchi), so chances are that when it comes up the Riot will bow two enemy Personalities.

Now let’s switch over to the Fate deck, where we can start with our Spells (the whole reason we’re running Shugenja, after all):

The first batch are more strategies than attachments – they’re free, and they aren’t going to stop our Shugenja from getting shot in the face or otherwise smashed. Overwhelming Power and Blade of Storms, on the other hand, are more like other attachments, basically giving +2F for 1G. In this deck, with only Thunder Shugenja, Overwhelming Power may more frequently be better, because it adds the Force bonus before any potential opposed battle without using up Naval, but beggars can’t be choosers. I’m going to skip Fueling the Flames, but slot the rest of these in, which takes up 22 Fate slots. 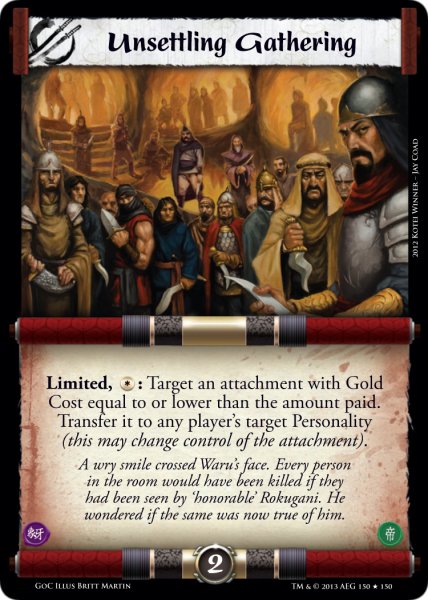 Before we go back to the usual well for the rest of the Fate deck, lets see what other specialty options we have. First, there are the Rares from the Mantis starter deck:

Unsettling Gathering is the only one I’m interested in, although it is extremely good.

Some other options include:

It might seem kind of Strange to put the Kata here, but it gives us a lot more flexibility with our mostly attachment Fate deck, and it shouldn’t be overlooked just because there’s a much better Rare option that’s unavailable to us. And Wrath of Osano-Wo is a good enough kill to be worth bowing for (especially if we get to bow Yamazura). Ancestral Armor of the Mantis, with an effective gold cost of much less than 8 and the ability to produce 3-5 a turn from then on out, is a deal. 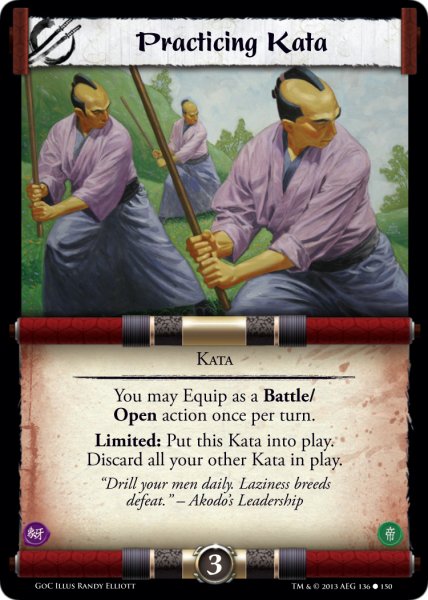 If we ran all of that (with Practicing Kata as a one-shot), we’d be at 28, which leaves very little room for the staples we’d like, and also for a few more attachments. So we need to examine the staples in light of our Spell selection to see what we really need out of that, and also whether the +2F Spells will get the job done as attachments, given that we will often be unable to take advantage of the 1G costs. 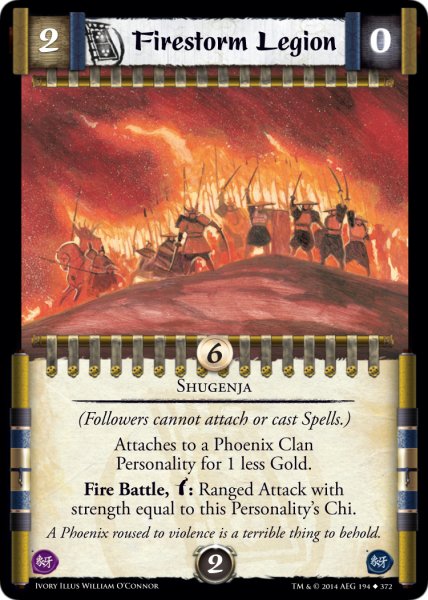 Our Spells already give us bow and force reduction and ranged attack supplements and straighten. Unfortunately, that doesn’t overlap with our staples much, except for eliminating the need for more straighten. I think we’re going to need to go back and remove the +2F Spells – not only will we rarely be able to play them for just 1G, we don’t even have that many 2G-producing Holdings. And there are way, way more cards we want here than we can fit in 12. Removing those gives us 18 slots:

OK, OK, Firestorm Legion is really too expensive, but as a two-of it will hopefully be limited to being dropped on 4C Shugenja.

The Fruitful Port of the Mantis 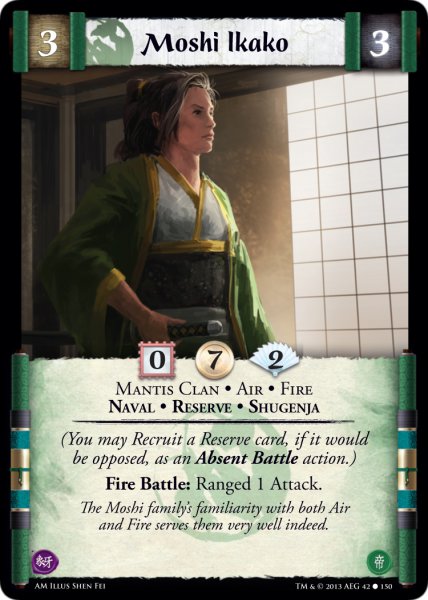 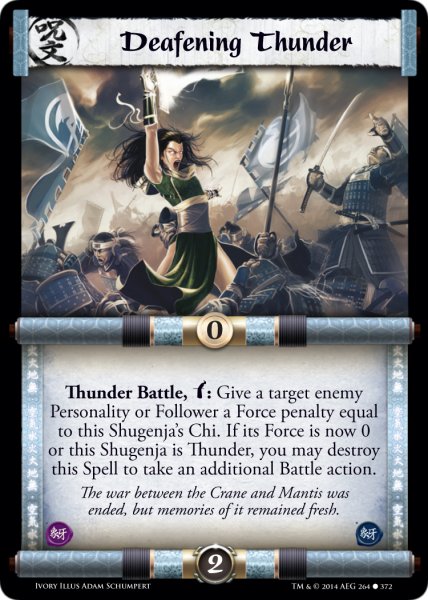