So, my request for questions to do a Q&A column from last time has generated a few good questions, but not quite the quantity I had hoped for so I’ll be postponing it a little bit. So there’s still time to get your questions in if there’s anything you’re dying to know as you get into this game.

That said, this week I’ll be looking at Gold Schemes. Not only is this one of the more difficult concepts, but with the change to Ivory it has had a major overhaul that even we old timers are having to rethink what should be done as far as a gold scheme. Thus, I’m sure there will be a higher than normal amount of wrong in this column: hopefully I can still inform even as I muddle through the ideas presented. Or yell at me in the comments. That works too.

So, gold schemes. For those unfamiliar, most non-strategy cards in L5R cost some amount of gold. To pay these costs you need gold producing holdings. To get these gold producing holdings into play, you need a gold scheme: a plan for your deck to reliably create the gold it needs throughout the game. For instance, a simple gold scheme would be to play 20 holdings that cost 2 gold and produce 2 gold (Simple. Not good. We’ll get into what makes a good gold scheme in a bit) and then plan to buy two of these holdings on turn one and four on turn two. 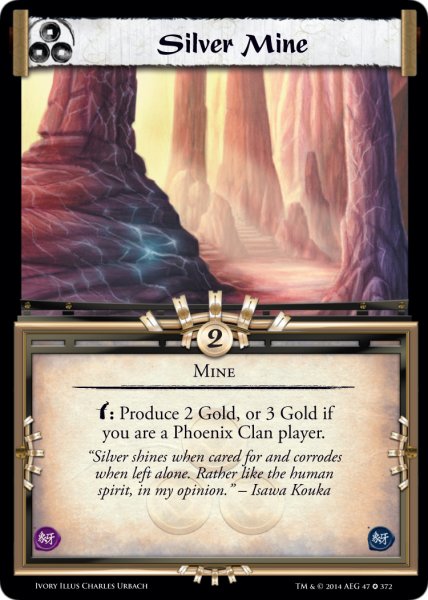 So, to get started let’s get a few terms out of the way to simplify the discussion. First is the X4Y notation you’ve likely seen. This refers to the cost and production of a holding: X being the cost and Y the production. So, your clan holding would be a 243 while Nexus of Lies is 444 and Bamboo Harvesters is now a 342. With the new gold pooling, the sweet spot is X4X (or better) – that is to say, a holding that produces as much as it costs so you can maximize your return on investment.

Next, maximum gold. This is the idea of ending turn 2 with the maximum amount of gold you possibly could with a perfect draw. For a 4 production stronghold, this means ending turn 2 with 16 gold production by turn 1 buying 4 production worth – ending with 8 – and turn 8 doubling up again. I’ll leave the debate as to how much chance you should leave, but generally speaking you want to maximize your chance of maximum gold when designing your gold scheme, but understand that each holding you add to your deck so as to increase the odds of maximum gold, the less room you have for other important cards like, say, personalities. Thus the debate as to what is an acceptable rate and if it’s even worth trying for maximum gold.

Which brings us to the idea of Slots. Each deck has 40 slots into which to put your cards. (I get silly and use 42 slots. I am not a good player: don’t follow my example) A deck might have 22 slots for personalities, 15 slots for holdings, leaving 3 slots for events. Depending on the builder, inefficient holdings may count against these slots – Oracle of the Void for instance, does not produce gold so does not count as a holding slot. This is where you start getting into really fancy and advanced math which are outside the scope of this article: short version, different gold schemes will have different number of slots for holdings to hit the sweet spot of maximum gold. We’ll cover this in a bit, after we get a few more basic concepts.

Gold schemes: so back to gold schemes. Right now, for 4 cost strongholds, the primary gold schemes are 242s, 444s, and 343/141s (3/1 scheme). The key of any of these is having the majority of your holdings being of the type mentioned, with a few outliers for their ability. For instance, you may have heard of Jade Pearl Inn being treated as a 444 since it fishes out a 141, letting you play some 141 utility holding. But that’s advanced play: right now we’re looking at the basic schemes. Sadly the 444 scheme is not playable yet (not enough 444 holdings) but once they release a few more that you can play 15 holdings it becomes the most reliable at low holding counts of the three. 242s is the next reliable, simply because any two holdings succeeds: 3/1 needs a 3 and a 1 each time to maximize. Not that you can’t splash other holdings in as needed, it’s simply the majority that falls into your planned scheme. All that said, often the choice is best made based on your needs: for instance, a dishonor deck’s utility holdings are at 1 cost so it is better served with a 3/1 scheme. 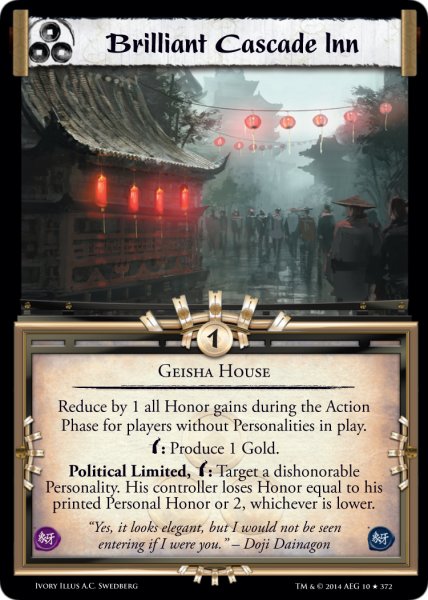 Which transitions briefly into the deck use conversation. In short, you should tailor your gold scheme to what your deck is doing, or vice versa. For instance, if you are playing the straight 444 scheme, a 5 cost attachment and an 8 cost attachment have very little difference: barring other cards to play in the open they both fully cost you two holdings. If you only have one battle action that costs gold, even if it’s 1 gold, it costs you as much as your smallest holding. Just something to keep in mind as you work on your gold scheme: it’s not done in isolation.

Back to schemes. Generally, for optimal flow, you’ll want between 15 and 18 holdings. I’ll let smarter people than I do the fancy maths to figure out what the numbers are like. Chris keeps telling me that a 16 count 444 scheme has, like, a 90 something percent chance of maximum gold. With all of these, your percent chance becomes a question of how much are you willing to dilute your deck. For 100% chance of maximum gold in a 444 scheme you should run 33 holdings: worst case is you see all 7 not holdings in those first two flips leaving you still 1 to find. This deck is obviously untenable. You’ll have to accept some amount of risk of bad gold: it’s up to you how much you can stand. The best way to really get a feel for this is what’s called “fishbowling:” shuffle up your deck and then run the first few turns against a fishbowl (Otherwise known as “goldfishing” – Ed.). See how your gold flows: can you afford personalities when they start showing up? Can you buy the attachments you need? It’s not the same as a live opponent but it’s still a good first pass for if your deck feels right.

I think I’ve rambled on enough for now. Hopefully you have a better idea of what people are talking about when they discuss gold, and how to construct it in your decks. As always, feel free to ask questions in the comments. Once I get enough good ones (or just enough) I’ll do a Q&A column. So you have that to look forward to/dread.

One thought on “L5R Newbie Corner: On the Subject of Gold Schemes”