Note: After this decklist was published, AEG announced that the two most important cards in the deck, Well-Defended Farm and Exotic Farmlands, are banned. I’m going to leave the article as-is, but this deck is now dead. 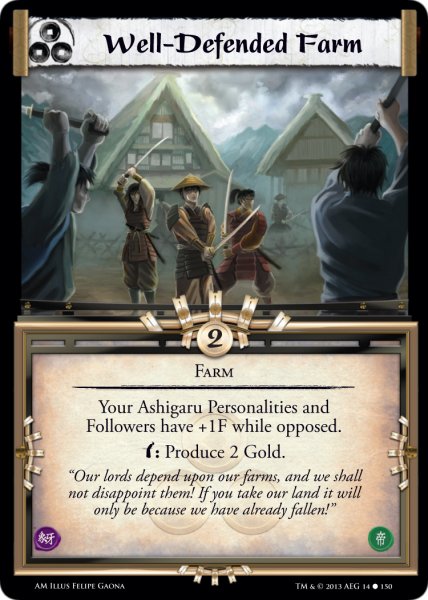 The Lion are the master tacticians of Rokugan, and the standard Rokugani army composition is drawn from the work of the Clan’s founding Kami, Akodo. And every good general knows that, while it’s the samurai who get all the glory, a real army fills up its numbers with warm bodies fresh from the rice paddies.  So who better than the Lion to see if we can bring the Ashigaru to a budget deck (real answer: Crane, but I already did a Crane deck)?

Believe you me, you’re going to see hordes of Ashigaru early in Kotei season this year. Figuring out how to make an Ashigaru deck is not tough.

Step 1: Search l5rsearch.com for every card with the word “ashigaru” in the text.

Step 2: Put them all in your deck.

See, that wasn’t hard at all! In full Ivory constructed, this gives you four Followers, a Personality, a Holding, and a Strategy: 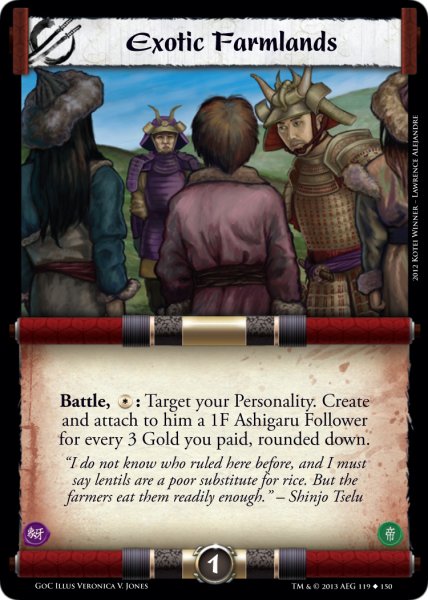 OK, and it’s a little more complicated than that, because you should also put Myuken in (so he can pretend to be a Rice Farmer) and Family Dojo.

So, how does this translate to a budget deck, where we don’t get any rares or promos? Pretty well, it turns out. You lose two of those cards (Rice Farmer and Armed Rice Farmer), but only losing two cards out of nine is pretty great for going from full constructed to a budget deck. And they aren’t the most important cards either – I’d say you’re only losing one of the four best of those cards. The single most significant card for this deck is Well-Defended Farm, which provides a blanket Force bonus to all of your opposed Ashigaru. Losing Family Dojo is the biggest sting, but Well-Defended is more important. The other potent card you get to keep is Exotic Farmlands, which can drop a lot of Force really quickly if you’ve got a Well-Defended or two out on the board (again, not quite as much as if Family Dojo got to come and play, but pretty good for budget land). Finally, you get to keep Frontier Farmer, who can be both recursive and big in this deck.

So we can start our Lion Ashigaru deck with the following: 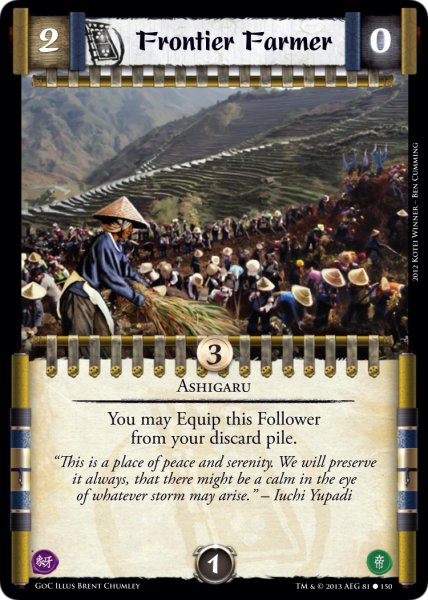 Of course, that’s only 18 cards. What I’ve talked about so far isn’t so much as Ashigaru deck as it is an Ashigaru package. What to do with the rest? Swarm! You’re playing lots of cheap Followers, so getting in there and smashing face quickly is the most natural plan. Plus this is going to be a Lion deck, and Lion and “attack aggressively” go together like a lime and a coconut.

Before we delve into our commons and uncommons, let’s take a glance at what rares the Lion starter deck provides: 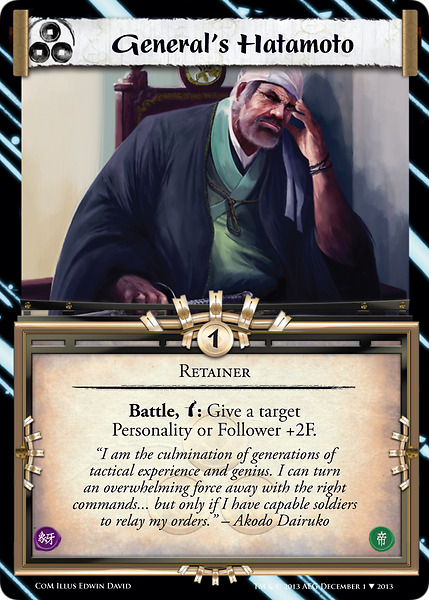 We will have better Holdings to run than Explorer’s Dojo, but Suana Dojo is an auto-include for Lion. Yoshimoko will probably fit, but Misato and Morito probably won’t fit the style of deck we’re going for. And most of the rest is Tactician-focused, which is just not going to feature in this deck. So mostly nothing from the rares.

But, the Lion starter deck does randomly include promos as well:

The Hatamoto should be treated as an Event, not a Holding, but it’s pretty good and fits in well with a swarm.

So, what sort of fast attack Personalities can the Lion send out along with Myuken (and Yoshimoko)?

Yeah, yeah, I know Zansho isn’t Lion Clan, but he’s great for this deck so I’m just going to include him up front. Everyone here is either really efficient Force, has a decent ability, or both. And at 23, we’re almost down to the quantity of Personalities we’ll want for this deck.

One thing that’s clear about this Personality set is that it’s pretty Scout-heavy, so it gives us some extra options in the Fate deck:

Advance Warning, in particular, is a really nice eject button.

Before we figure out exactly how many Personalities to cut, we should go back and look at Holdings. In addition to 3x Well-Defended Farms and 1x Suana Dojo, there’s:

Note that the A Matter of Honor learn to play set also has copies of the 3-for-3 Traveling Market promo, but I’m not assuming that everyone owns that. It’s possible to add some 1G Holdings to try to do two-Holding starts when you aren’t getting one of the 3G producers, but I think you’re better off just leaving this as it is. The deck is full of cheap guys for a reason, and you can already have General’s Hatamoto on occasion to use up an extra 1G.

With 15 gold-producing Holdings, 2x General’s Hatamoto, and 23 Personalities, we now have a deck. Since we will hopefully be buying a lot of Dynasty each turn, we should be better off sticking to that higher Personality count instead of trying to force in more Events.

Turning back to the Fate deck, we have 25 slots left after making room for the Ashigaru package and Advance Warning. We can go ahead and put in some obvious choices:

I’m not sure if A Champion’s Tactics is really more helpful than Back to the Front (not a lot of actions on our Scouts), but we have two eject buttons that straighten, plenty of Scouts, and I’ve used Back to the Front all over the place already. 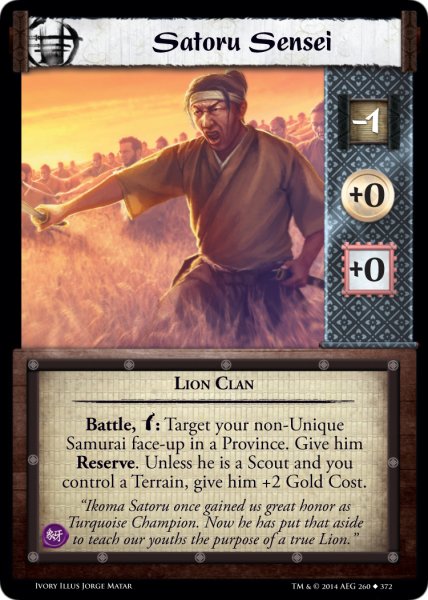 We already have 13 Scouts, and we’re going full offense, so Satoru Sensei is something to include, which means we’ll need Terrains. Conveniently, there are plenty of good ones anyway.

Six is sufficient – we don’t want to dilute things further just to make the Sensei more efficient. Note that I’m passing on Lonely Battlefield despite some synergy. It just doesn’t do enough for us.

That leaves us with 35 Fate cards, and 5 slots left. We’re relatively covered at this point, so we can go all-in on the early attack and have a bit more proactive:

The Honorable Garrison of the Lion
Satoru Sensei 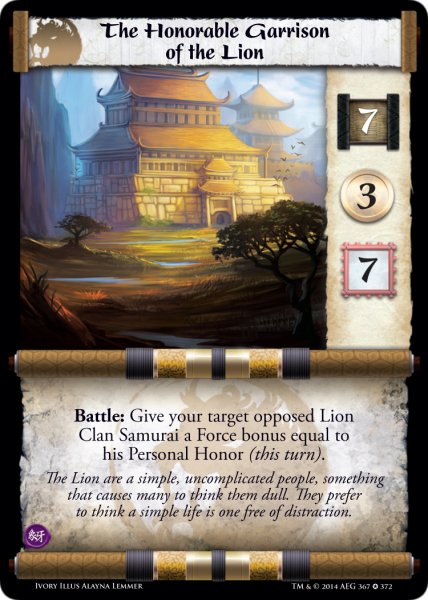 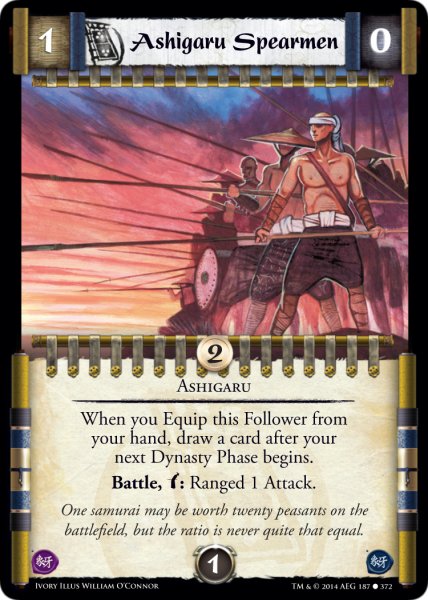 4 thoughts on “On the Cheap – Lion Ashigaru”