Kotei season 2013 is still going strong. Spider and Scorpion have put up big wins, with Crab, Phoenix, and even Unicorn making strong showings. Kotei seasons are extremely fun to participate in because the environment constantly evolves and changes. In keeping with that idea, I’m looking to expound on three more very competitive decks this Kotei season.

Law of Darkness Dojo has been one of the biggest sleeper strongholds in Emperor Edition. Introduced all the way back in The Second City, the potential of this stronghold has remained enormous. As James Matthews ably proved at the Tulsa Kotei, it also has some very strong matchups against big unit military and Temple of Purity decks.

The essential idea behind the deck is to make your opponent lose 8-14 points of honor per battle. With the suite of courtier actions, and solid personalities like Bayushi Wakui and Bayushi Irezu to eat the opponent’s actions, the deck can reliably punish even The Forgotten Temple in battle. Events like Successful Bounty dramatically accelerate the deck’s win condition, and with static dishonor losses it is very easy to provoke an enemy into a poorly timed attack.

Its weaknesses are those of many other dishonor decks: once you’re past negative 20 honor, it comes down to an actions battle for the last province. If you can get one or two Bad Kharma out of the opponent’s deck before the final swing, all the better. Certain variants include the Charter of the Legion of Two Thousand and Recruitment Officer to force out more presence; essentially the idea is to have as many disposable personalities at the battle as possible in order to minimize risk to valuable Courtier personalities. Open phase control in the form of Kitsuki Judgment or A Threat Enacted can prove difficult to deal with; in Judgment’s case a poorly timed Bad Kharma can give you a free Judgment because seppuku cannot be negated. Without question, though, the most dangerous card in the final battle becomes The Power of a Word. Its ability to send three units home is powerful, and there is little blanket negation to stop it. Harbor of Kalani’s Landing is one potential answer to that kind of threat. 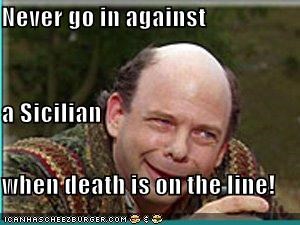 One final note is that if you are at positive honor (or not in danger of going to negative 20 from their Limited actions), DO NOT DECLARE AN ATTACK WHILE SUCCESSFUL BOUNTY IS UP. No matter how good an attack might seem, LoDD will make you cross if you swing into them while Successful Bounty is active. I have seen decks go from positive 7 to negative 20 in one battle. There simply is no win in attacking while Bounty is active, especially if LoDD is holding a hand of six or more cards.

Lion swarm has ever been redoubtable, and this year’s take on Lion Scouts is no different. Thanks to the reusable search granted in Torn Asunder, Marshaling Fields has thundered into several high placements so far this season. It’s a powerful midrange swarm deck that can simply overpower decks focused on large personalities or lots of kill actions.

The biggest key to the deck is Ikoma Shizuka. He allows for search of terrains and regions, while also being cavalry, at a price point that is boxable for Lion. This ensures easy access to Scout-based kill in Unstable Ground as well as regions like Shinden Shorai, Interesting Plains, and Natural Aviary. This access to toolbox effects ensures that the deck will have the answers it needs to a given situation. Even if Shizuka dies, the deck can still search for needed terrains with Gozu, though that occurs in battle and is somewhat easier to deal with.

Defeating Marshaling Fields requires the ability to shut off their terrains or outforce them in battle. Cards like Ancient Feud and especially Brawl throw a monkey wrench into the setup the deck requires. Negation or delay can also affect the deck as it has comparatively few kill actions. Wide Valley helps to ensure that the swarm of personalities stays around, but follower decks with cards like Deadly Orders and Harsh Taskmaster can take advantage of situations like that.

Kyuden Hida XP, once the terror of Celestial Edition, has roared back into prominence with this Kotei season. The Crab scout personality base remains efficiently-costed and with holdings that are able to generate personalities the deck can quickly get out of hand. It can effectively down other swarm-based decks thanks to its plethora of ranged attacks while using powerful Scout actions against harder matchups.

The deck’s strengths are a combination of personalities like Nijugun, effects like Recruitment Officer, and the protection afforded by the stronghold. The followers created by Kyuden Hida’s reaction give the small personalities protection against most of the in-battle kill in the format while simultaneously giving them expendable ways to bow for cards like Unstable Ground, Disrupting Communications, and Requesting Reinforcements. Seeking the Truth allows the deck to recover spent fate cards at reaction speed, as well, enabling it to maintain momentum and access to necessary cards. Nijugun gives access to Cavalry for the deck, which combined with the wording on Recruitment Officer can allow the deck to threaten several provinces early.

Large personalities, especially Oni, can present issues for the deck as it has relatively few answers for issues like Gozaru no Oni and Ekichu no Oni. Kill through attachments, like A Stain Cleansed or Steel on Steel, can also present issues. Another key issue is that Kyuden Hida’s reaction can only be used at one battlefield, so if the deck splits early you can bait out the usage of the stronghold at one fight and then destroy a naked army at the other. Attachments and redirection provide answers against most of the deck’s kill actions, so in a pinch cards like Blade of Champions could be effective answers.