As Strange Assembly has grown over the years, we have expanded from just being a podcast about Legend of the Five Rings, to some limited general tabletop coverage, to more written content on the website, to even more general tabletop coverage, to Netrunner coverage, and to even more written content on the website. Over that time, however, we have maintained one single podcast feed, even as we started distinguishing individual episodes by the their subject matter. 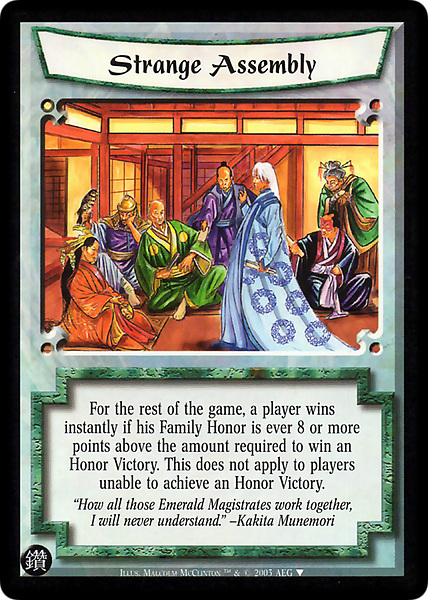 We will, as always, have the primary feed, which will contain all of our episodes. If you’ve already subscribed to Strange Assembly through iTunes or another means, this is the feed you’re already getting. If you look at the menu bar above, however, you’ll find a drop-down menu that will give you links to three other, more limited feeds.

First, there is a Legend of the Five Rings feed. This will cover anything L5R-related – the CCG, of course, but also the story, the setting, and the RPG.

Second, there is a Netrunner/LCG feed. As you can tell from the title, this will primarily be a Netrunner feed, although this will also be the home for our more limited Star Wars LCG content. And, should we happen to cover other LCGs in the future, those episodes would show up here as well.

Third, there is a general tabletop gaming feed. This is, essentially, everything else = be it a card game, board game, or roleplaying game. It will primarily be reviews, previews, and interviews concerning games that are not the L5R CCG or the LCGs.

Some episodes will overlap. For example, an episode concerning the L5R RPG would appear in both the L5R feed (because it is about L5R) and also in the general gaming feed. Additionally, many of the old episodes, which have also been sorted into the individual feeds, appear in two or three feeds because they cover a broad range of topics – this could happen again, although as you can probably guess from this year’s content, that won’t happen often.

You may also notice that the menu bar has sprouted a few more specific options – most notably L5R, Netrunner and Reviews. These are duplicative of features that were already available in the widgets section to the right – clicking L5R or Netrunner will take you to posts that were given those tags, and clicking on Reviews to any post in that Category. As with the distinct feeds, these links are being added to make it easier for readers to access the content they’re most interest in. The additional options – Interviews, RPG and Star Wars – were selected as ones that I thought might be handy for the audience.

Please, let us know what you think of these changes – of the podcast feeds, and of the menu items. Should the feeds be arranged differently? Should we have just stuck with the single feed? Are there particular tags or categories that you’d like to see show up on the menu bar? Maybe we should just have “tags” and “categories” on the menu bar with a drop-down menu? Maybe you’d prefer that we just reduce the number of menu options because they don’t play nicely with viewing the website on your smartphone? Seriously, I’m not going to claim to have any expertise at website design, so let us know what you think – here, on Facebook, on Twitter, or via e-mail.

And thanks for helping make Strange Assembly a success these last three years!