Aftermath is the latest expansion for Legend of the Five Rings (released November 2013), and the last before the arrival of the new Ivory Edition base set and all of the improvements that brings. Following the pre-Ivory standard, Aftermath is sold in 11-card packs, 48 packs to the “box” (Aftermath follows Gates of Chaos with a tin for a box, and as noted in my Gates of Chaos review, my guess is that the tin thing will not be around long).

As with its predecessors Coils of Madness and Gates of Chaos, examination of Aftermath requires a bit of prognostication. Although we basically know all of the rules changes at this point, it’s difficult to make predictions on how the new environment before the new base set hits (which will probably double the size of the card pool).

Insights Into The Future

We see several new mechanics in Aftermath. They include: 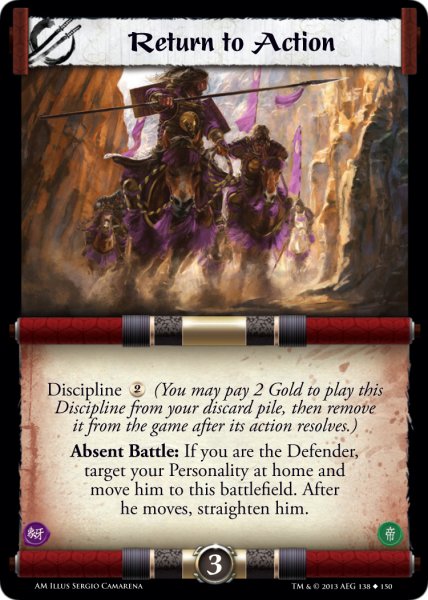 –          Discipline: Akin to the popular Flashback mechanic in Magic, Strategies with Discipline can be played from the discard pile for an additional cost, and are then removed from the game. Just remember that you still can’t take the same action on the same card twice in one turn. Return to Action, in particular, seems very good, as cards that move-in and straighten are not exactly all over the place so far in Ivory.

–          Reserve: A Reserve card may be recruited into your army as an Absent Battle action if it would be opposed. Reserve has already been decried as both broken and useless, so it’ll probably be somewhere in between. Although a couple of Reserve Personalities give cost breaks if you’re the Defender, the most basic use of the mechanic will be to add an extra attacker to your army.

In addition to distinct mechanics, we learned some other things. For example, we learned that prediction of the demise of created Spirits (in my Gates of Chaos set review) was sadly mistaken, as there are multiple cards in Aftermath that create them. There’s also a multiplayer-only card in Aftermath (Ningen’s ‘Treatise on the Nezumi’), and the presence of a specific “Multiplayer” keyword on its ability may mean that we’ll be seeing a few more such multiplayer-only cards. 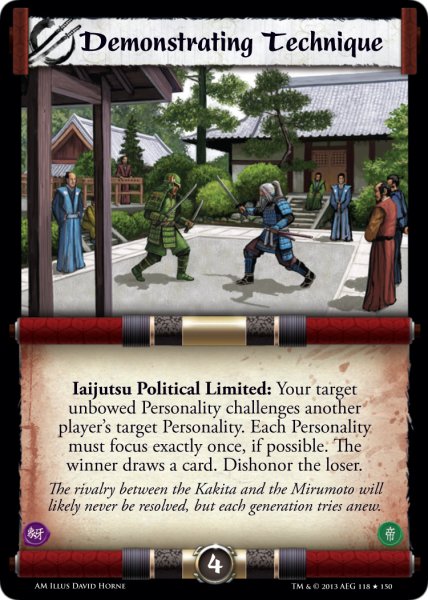 –          Absolution: Almost every L5R environment sports some sort of Event negation, and Ivory has its first one in Absolution. In the past this sort of meta card usually tacked on a second ability, but Absolution features the still-new Kharmic mechanic.

–          Breaking the Rhythm: Shameful Injury was playable in its day, and with an increase in the prominence of Force pumps (including unopposed ones) and stabs, Breaking the Rhythm could see Ivory-arc play, especially in dueling honor decks that can take advantage of the focus effect.

–          Demonstrating Technique: It’s a Limited duel, and those are always something to keep your eye on. This one will replace itself, and lets you get off a guaranteed focus effect – plus whatever other duel-triggered shenanigans you’re running. Oh, and it’s a 4FV. Will likely be a staple of dueling decks at the launch of Ivory arc.

–          Hitomi’s Devotion: With a relative dearth of kill effects at this stage of the arc, death during battle resolution may become much more common than it once was. Which makes Hitomi’s Devotion, and the immunity to that death it grants, a potential power card … well, assuming there are enough Earth Shugenja to make a deck around, anyway. Will be considered by any player fixated on assembling a Voltron unit. 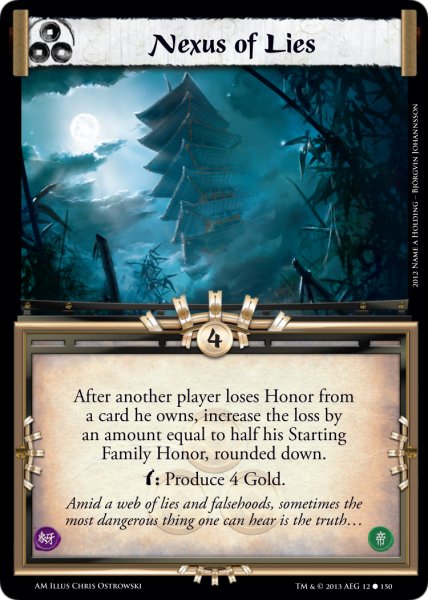 –          Iuchi Wattu: A pretty lousy card should you choose to bring him into play, Iuchi Wattu’s ability to discard himself from your province and let the province refill face-up effectively lets you play with a 39 card deck, and out of any Clan.

–          House of Prophecy/Jade Pearl Inn/Nexus of Lies: Aftermath continues to lay down what appear to be the foundations of the new Ivory arc gold schemes. I’m not too excited about House of Prophecy and its trading of gold efficiency for an early card (others are), but Jade Pearl Inn provides a lot of flexibility in a 3G/1G Holding scheme, and Nexus of Lies could have a significant environmental impact, making it prohibitively painful for high-honor decks to player cards with otherwise small honor losses.

–          Planted Evidence: Kolat Assassin returns! Except this time he’s going to get a lot more work from the Scorpion and Spider (who both have Ninja and who both no honor, or close to it) than from others.

–          Respect/Unchecked Fury: What the rules taketh away, the cards giveth. If you’re playing a dishonor deck, Respect will bring back the economic punishment when your opponent doesn’t meet the honor requirements on his Personalities (and you can Kharmic away extra copies). Unchecked Fury brings back the ability to attach a Spell on the fly during Battle, and then immediately follow-up (and the follow-up doesn’t even need to be the Spell’s action). It isn’t Kharmic, but unlike ever other Kata it doesn’t discard other copies of itself, so you can pile up extra uses of the action. 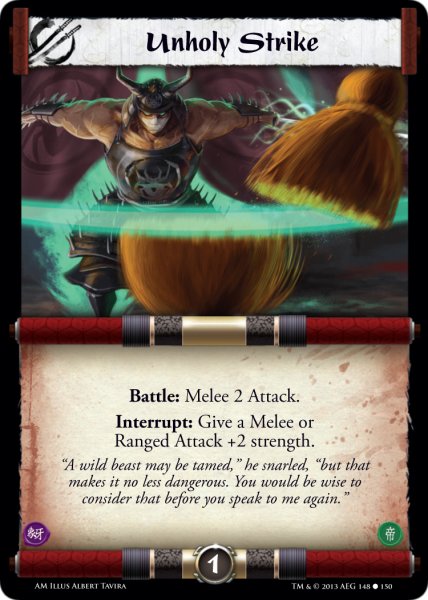 –          Suffer the Consequences: This one seems like really strong attachment destruction. It destroys most Ivory-legal Followers and Weapons for free. And even when it isn’t free, most Followers/Weapons cost more gold than they have Force, so you’re still gaining an economic advantage. Your opponent might not have attachments at all, but even then you can Kharmic away Suffer the Consequences.

–          Unholy Strike: This common should be all over the place in Ivory Edition, sniping little guys on its own and letting other Melee/Ranged Attacks just laugh at the supposed protection of 5F.

–          Yojimbo of Earth: Cards that permit repeat creation of 1F Followers have been playable even in Emperor arc. That doesn’t mean that Spells and Regions can just be switched about willy-nilly, but this could be a pretty handy effect.

–          Yoritomo Yashinko: Is massively overpowered. Not sure why they print a card like this that they know is well above the curve (Yashinko costs 2 gold less than the Crane and Unicorn Personalities in Gates of Chaos that do the exact same thing). 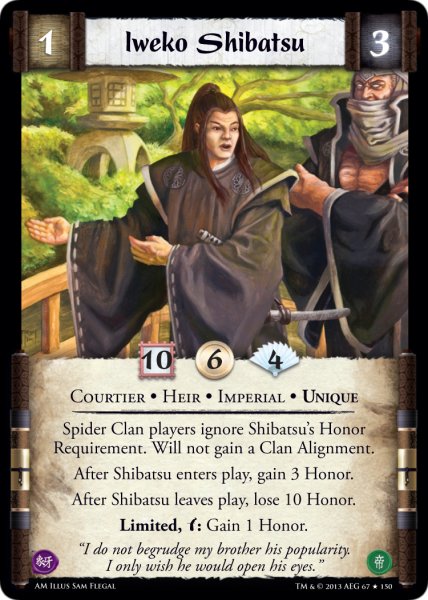 –          The Imperial Heirs: The two sons of Empess Iweko I – Iweko Seiken and Iweko Shibatsu – make their appearance as Personality cards in this set. They are also referenced in text and art quite a bit, as Aftermath further presages some sort of conflict between the two. At least for this set, their political differences fixate heavily on the Spider Clan, with Seiken despising them and Shibatsu being frequently depicted together with the Spider Clan Champion Daigotsu Kanpeki (on Shibatsu’s card, on Kanpeki’s card, and on cards like Changing the Game).

–          The End of the Legulus’s Legion: Gates of Chaos saw card versions of Legulus, rogue Yodotai Legion commander. In the fiction, Aftermath sees his end, but before he goes he brings several more Yodotai-themed cards including one of the last Celestials, The Inevitable Grasp of Conquest (for those not unnecessarily steeped in Legend of the Burning Sands lore, Conquest is the most important deity of the Yodotai).

–          More Mechanical Depictions of Clan Relations: A complicated state of affairs between the Mantis and the Crane is present in Aftermath, with some Personalities (Daidoji Tametaka, Yoritomo Yashinko) presenting a cooperation between the clans in the wake of their conflict, and others (Kakita Ujirou, Yoritomo Toganin) presenting continued hostility. 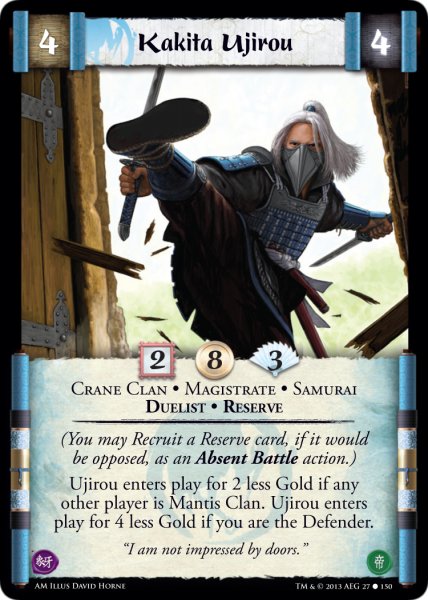 –          New Elemental Masters: Although we haven’t seen what’s up in fictions yet, between Master of Air Isawa Tsumaro in Aftermath and the new Master of the Void in Ivory Edition, it seems that there’s been some extensive house-cleaning in the Phoenix Elemental Masters. The current speculation is that all of the Masters who were involved in the P’an Ku affair are retiring as potentially compromised.

–          Kakita Ujirou: Apparently the son of fan-favorite Daidoji Uji (well, an alternate-reality version of Uji that … oh, nevermind, best we not get into that bit of silliness), Ujirou’s dramatic are and pithy flavor text have already made him a favorite of Crane players.

As with Gates of Chaos, Aftermath primarily looks ahead to the Ivory Edition, which we’ve just begun to see previews for. We will be much better able to assess the full impact of the set once Ivory Edition (and then Kotei season) arrive.