Today’s first Ivory Edition preview card isn’t just a reprint, it’s a the 11th printing of this venerable staple of the game. OK, OK, four of those printings were things like learn to play sets, but this is still the seventh environment that will be graced by the presence of Wisdom Gained – Jade, Diamond, Lotus, Samurai, Celestial, Emperor and now Ivory.

This preview is a double-bonus for me. The continued legality of Wisdom Gained seems very handy for the Dragon, whose new Stronghold gives them a leg up on enlightenment. In addition to my Dragon ties, I will choose to assume that Strange Assembly getting this preview is in honor of the recent arrival of my daughter Sophia. Wisdom gained indeed. Well played, AEG, well played. 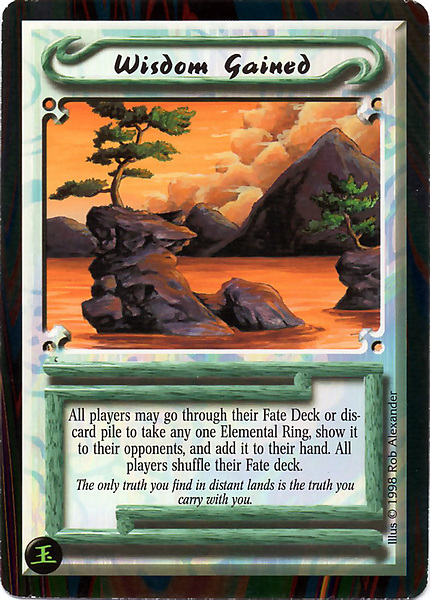 Making its debut at the end of the Hidden Emperor cycle, Wisdom Gained got to be part of a big bit of Wisdom Gained for AEG – that lesson being that Rolling Thunder was a really, really bad idea. On the other hand, the art is erroneously credited to Rob Alexander (it’s by Heather Bruton), so maybe it didn’t have that much wisdom to impart yet. 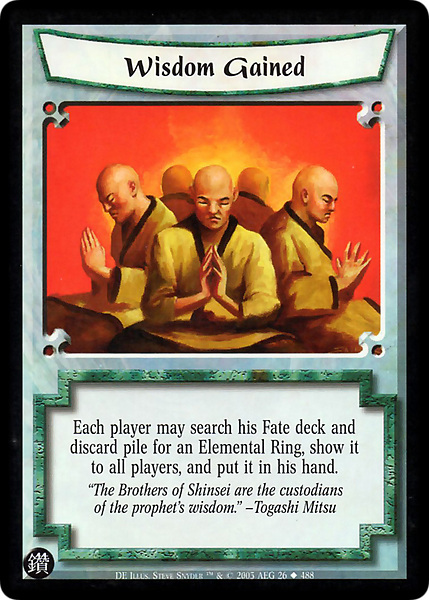 After going away during Gold, Wisdom Gained traded in its landscape art for some monks, which will become a recurring staple of the card’s artwork. You know what else reappeared in Diamond Edition? House of Tao! It’s destiny – all this time Wisdom Gained has been trying to pull House of Tao back into the fold, and with The Remote Monastery of the Dragon it finally succeeded.

This art/frame for Wisdom Gained stuck around through Lotus and Samurai Edition, but picked up new art to go with its new frame in Celestial: 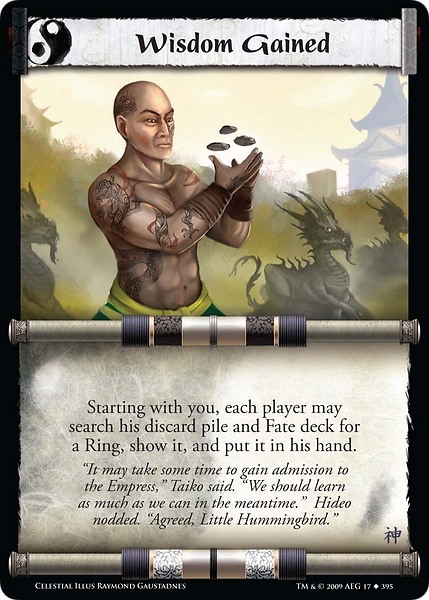 Too bad that Taiko and Hideo never accomplished much on the gaining wisdom front, eh?

And that brings us to the Ivory Edition version of Wisdom Gained, which sports shiny new art from David Horne:

Well, not shiny art, if we’re being literal, since there aren’t foils of uncommon cards, but you know what I mean.

So, will this get played? A lot of our previews lately have fallen in the “yeah, no” category. Or, if they’re lucky, the “wait and see” category. Wisdom Gained does substantially better. It will be played, because it’s pretty much always played by any deck that wants to get multiple Rings into play. And even setting aside those dedicated enlightenment players, you can bet Dragon will have reasons to go fetch Rings. Although, I’m guessing, probably not this guy: 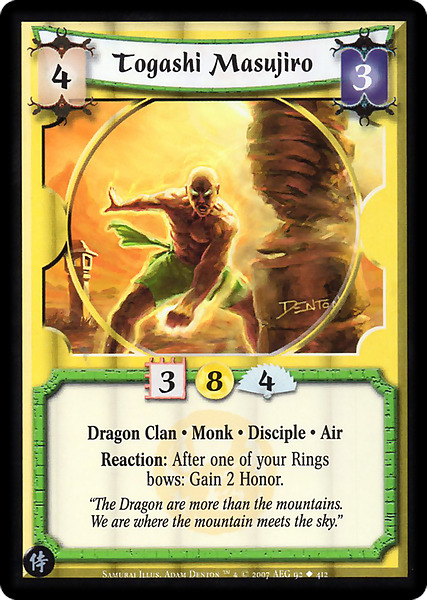 But a boy can dream, right?