In Rokugani spirituality, having your own Tao is seen as a mark of success and influence. Starting your own religious heresy? You’ve got to have a Tao. It’s like flaunting that BMW so that your neighbors know you’ve really arrived.

But all things have a beginning, and for the Tao, you’ve got to start with the Tao (but not “The Tao,” which comes later): 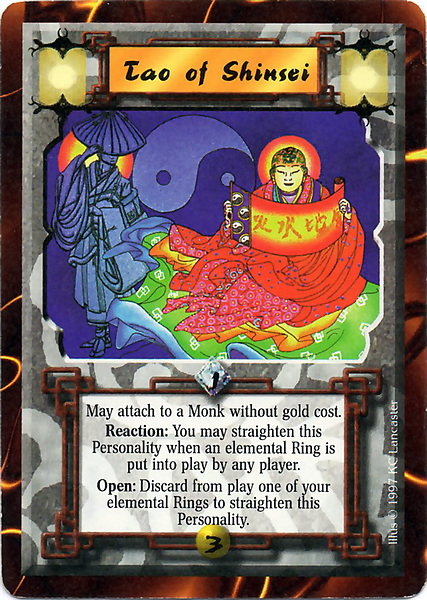 And, perhaps unsurprisingly, the Tao of Shinsei starts the trend of Tao cards interacting with Rings. The ability to chuck your Rings for a benefit doesn’t seem too terribly thematic – giving up enlightenment for a temporary benefit – but, then, all of the Rings these days let you discard them for an effect (they didn’t at the time), so apparently that isn’t too much of a thematic disjoint.

The other Clan War era Tao card had nothing at all to do with religion, so let’s just move along to …. 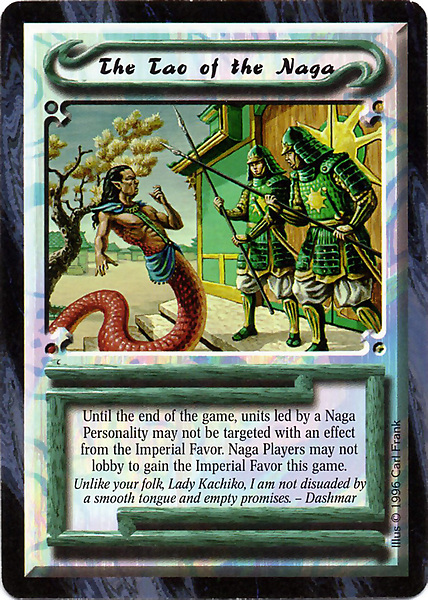 … that time they lost the Tao. Oh, Hidden Emperor, you were so loopy. First, the Tao got its own House: 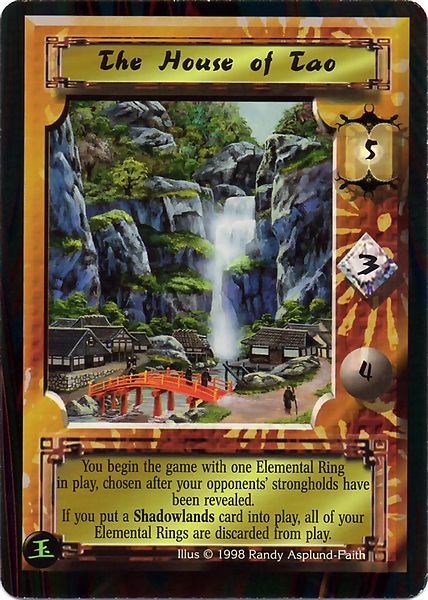 But then, like some manner of ungrateful child, the Tao ran away from home, and was replaced by the first False spirituality: 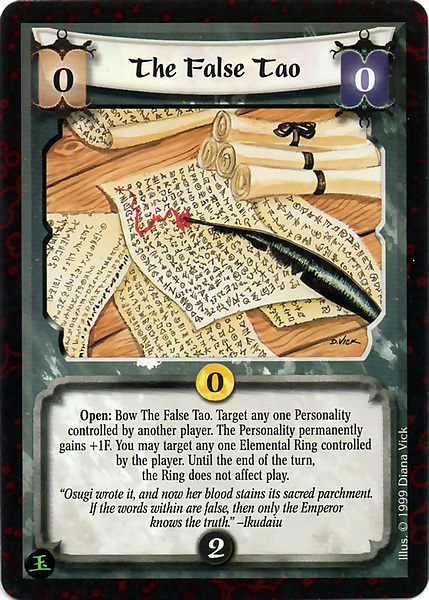 The False Tao, although rather narrow, has a nicely thematic effect – your opponent’s Personality gains a boost, but the player loses her connection to the elements.

Of course, it wasn’t too long before all that Lying Darkness stuff was dealt with, and so the Tao had to come back (well, half of it, at least): 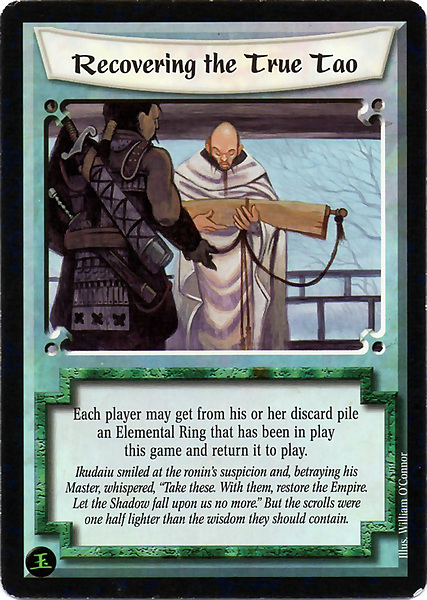 Now there is some nice, straightforward theme on a card!

And then another house for the “New Tao” (aka, the Tao we have left after losing half of our religion): 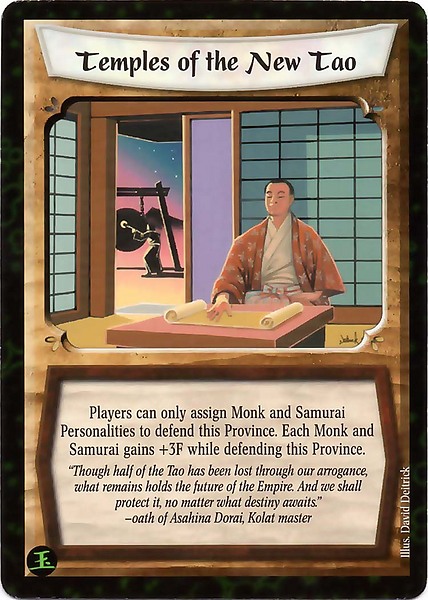 Look, everyone’s Miyoko! Another solid thematic entry – the New Tao is housed in this province, and your followers are not going to let it fall.

Unless you count the Dragon stealing a theme from the Brotherhood …. 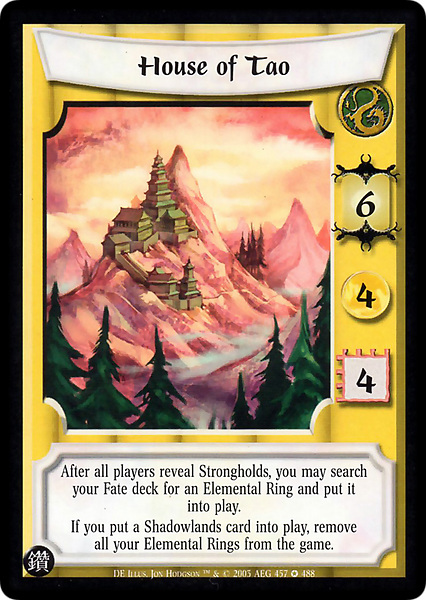 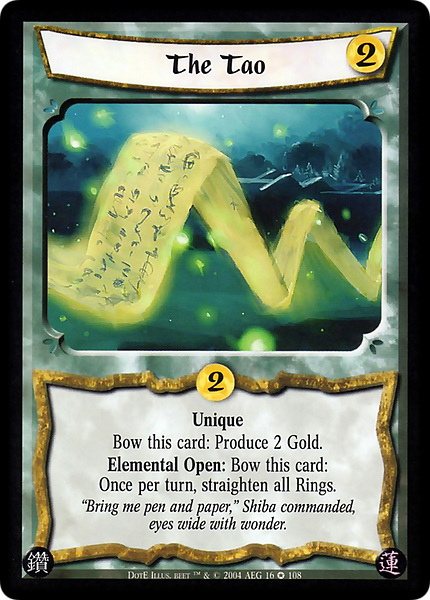 And we’re firmly back in the “Ring interaction” camp. Well, mostly anyway. The Tao itself was solid, but I don’t recall Scribing the Tao ever showing up: 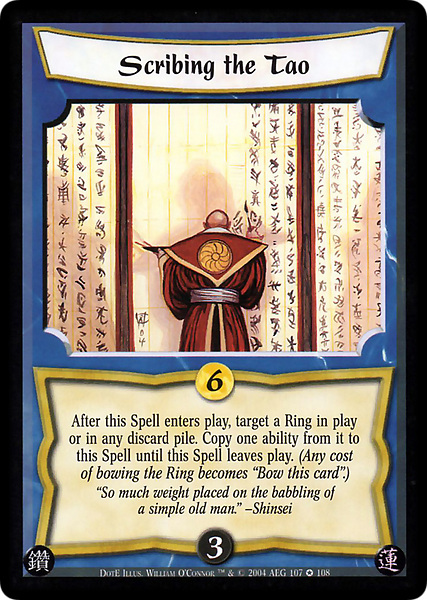 And, well, this random Kiho spud certainly wasn’t going to: 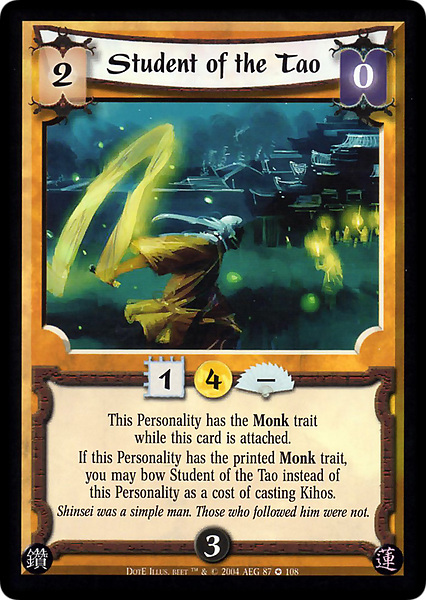 Thanks, I prefer my bowing alternative to go infinite, thanks.

But the Dawn of the Empire would lead into the “Age of Enlightenment” (Lotus Edition), so that must mean a heavy influx of Tao and enlightenment cards, right? 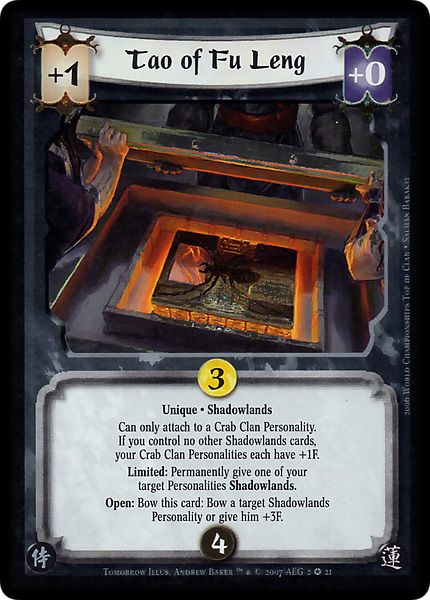 Oops, maybe not. Enlightenment through punching Oni, I guess. Luckily, the Crab are still using this to combat the minions of … what’s that you say? Stolen, you say? Oh dear.

So, let’s see … the last time a real reference to the Tao showed up was nine years ago, and “Tao” after that was the second not-actually-the-Tao (and that was six years ago). So we’re about due for a resurgence of spiritual purity, right?

Well, maybe if you squint so you can’t see the word “Fudo?” The Tao of Fudo does not, other than its title, seem to have anything much to do with this particular shallow facsimile of postmodern relativism – no Fudo keyword, no honor loss, and no limitation to False Rings. It can’t even be used by Monks, which is what all the Fudo guys are! I imagine this is so the card can continue to be functional even if Fudo loses his showdown with the Mad Dragon, but it does produce some thematic disjoint.

But will it get played anyway? Certainly not in Emperor Edition, I think – enlightenment has way better options than spending gold just to get straighten a Ring or get a Ring back in hand. For example, it might want to straighten all of them and get a Ring back for free and get another action to boot. As for Ivory, it’s impossible to judge – it’s a lower power level card, but that’s kind of the point. The remaining question is why this “Tao” shows up as a Spell rather than the usual Item, and whether it signals anything about the ability of Monks v. Shugenja on the enlightenment front in Ivory.

3 thoughts on “Preview – The Tao of Fudo (Gates of Chaos)”