You can now find a link to this preview, and all of the Ivory Edition cards previewed so far, in handy checklist form here on Strange Assembly. The checklist will remain part of the default menu options on the website until after the release of Ivory Edition.

Ivory Edition is generally (and correctly) viewed as a big powerdown from Emperor Edition. But today’s preview breaks a design rule that was in place for Emperor Edition, and so in a narrow way represents a power up. In Emperor edition, while there were some powerful redirection effects, they all had the limitation that they appeared on cards already in play. Ryoshun’s Guidance, Benten’s Blessing, Chugo Seido – all strong effects, but nothing from hand to surprise your opponent. You got a good redirection effect, but your opponent always knew it was there and could plan for it. About the only pseudo-redirection from hand was He’s Mine, which is restricted to duels and was irrelevant since duels themselves were largely irrelevant. 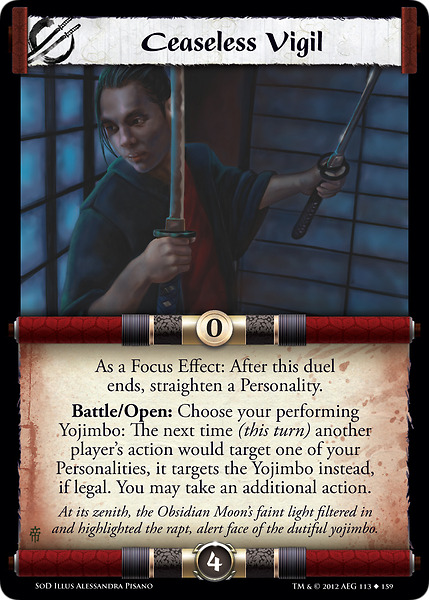 … which has a very strong vibe of wanting to simulate a standard redirect from hand, but not being allowed to go there. Well, guess what? In Ivory Edition, they’re going back there:

Bam! Didn’t see that coming, did you?

(note: Yes, I am aware that you saw that coming from a mile away. That’s what we call telegraphing.)

Of course, exactly how handy Final Sacrifice is depends on wanting to run Yojimbo (and they’re limited to Phoenix and Scorpion), but Final Sacrifice is a really strong effect if you have a decent number of Yojimbo in your deck. Note that, although the Yojimbo has to be a legal target, he does not have to be a meaningful one – you can redirect Fear effects or Ranged Attacks that are too small to hit him, you can redirect Force penalties when he’s already been reduced to zero Force, or you can redirect a bow effect when he’s already bowed. Even if you’re not getting big synergy like that, it can be potent just to preserve your power unit from the best action your opponent had to take it down.