Been a while since I visited the “On the Cheap” series, but it finally feels like there are enough non-rare/promo Followers out there to make a Commander deck that isn’t completely embarrassing (in bushi league, at least; it’s tough to be attachment-based in “real” L5R these days, unless you’re Nonhuman Spells), so I’m back to give it a go.

The rules for building this deck are what you’re likely to encounter in a local “Bushi League” format. No rares, no promos, no cards that are only available in direct-to-player sets (Forgotten Legacy, The Shadow’s Embrace). Cards that are fixed in the Clan’s starter decks (Emperor, Gempukku and/or an expansion) are allowed. I’m not sure how most Bushi Leagues are handling it, but I’m going to go out on a limb and say that anything from Honor and Treachery is permissible as well – it’s not expensive, and since it’s designed as a learn-to-play set, I think it’s reasonable to permit it even in a lower-level format like Bushi League. It matters for this deck because H&T includes a number of decent Followers. 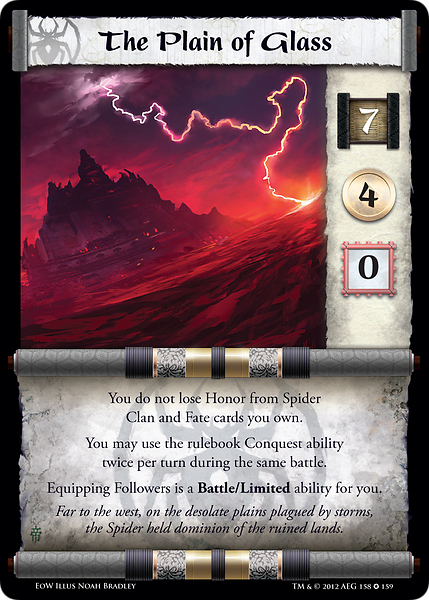 Starting Cards: There are two Spider Commander boxes, although you might forget it as the fixation on Follower Honor Requirements means that people tend to focus on Keep of the Dead. But when we look at the Followers available in this format that we’d actually want to play, it turns out that almost none of them have Honor Requirements. Plus they’re on the small side, and The Plain of Glass favors spreading the attachment love around. So we’ll go for the less popular expansion Stronghold for this deck. The basic versions of Bamboo Harvesters and Border Keep are a necessity (yes, there’s a version of BK in H&T, but it’s terrible).

We’re far enough along in the arc that a purely thematic Personality base is available if we want it, and there are actually a reasonable number of decent Commander-specific. But that doesn’t mean we can’t keep our eyes open for non-Commanders to include. Still, let’s at least lay out our Commander options: 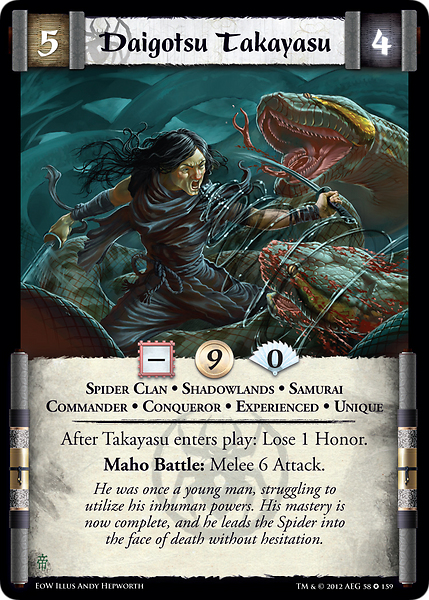 See, just the Commanders, and we’re already at more Personalities than we need. Which is good, because a few of those guys are lousy. The commons, in particular, make me wince, since Kendo and Shikenuro are raw Force, and Yamato’s ability isn’t great and he’s got the painful Brash keyword. The rest are livable, however. Bukaro and Hashibei (who’s mostly a Holding) generate cheap Followers, which helps Kazuko. Misaki’s Battle ability isn’t exactly great, but getting your Followers for cheaper is great, and Conqueror incentives loading up on one unit. Daigotsu Takayasu xp is just good here. At first pass, that would give be 14 Commanders for the deck. We’ll see later if that’s enough.

But what sort of non-Commanders might you want to consider? Let’s throw in prospective Unaligned guys while we’re at it.

Almost everyone is basically here for an ability (we don’t need to go out of theme for efficient Force), but the Ninja are the cream of that crop. Kanpeki is really expensive in a deck that’s already going to need a lot of Gold to run properly, but he’s still a house. Sakti and The Red Hunger are basically smaller versions – good abilities, but pricey (just not as good and not as pricey). Those big guys will also suffer from the fact that our big units want to be our Commanders, because they can Conquer (and we need two Commanders to take maximize the box) and take advantage of more unit straighten. Susaiken is a worthwhile singleton to help out late game. If we end up with a pretty common 21 guys (Hashibei is mostly a Holding, but that’s OK because we’re going to sink a lot of cash into Followers), we’d need to pull in 7 from here – sticking on the cheaper side of things would give us Susaiken, 3x Kobashi and … let’s stick with Ninube Onchi, because that ability is still great.

Holdings: Thankfully, the Bushi League Holding selection has finally picked up (especially handy since this deck gets no real mileage out of Rugashi Bazaar, which was a staple in the Bushi League decks earlier in the arc). Speaking of bushi, I’ll just note here that I don’t consider Bushi Dojo a worthwhile play – the extra money for Followers just isn’t worth the total lack of flexibility (and, as we’ll see below, our Followers don’t cost that much anyway). There are a solid number of Ports at Common and Uncommon as well, but unfortunately Sheltered Port is not one of them (it was Fixed in TSE), so the Port scheme isn’t too effective here.

OK, that really doesn’t look like an expanded selection, does it? But trust me, it is. We want to focus on the gold, and we probably want 15, so a good start is probably:

The Forgotten Bay Dojo makes it because I like free Force (it applies to almost all of the Followers). Old standby Prosperous Village will get the axe in favor of Small Library so that our large Holding quantity doesn’t hurt us as much later in the game.

We’re going to take a pass on Holdings that have to bow to get used (and don’t draw cards), so Incense Mill gets the nod over Indomitable Home and Akodo’s Grave. The final couple of slots we’ll give to Damaged Port on the off chance we can buy an extra 4G Holding on T2 (or Purveyor of Questionable Goods). Another option could actually be Farmer’s Market, given the number of card-drawing Followers that this deck can play. Or my old standby, Small Farm, which can help with tasks like a hand full of 4G Followers.

Everything Else: There isn’t a lot of selection here, but some options include:

The Scorpion Wall Is Finished would be up for consideration, but I’m not sure that you need to worry about mass card draw (or discard) in this format, compared to “normal” L5R. In Bushi League, I’d be happy with all five of these (possibly including more than one copy where possible), but we do want to maintain enough Personalities and Holdings. Maybe you could go down to 20 guys and 14 Holdings, but lets stick with only 4 “other” cards for now – Formal Apology, Rejected Mediation, The Tachikaze, and Low Market. Political/control decks should really be able to punish Commanders, so let’s reinforce the notion that meta should always be part of your default deck building.

Followers: The inclusion of Honor & Treachery really increases the quantity of acceptable Followers. Outside of H&T some considerations might be:

That’s pretty heavy on the cheap guys, but that’s just how the non-rares break out (O-yoroi troops would be the next best big Follower). Adding in H&T gives us even more lower-cost options:

Seppun Heavy Elite is pretty money for this deck. And card draw is good.

The thing, as always, is that you still only run a relatively limited number of attachments, even in an attachment-based deck. 14 is really your top end of consideration.

If we were playing Keep of the Dead, these calls would be a bit tougher, but running The Plains of Glass makes it easier to cut Uji’s Saboteurs and Khol Regulars – but, really, we were going to cut the Saboteurs pretty quickly anyway, and the Khol Regulars suffer from our lack of Cavalry. Village Guardian isn’t good immediately, so it could be the next on the chopping block, but we’ll stick with card draw for now (Clearing Crew is a viable option if you want to go even cheaper).

Non-Follower Attachments: There are a number of solid Weapons, but if we wanted to use them, we wouldn’t be making a Spider Commander deck. So in this section let’s give a shout-out to Dazzling Attire, which is never shabby. We’ll take a pass on it here because we can’t do that whole fetching it with Imperial Gift thing in Bushi League.

Commander-specific Strategies: I’ll break these out, but remember not to get too caught up in playing Strategy cards just because they are “in theme.”

Stockpiled Resources, The Power of One, and Unexpected Support are pretty much auto-includes here – free money, unit straighten or a battle action, and bow with built-in meta. Deadly Orders probably isn’t as sexy here as in full-on L5R, because your opening attacks just aren’t going to be as ferocious. Unsafe Passage suffers because our Follower’s Battle actions aren’t as impressive as we might like – but I suspect that this deck is going to end up short on move-in, so let’s not forget it.

OK, that’s way more Strategies that you could ever use – especially when you add in the “meta” options I’m throwing out below. I’m including the whole excessive list here because I think it helps show how much options have really opened up for generic sorts of military decks in the Bushi League format. We’re already at 23 cards, so we can actually start singling out cards that are just good.

Games of Will and Gold and Steel are up here, by the way, because their non-meta effect is key to making them playable, and is not simply some afterthought.

Aaaaand … I guess we’ll just leave it at that for now. Reckless Rush, Gold and Steel, and Brothers in Battle are our next to look at. I’d just throw Brothers in Battle in, but since this deck isn’t exactly spamming out Personalities, we may not have the three targets right away (and our deck has six Ninja in it).

A lot of the speciality meta shouldn’t be too necessary – hopefully we don’t need blitz meta, enlightenment meta seems unlikely to be needed for Bushi League, Events are of less concern, and effects that present assignment should be relatively rare.

Other things here may make you wonder “why is this in the meta section” – Retribution and Rocky Terrain, for example. Just me being pedantic again. There’s such a thing as anti-military meta too.

I’ll also go ahead and note that Know No Fear has made an appearance. I’d kept this out of On the Cheap decks because it used to be pretty hard to get for an Uncommon, but I don’t think that’s the case anymore.

We have attachments and Conqueror, so Retribution is pretty strong, and you can’t get far without running into military decks. Knowing that I’m going to throw in four Rings, that leaves me with one slot here, which I’ll make Ancient Feud, since this deck has no way to deal with Terrains so far.

Rings: The usual suspects are in play here – pretty much any military decks gets mileage out of Earth, Fire, Void, and Water, and we’ll use all of them.