For now, we’ll be bringing you combined posts containing the usual “clan tournament success” data and the clan-on-clan matchup data that’s used for the location-stealing during the 2013 Kotei season, which is the only part of the Kotei story aspects that isn’t being kept updated on the official Kotei results page.

Figures today are complete through all Kotei on the March 23-24 weekend, except for the Feeding Hills Kotei.

There’s a general reduction in cut-rate this week, based on the way the attendance broke down (for example, tournaments falling short of the numbers needed to activate the X-2 cut). Against that, the most notable movement was Dragon and Phoenix both dropping down – still respectable rates for both, and Phoenix still doing really well in the elims, but definitely some loss of steam. The noteworthy increases were Unicorn and “Unaligned,” the latter of which came on the back of a blitz deck out of the Imperial version of Journey’s End Keep. 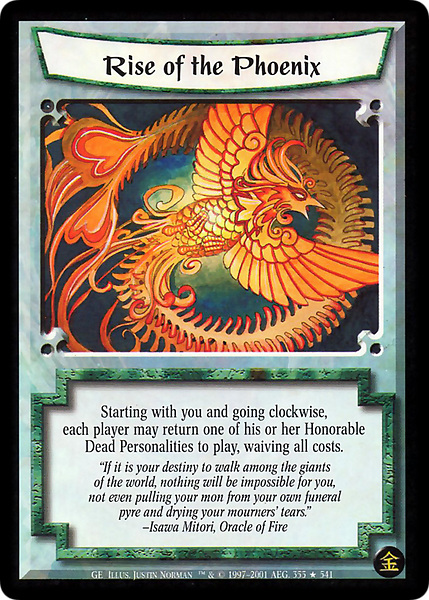 On the seizing locations front, the results based on current tournaments would be:

The Mantis have more people in the cut than the Phoenix, but they seem to either (1) get eliminated in the play-in round or (2) fall to other Mantis or non-faction decks. So right now the Phoenix, despite/because of their success would be on the hook to lose three locations, and are in the mix for two more. Which I think is more provinces than they have. Ouch.