Thoughts on L5R and anything else, from March 23-28, 2012 – which apparently includes an excessive emphasis on the Lion Clan.

1)      AEG needs to let people know what’s going on with Den of Iniquity.  And they need to make sure that it isn’t instantly legal and delivered in such a time and manner that whether you have it for a particular weekend depends on when your mail happens to show up.

2)      Maybe we should start a pool on what eras will be included in Imperial Histories 2.  Top of my list is the Return of the Unicorn.

3)      The notion of opening Helvaults at Avacyn Restored pre-releases is pretty cool.  Not that I’m going to be at one, but still.

4)      Continuing with my “reading Imperial Histories” commentary – is it just me, or are the Lion sometimes the dumb jock bullies of Rokugan?  They’re obsessed with football war.  They’ve always been part of the attractive/popular honorable/traditional in-crowd.  They have anger management issues.  They like to pick on smaller Clans.  And they think it’s un-Lion to be too scholarly – these are, after all, the people who thought that Akodo Toturi (generally considered one of the greatest leaders in the history of the Empire) was too bookish to be a proper Lion. 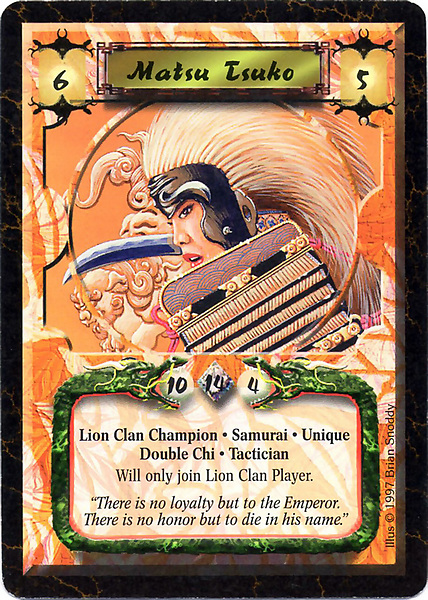 5)      And, on the subject of Lion who hated Toturi, did Matsu Tsuko do anything right?  Her tenure as Clan Champion seems to be characterized by letting her emotions get the better of her, making the Clan Wars worse by attacking anything that moved just because she could, and then completely failing as a leader when the chips were down and Fu Leng was walking and talking again.  The character gets written about as if she was heroic in some way, but it seems like her greatest accomplishment was killing herself so that Toturi could lead the Lion armies again.

6)      The Lion seem to be at their best when their Clan Champion is considered “un-Lion” (read: has interests other than getting in as many fights as possible) by the conservative/bloodthirsty wing of the Clan, so it’s probably a good sign for Akodo Dairuko that many of them don’t like her.

7)      I think my wife likes Colossal Arena better than I do.  That’s not a common occurrence with a designer game.

8)      Don’t forget that you can contribute to Strange Assembly too – you don’t need to have been on the podcast or live in Atlanta to write a strategy article.

9)      We finally got an Embers of War release date.  Looks like GenCon will be my first real EoW play (there are 10 EoW-legal Kotei, but none in my vicinity).

10)   Look’s like AEG’s hitting the euro-game market with its new Tempest setting.  This line has been kicking around for years, so it’s nice to see it finally making its way to market.