Seeds of Decay (SoD) is the latest (October 2012) expansion for the Legend of the Five Rings CCG. It is a standard L5R expansion, with 159 new cards (plus some tokens), and is sold in 11-card booster packs and 87-card starter decks (9 of the cards are available only in the three clan-specific starter decks). This review will look at Seeds of Decay for the more casual player – for a more in-depth analysis, check out the Strange Assembly podcast in the near future.

The ongoing story of Seeds of Decay continues to ramp up the tension in the Colonies. The Crab/Scorpion and the Lion intensify their attacks on the Spider, while the Spider continue to experiment with the Blood of the Preserver. This situation draws the Dragon into conflict with the Lion (who are killing Dragon samurai along with the Spider) and the Spider (because now the Dragon know the Spider are up to something), and the prominence of the Kitsuki may be annoying some of the other clans. The Crane and Mantis conflict has escalated to a full-blown war, with the Mantis having the upper hand for now. The Phoenix continue to meddle in order to gain their inquisitors access to secrets, while the Scorpion and faceless ninja continue their shadow struggle. All the while, Fudo-ism continues to coil its tendrils around the hearts of samurai in the Colonies. 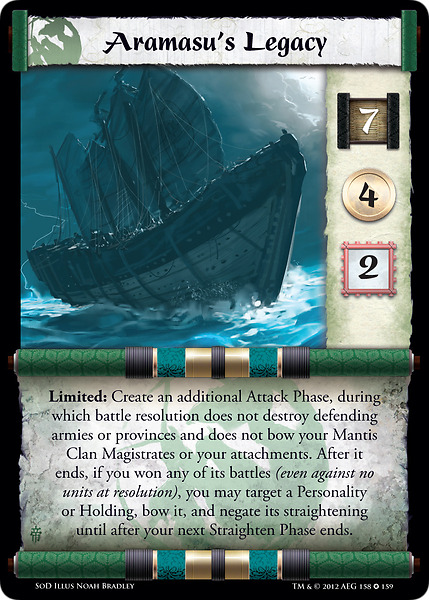 As usual for an L5R expansion, Seeds of Decay features three new Strongholds, one each for Mantis, Scorpion, and Dragon. The Mantis and Scorpion Strongholds are both efforts to revise failed designs from the past. The Mantis get Aramasu’s legacy, which harkens back to the abusive Raid mechanic. It lets you create an additional attack phase where Personalities don’t die or bow from battle resolution (but can still be shot in the face), and then locks down an enemy Personality if you win any battles during that attack. Since the Mantis have Naval, the choice you’re generally presenting the opponent is to risk losing a lot of guys to a split attack or to just let the one guy get locked down. 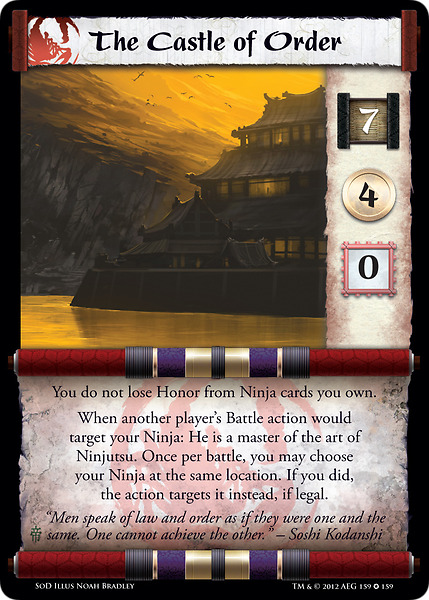 The Scorpion get The Castle of Order, which lets you once per battle redirect an enemy action from one of your ninja to another of your ninja (they were hoping to go back to a more direct revision of the old Ninjutsu mechanic, but ended up having to settle for some milder flavor of the enemy not knowing which of your guys was which). To go along with this they also get several cards that create 0/2 ninja spuds to be sacrificed to save their real guys. 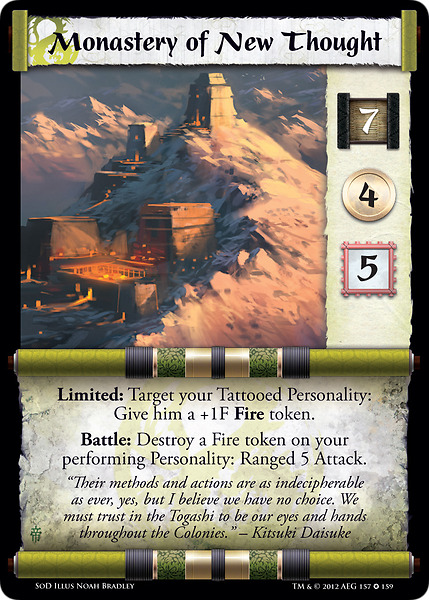 The last Stronghold is the Monastery of New Thought, a Fire token themed box for the Dragon Tattooed Monk theme. To help the monks use an array of existing cards that require Fire tokens, the Stronghold lets you put out one Fire token per turn. The Stronghold can also do Ranged 5 Attacks, but at the cost of destroying Fire Tokens. While Dragon Monk decks will likely be improved by being freed from the old “you have to play with awful Kiho” Stronghold, Monastery of New thought seems unlikely to provide the kick that this woeful theme needed. 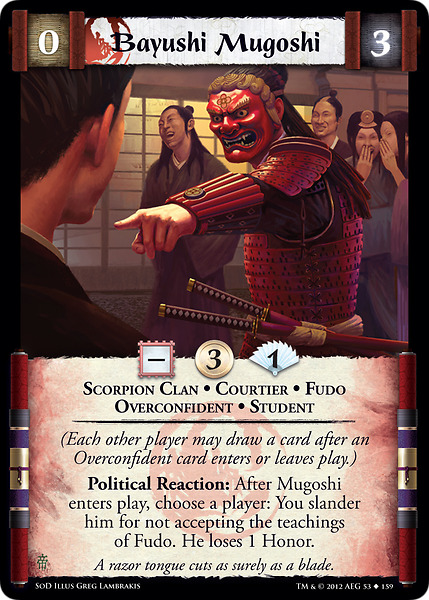 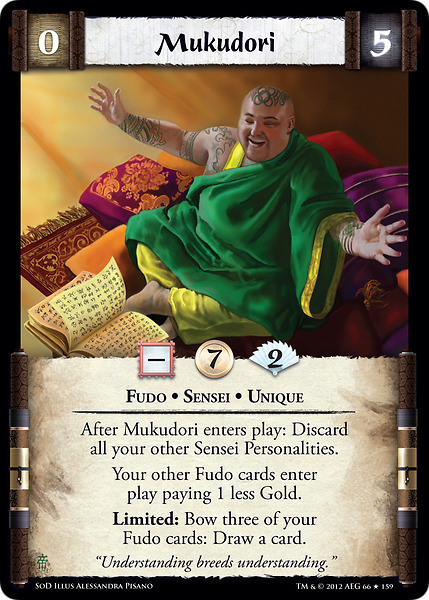 Additionally, although it isn’t a specific mechanic, there are a lot of cards in Seeds of Decay that are preemptive negation/redirection. Most of them are along the lines of playing a Strategy to target your own guy, and then the next time the opponent plays an action it is negated if it targets that guy, or it has to target that guy, or whatever. Other currents in the set include a number of Fudo cards, even more Sensei, and what seems like a higher number of unaligned human Personalities than usual. 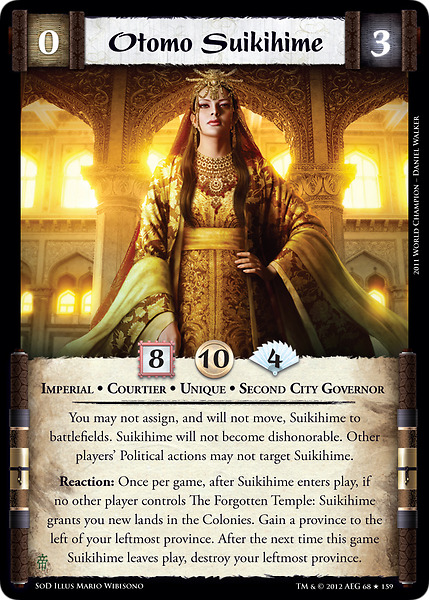 Other cards that have generated buzz are Naka Mahatsu (the new Master of the Elements), Small Library (a not-so-small 4-for-3 Holding that refills after you buy it), Incense Mill (repeat-use meta against Force penalties and effects that stop your Personality from performing actions), Wide Valley (a Terrain that negates all destruction), Otomo Suikihime (the Imperial Governor in the Colonies), and The Deciding Moment (the 10,000th L5R card and a pretty nasty catch-up effect for military decks). 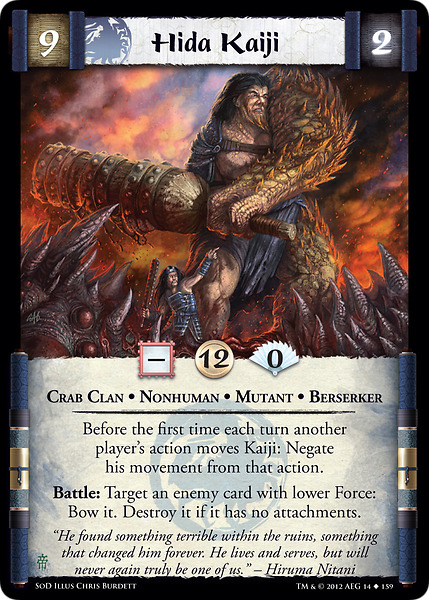 Crab have continued to perform very well on the tournament scene, with competitive options out of their Berserker, Yasuki, and Scout themes. All three picked up something from Seeds of Decay. Berserkers got a decent Personality (Hida Kaiji), the Scouts gets another couple of cards that abuse their free Followers (Requesting Reinforcements, Two Stings) plus a decent unique, and the Yasuki get the ridiculously good Yasuki Tsujiken. The short end of the stick seems to have gone to their worst-performing theme, the Kaiu. 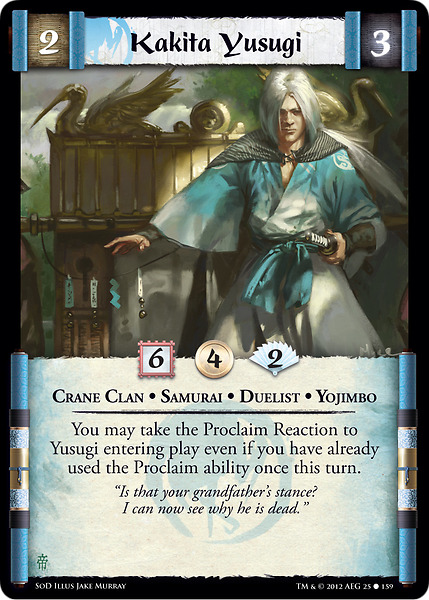 Crane, on the other hand, have consistently performed poorly in Emperor arc. Unfortunately, it’s hard to see Seeds of Decay changing that, as most of their themes don’t get anything impressive (although the new Asahina Daimyo and free guy are solid). The Crane’s best new material seems to hail from their Magistrate Duelist theme, which picked up a Naval Personality and a guy who lets you Proclaim twice in a turn. 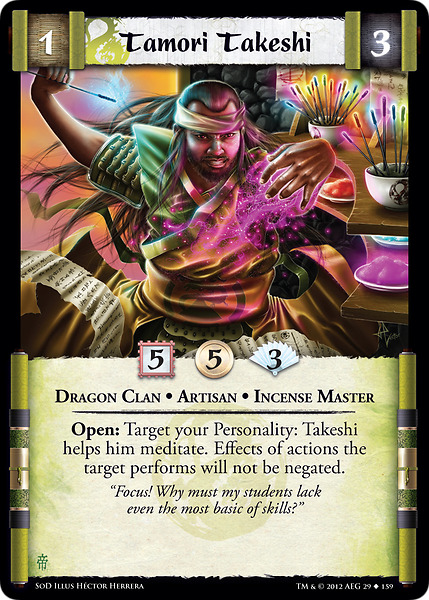 Dragon has been on something of a rollercoaster in Emperor arc, starting off with a bang as Kensai and Kitsuki decks were able to rack up a bunch of Kotei wins in the base Emperor environment, but dropping off after Embers of War released and cratering in the blitz-heavy The Shadow’s Embrace environment. With several errata now in effect, however, I noticed that a lot of Dragon got into the cut at Worlds this weekend – they all lost right away, and I don’t know yet what the decktypes were, but it’s a start. The most obviously good cards the Dragon grabbed in Seeds are their two Kensai, Mirumoto Michi and the stupendous Mirumoto Houken. The most talked-about card, however, is the non-thematic artisan Tamori Takeshi, who Dragon players hope will turn their Kensai uber-units into unstoppable wrecking balls. 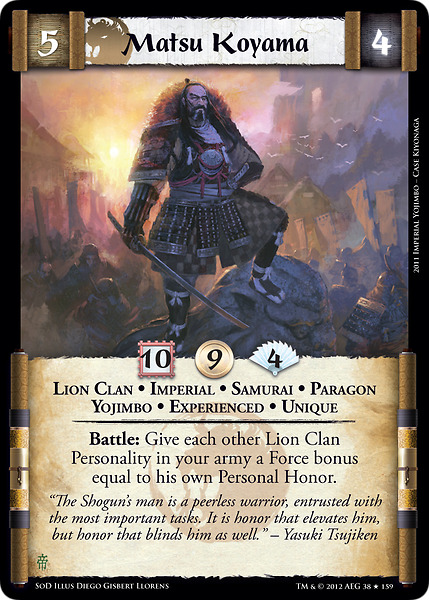 Like Crab, the Lion have had a ton of tournament success through Emperor arc, and with a lot of decks. Unlike the Crab, the Lion’s material in Seeds might not add much. The biggest new focus might be shifting the Lion honor decks back to Paragon/Ancestor mixes with new Paragon cards that focus more on gaining honor than on honor gains. An exception to this is probably the Lion’s most flashy new card, Matsu Koyama (advisor to the Shogun), who can generate a lot of Force for a reasonable price. 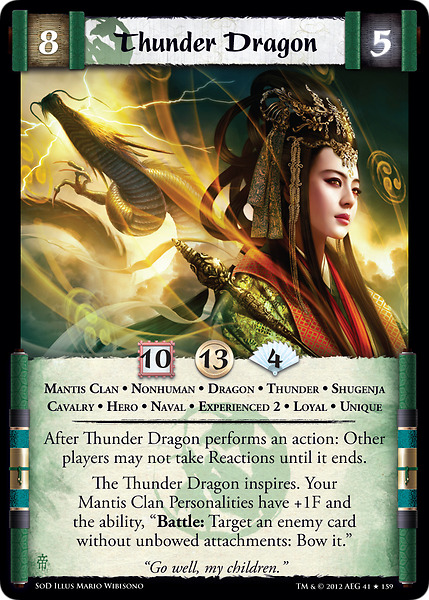 The Mantis have been in an odd spot this arc, with probably their best three decks being variations out of Kalani’s Landing, but that very scary Stronghold somehow not managing to convert to many wins. The economic warfare theme seems to continue to get the most love, although it is focused on the new Stronghold. Kalani’s Landing still picks up Black Marketeering and Dubious Resources, however, so it isn’t left entirely out in the cold. The Mantis Scouts, on the other hand, do seem to have been left out so long that they’ve frozen to death, as the already sad theme gets very little here. The most exciting Mantis card, however, is a clan-aligned version of the Thunder Dragon, who I’ll just let you take a look at: 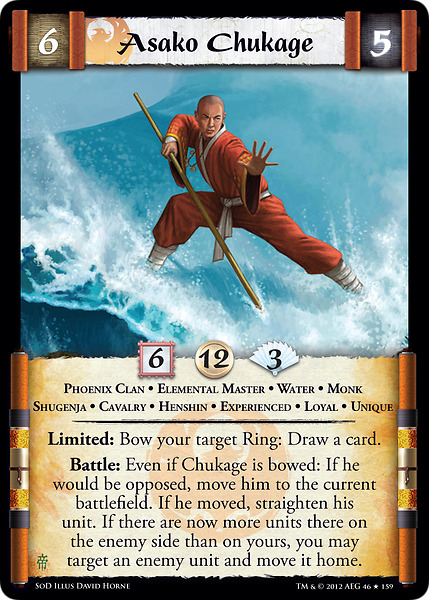 Phoenix started off a little slow in Emperor arc, but have now roared to life with blitz (or at least blitz-ish) spell military decks out of Library of Rebirth, or pretty much anything out of Temple of Purity. It’s a fun time to play Phoenix, as you can run a competitive deck with pretty much any win condition. The most presents in Seeds of Decay went to their Henshin theme (which can play as a nasty enlightenment deck out of Temple of Purity), which picked up three solid Personalities, including yet another version of the amazing Master of Water: 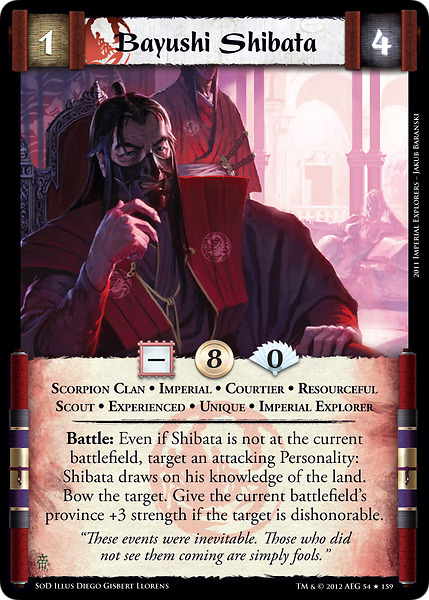 Scorpion finally got its groove back with The Shadow’s Embrace, with its biggest tournament success coming from passive dishonor decks out of Law of Darkness Dojo. That deck picks up Bayushi Shibata, a great unique, and standard Magistrate-focused decks out of LoDD can also use Ingenuity to further shore up their early-arc deficiency on the dishonoring front. The deepest pool of new decent cards falls to the Ninja, although that’s partially to make sure that their new Stronghold has enough spuds to work with. 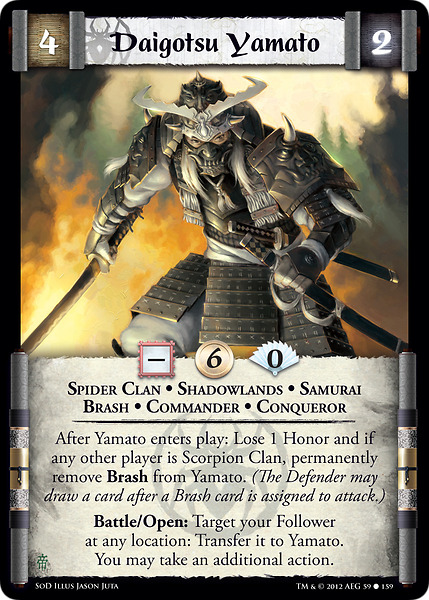 Spider has been the other poorly-performing clan in Emperor arc. Two of their themes (Commanders, Sohei) get basically nothing – but at least Daigotsu Yamato has awesome art! The Paragons get one amazing Personality (Daigotsu Yutaka) and another out-of-battle Dark Virtue to cycle with, but it’s hard to see that making a difference. Spider’s one bright spot has been the Goju box, which has done very well at putting people into the cut (although not at winning tournaments). The Ninja picked up the most options, with Goju Yurishi, Ninube Hajime, and Metsubishi all seeming to have potential. 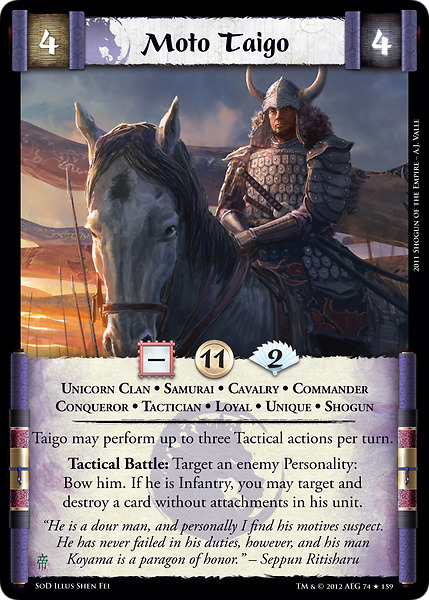 Finally, Unicorn have done reasonably well in Emperor being the clan that ignores those pesky theme suggestions (also some Death Priests in there). Leading the charge on that front will be another marquee Unicorn unique, the Shogun Moto Taigo. Don’t be fooled by the high gold cost/Force ratio; this kind of Unicorn Personality is always a beating. Another interesting, if pricey, prospect is Moto Miyu, who fills me with visions of Conquering super-units.

Promotional consideration was provided in the form of review material.