Embers of War is the latest expansion for the Legend of the Five Rings CCG. It contains 159 different new cards (plus six tokens), and is sold in 11-card booster packs and 87-card starter decks (9 of the cards are only found fixed in the starter decks). Embers pre-release tournaments are going on now, and the set become legal for tournament play on June 2, 2012. This review will look at Embers of War for the more casual player – a more in-depth analysis will be forthcoming on the Strange Assembly podcast.

Legend of the Five Rings is, of course, the interactive storyline CCG, so every new expansion brings not only new gameplay, but also cards affected by prior storyline tournament wins, and new information about the setting’s ongoing story. Embers of War has about a dozen credited cards, including Bayushi Tenzan, the card printed for the winner of one of the items made available by AEG in the Amber Blackburn BGG Charity Auction. 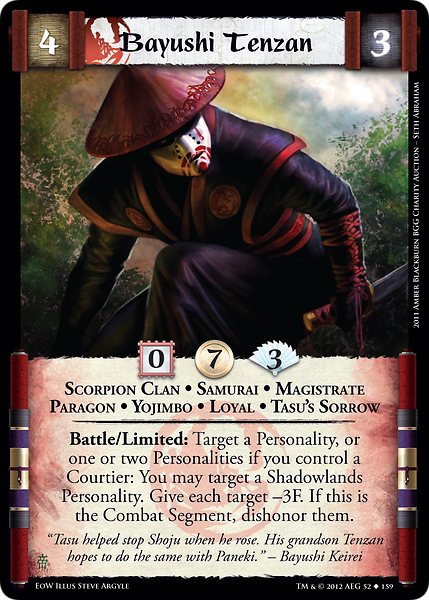 The ongoing story in Embers of War focuses on the activities of the Great Clans in the recently founded and the even-more-recently opened up to every Colonies (this mirrors the story of the Kotei season that is going on now). This includes a variety of references to the Spider and Mantis (who, along with the watchful eyes of the Dragon, had been assigned to deal with the Colonies up until this point) and how they really, really resent this turn of events. Other story points highlighted include the ongoing alliance between the Crab and Scorpion (who seem to be sharing a Dark Secret), new hostilities between the Phoenix and Lion, and attacks on the Unicorn’s overland route to the Colonies (possibly by Yodotai-affiliated bandits). 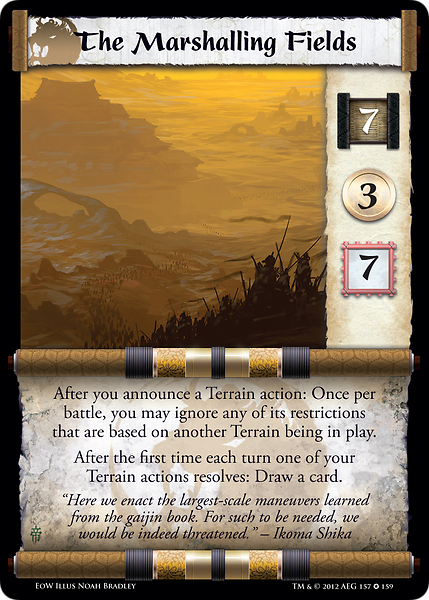 The most exciting place for a new L5R expansion is typically the three Strongholds. Embers of War brings new ones for Spider, Lion, and Unicorn. I am most excited about the new Lion Stronghold, The Marshaling Fields, which is another option for their Scout theme. Lion Scouts have a Terrain emphasis, and I wasn’t enthused about the original Emperor arc Lion Scout Stronghold (The Golden Plains) because by automatically creating a Terrain at your battles, it didn’t give you any reason to play with actual Terrain cards. The Marshaling Fields, on the other hand, makes you want to shove a bunch of them in your deck. 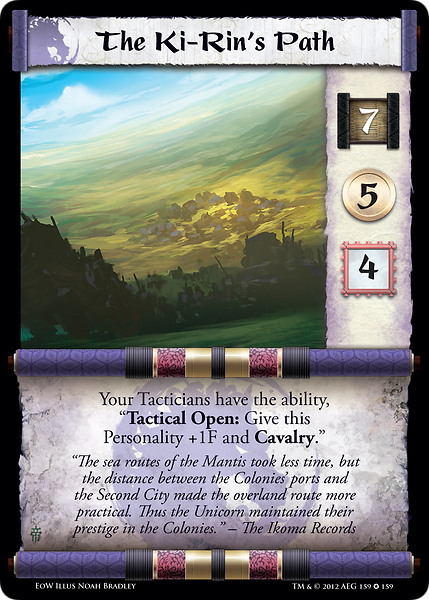 The Unicorn received The Ki-Rin’s Path (the name for the aforementioned overland route to the Colonies), which supports their Tactician theme. Unicorn Tacticians, unlike the rest of their themes, are a mix of Infantry and Cavalry Personalities. Ki-Rin’s Path let’s you go back to having an all Cavalry force when you want it, with some extra Force to boot. It may also enable Tactician “Superfriends” decks, playing lots of out-of-Clan Tacticians and turning them into Cavalry. Finally, the Spider’s Commanders theme received The Plain of Glass, which represents a new secret hideout in the Colonies. The original Spider Commander box (Keep of the Dead) incentivized loading one Personality up to take advantage of the Conqueror keyword and the Stronghold’s Battle ability. The Plain of Glass, on the other hand, pushes you towards spreading the Follower love a little bit by letting you Conquer with two different units each attack. The ability to attach Followers as a Battle action is also not to be underestimated. 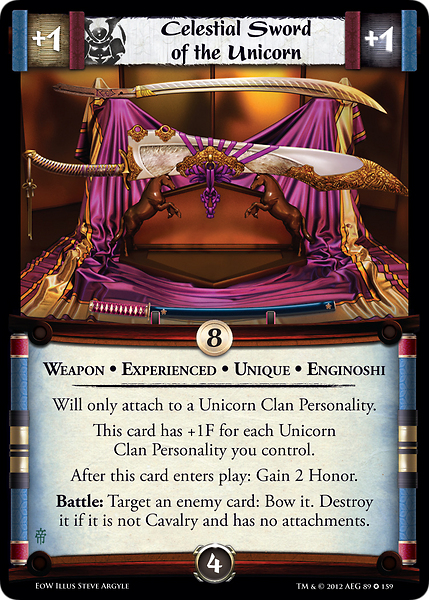 In addition to the Strongholds, each starter deck has the usual fixed Personality, and a new feature with Embers of War, a fixed item as well. For the Lion and Unicorn starters, these are Experienced versions of the Clans’ Celestial Swords, powerful artifacts that we haven’t seen cards of in quite some time. The Spider starter deck features an Experienced version of the Ancestral Sword of Hantei, the ancestral blade of the original Rokugani ruling dynasty. Embers of War features of a couple of cycles of Personalities of note. First are the Sensei, one for each Clan, whose mechanics provide global boosts for their player or for the Personalities around them (the Sensei are all uncommons). Second is the appearance of the first batch of the Seven Sohei, a collection of story-selected Monks with Clan tie-ins (the Sohei are rares, but they are Unique and shouldn’t be tough to get).

Additionally, Embers of War has stacks of Focus Effects, aimed to encouraging duels to involve more focusing, instead of just striking to get it over with. 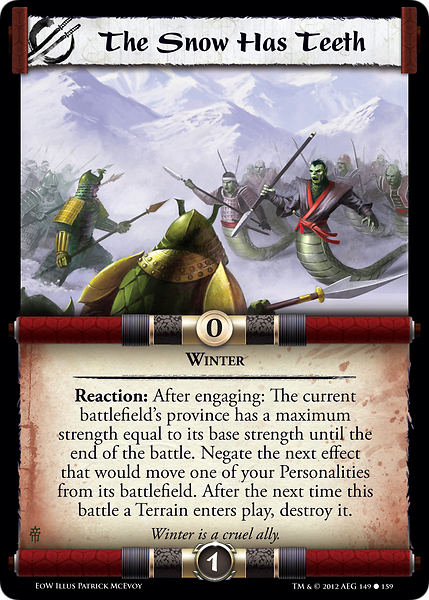 Other cards that have generated buzz are The Snow Has Teeth (meta against several different passive defense deck tactics), Inexorable (an anti-Reaction Reaction that is a weakened version of the old power card Fall On Your Knees), Low Market (a Region that generates Gold to pay for attachments), The Heir’s Wrath (an expensive but powerful Unique Strategy that lets you destroy a unit as a Limited action), and Games of Will (a meta effect that stops Force penalties and the popular Games of Sincerity). Inexorable is the only one of these that is a non-Unique rare. 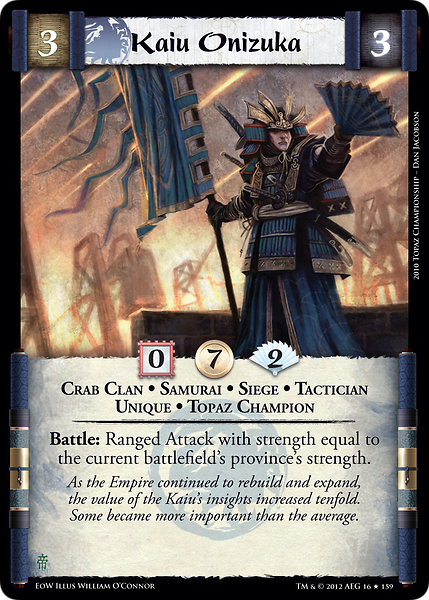 The Crab have had the strongest tournament performance so far in Emperor Edition, and pick up some nice support in Embers of War. Although their strongest theme (Scouts) comes up largely empty-handed, their second-best theme so far – Berserkers – brings home quite the haul. In addition to the obligatory Crab Clan Berserker Personality (Hida Bakishi), they also get Sakti, an Unaligned Berserker who will go in basically any Berserker deck. The Hida also receive Splintered Weapon, which has decent stats and the powerful ability to destroy any card without attachments. All of these Berserker cards are non-rare, although the excellent-for-Berserkers Strategy Power of Strength is rare. A fan favorite for Crab from Embers of War is likely to be Kaiu Onizuka, the newest Topaz Champion. 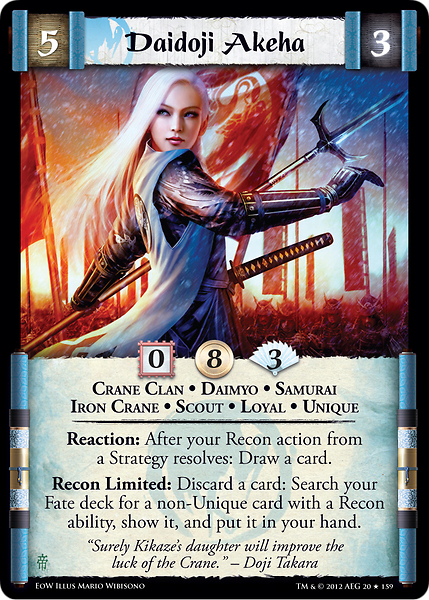 The Crane, on the other hand, have had poor tournament performance of late, and will be looking for a pick-me-up from Embers of War. It is, however, unclear whether they’ll get enough of one. The Crane’s best additions are probably to its Scout deck, which sees a couple of good new Personalities, including the Daidoji daimyo, Akeha (daughter of the very popular Daidoji Kikaze). Dragon is another Clan that has been riding high on the tourney scene, with two different high level decks in the Weapon-platform Kensai and honor-running with the sharp-eyed Kitsuki. The Kensai get another few great options, with the high-Force Mirumoto Kouzei and the versatile Strategy Moving and Unmoving, which can serve as send-home or move-in. Embers of War also has a couple of new Weapons, including the nice Sankaku-Yari and the decent Shamsir. Moving and Unmoving is the only Rare among these, which is most relevant with regards to the Weapons, as it has been tough to field a good set of Emperor-legal Weapons without a lot of rares and promos. The Kitsuki also have some decent additions, headlined by the Experienced version of Kitsuki Daisuke, who draws a card whenever he wins a duel (and also continues to have great flavor text). 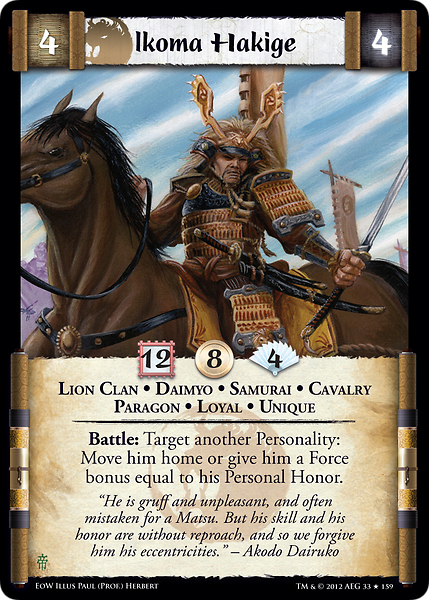 Lion have also been able to field two strong tournament decks, one with their Ancestor-focused honor theme and one an amalgam of their Paragon and Tactician themes (mostly a Paragon deck with a splash of Tacticians to activate the card draw on Eternal Victory Dojo). The Lion options in Embers of War are noteworthy for the Ikoma takeover of the set, as the relatively small (by Lion standards) family grabs four of their Personality slots in the expansion, including not only the expected Scouts but also a couple of Paragons (including the new Ikoma daimyo). 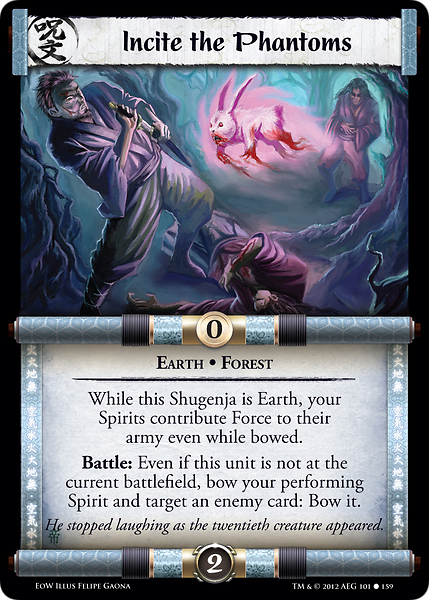 The Mantis’s greatest tournament success so far has come from using the Kalani’s Landing Stronghold to generate tons of cash, and this deck picked up a nice option in the extortionist Yoritomo Kanaye. Indeed, all of the Mantis themes picked up something or another, with the Tsuruchi Scouts grabbing the most Personalities (3). Movie geeks are sure to enjoy the Spell Incite the Phantoms, which includes a lethal rabbit-related shout-out to Monty Python. 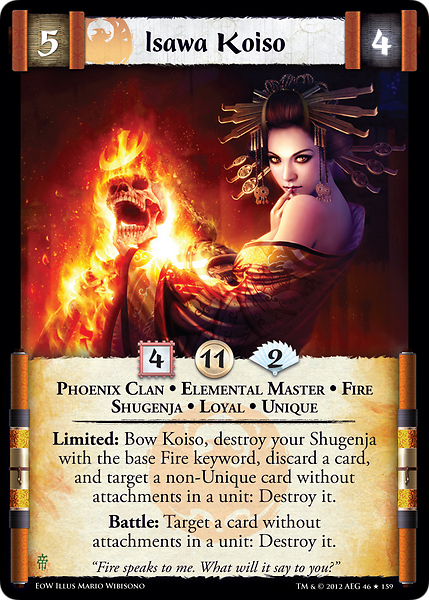 The Phoenix assortment in Embers of war is headlined by the new Master of Fire, Isawa Koiso, who is sexy in more ways than one. Another Fire Shugenja, Isawa Mina, should also help out their successful Library of Rebirth decks, as there are a lot of attachments in good military decks these days. The card draw of Broken Cipher won’t hurt either. The other themes get something too, as Inquisitor decks (well, the non-rocket ones, anyway) will be glad to add another honor-gaining ability in the form of Asako Megu, the Shiba get the nasty Yojimbo Assemble (another “destroy something without attachments” effects), and Henshin get the situational but hyper-powerful-when-it-works Riddle of Rebirth. Scorpion have spent Emperor Edition so far in the unusual (for recent years, anyway) of having the overwhelming majority of their tournament participation coming from military, rather than dishonor decks. This is likely to change with the release of the Embers of War pre-release promo, Den of Iniquity. But Scorpion dishonor also gets fodder from Embers itself, including the fantastic experienced version of Soshi Yoshihara. And, not to be left behind, the Scorpion military decks each pick up a (rare) Strategy that will provide a boost – Yojimbo Assemble for the Paragons and Help From The Shadows for Ninja. Bayushi Tenzan is pretty great too. Although not as poorly performing as the Crane, the Spider have also lagged in tournament performance, and most of their decks don’t look to get much of a pick-me-up. The headline Spider card is the new version of the Shadow Dragon, who is worth every penny of that 20 Gold Cost. Along with Help From The Shadows, he could assist the Goju Ninja deck have a little more success with actual Ninja. The Spider Sohei, arguably the best deck Spider has going, picks up the Kensai cards discussed earlier, plus a decent Personality in Sugihara. 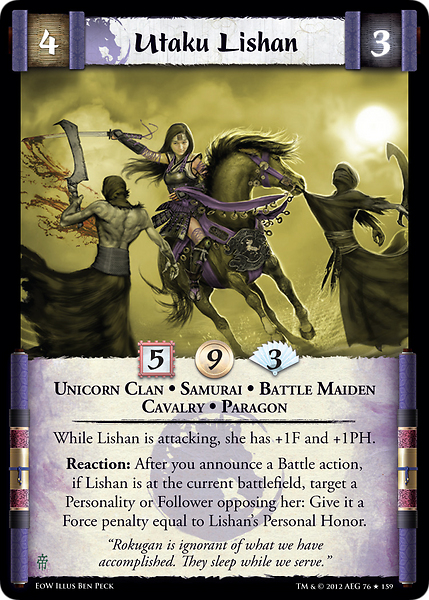 Finally, the Unicorn look to continue at a moderate pace, with their themes picking up some decent cards, but nothing explosive – unless they can rip multiple Two Fronts in time to make a last stand impossible for the opponent (Crane Scouts can aim for this too). Battle Maidens add Utaku Lishan (Reactions are much better tempo than Battle actions) and You Are Not Worthy to destroy almost any attachment. The Tacticians get another nice use-at-home Personality in Moto Isul, while the Commanders can use Flanking Unit for even more province sleazing. And Moto Rani could be a standout performer for the Priests of Death.

That’s it for this look at Embers of War – which I imagine will become the bonfires of war soon enough.

Promotional consideration was provided in the form of review material.