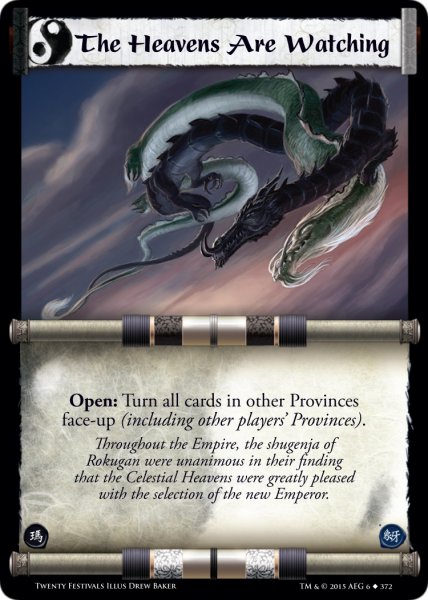 Twenty Festivals is something that Legend of the Five Rings hasn’t had in a while – a base set where there isn’t some big new change-up. There are some rules tweaks, but no major adjustments. The legality system remains the same – as planned, AEG has stayed with a larger set at the beginning of the year, which that set and the smaller expansions throughout the calendar year rotating as a block. So while I’ve greeted prior base sets with a “welcome to L5R” mentality, this time it’s just a normal set review. You can find my review of the last base set (Ivory Edition) here, and we recently did a new/prospective player episode on the podcast, if you want a fuller experience. Note that this review, while not being an introduction to L5R, is also not intended as an in-depth strategic guide, but rather a more casual look at the general themes of the set, a few splashy cards, and what’s going on in the story.

Out here in the real world, Twenty Festivals is named as such because Legend of the Five Rings will celebrate its 20th anniversary this year (and if I’m not mistaken, 20F reprints at least one card from every older L5R expansion). In the setting, Twenty Festivals refers to a series of festivals being held to celebrate the naming of a new Heir Apparent and his ascension to the throne. The story in Twenty Festivals feels like it’s more about this moment in time than other things going on. We know

that darkness is coming, that the Scorpion and Lion will be continuing their war, that the Spider Champion is really ticked off, and so forth, but these are on pause for a moment while the Empire basks in a little calm before the storm.

Because Twenty Festivals is a base set, it includes Strongholds, but many of them are identical to, or slight adjustments to, the Ivory Edition Strongholds. Unicorn loses its first-turn economy boost, Crane’s honor gain is now just a bow for 2 honor, Spider gets power-up tweaks, Phoenix gets a do-over on their lousy old box, and Crab trades its weenie-favoring Force boost for a fatty-favoring straighten action.

Also because this is a base set, each Clan gets new themes in a more formal sense than usual. In addition to the ‘core’ theme exemplified by the Stronghold, each Clan will get two Clan-specific Sensei over the course of the year – one in Twenty Festivals, and one in the second small expansion. As you’ll notice, there are a number of similar themes between Clans, which is designed to help better support drafting.

In addition to the Clan-specific themes, there are Sensei to support several multi-clan themes. Dijuro Sensei (Crane/Dragon/Phoenix/Scorpion) promotes the use of Fortifications with provinces strength boosts. Taitaken Sensei (Crab/Lion/Mantis/Spider/Unicorn) turns your Followers or Weapons into Ranged and Melee Attacks. Kiyoteru Sensei (All Clans) is for an Elemental Dragon – oh, and did I mention that there are new versions of the Elemental Dragons here? And Mahatsu Sensei makes a return appearance for enlightenment decks.

Is there anything negative to say? There are an excess of typesetting and clerical errors in this set. Mostly notably, all of the Clan Champion reprints have their keyword lines messed up, and the Ring reprints don’t have the right legality bugs. Are these things the end of the world? No. But there’s really no excuse for this sort of sloppiness.

Overall, Twenty Festivals looks to be a great set, bring L5R into what I’ve (just this very second) decided to call the contemporary era (I’ve already dubbed the period starting with Samurai Edition the modern era). We won’t know exactly how the Clan balance will turn out until we’re deeper into the competitive season, but 20F moves us past the holdover overpowered cards from the end of the modern era, and that can’t be a bad thing.