The newest expansion for the Legend of the Five Rings CCG sees a limited release today, with full release and tournament legality later in July 2015 (although it feels like it’s been out for a while, since the expansion was included as prize support in the latter portion of the 2015 Spring Kotei season). Let me invoke my standard note for written set review: this is an overview of the set aimed at a more casual player. It aims to provide an overview of mechanical and story aspects of the set. It is not intended as a detailed card-by-card analysis for tournament play.

Thunderous Acclaim is a standard L5R expansion, released on a booster-only format, with 36 boosters per box and 16 cards per pack (15 normal cards and one premium card that might be a token, send-in card, koku, or draft rules). I’m sure there’s some sort of MSRP on the packs, but does anyone really pay that for CCGs?

An Ending, and Two Beginnings, But One of Them Overshadows the Rest 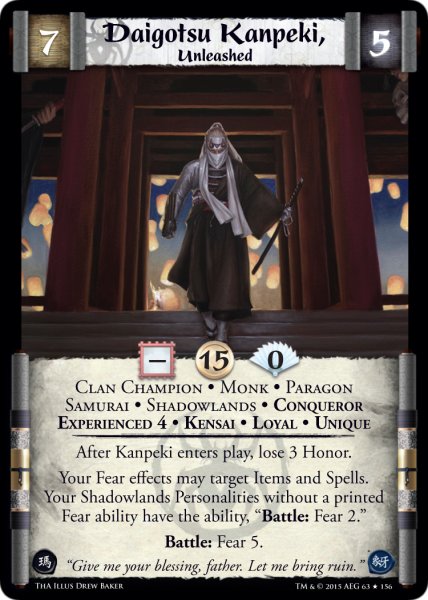 The titular thunderous acclaim of the expansion is the acclaim for the new Emperor of Rokugan, Iweko Seiken. This brings a close to the body of the Brother’s Destiny storyline and, presumably, an end of some sort for Iweko I. It brings about the beginning of a new Emperor’s reign. But probably more importantly it heralds the Empire’s descent into Jigoku, as Daigotsu Kanpeki embraces the power of the Shadowlands and seeks to overthrow the new Emperor. Many cards in Thunderous Acclaim (including, of course, Kanpeki Unleashed) will play up the Spider’s coming revolt (they seem to spend some of this time frame hiding before unleashing themselves) and the enmity many in Rokugan hold for them. 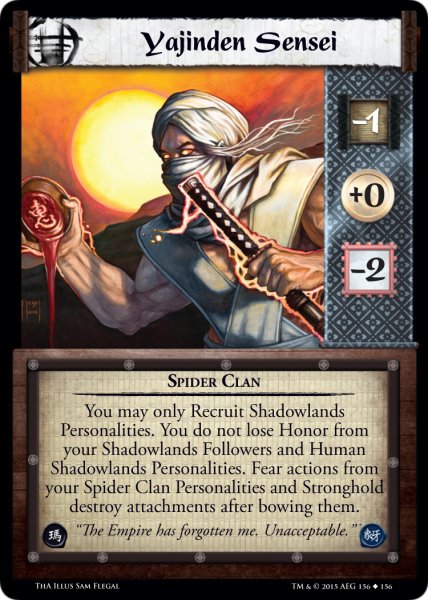 As Jigoku marches, prophecies of doom abound in Rokugan, and those prophets are represented by Hira Sensei (the blind Asahina Hira used to be the Keeper of the Void), usable by the Crane, Mantis, and Phoenix Clans (the three Clans who have potent prophets at this point). Hira Sensei allows a player to make heavier use of Events. The Spider receive Yajinden Sensei (Yajinden is a high-level Shadowlands bad guy who has been in the background for a while now), which enhances the Fear abilities of your Spider Clan Personalities, but restricts your Personality options to those who bear the Shadowlands keyword. Everyone else gains access to Ichigo Sensei, which gives an honor every time you destroy an enemy card during battle (Seppun Ichigo is an Imperial Commander, and this Sensei presumably represents the Imperial forces sent out to not-exactly-defeat the Spider).

The latest in the line of Bushido keywords (random prediction: Onyx Edition will feature a rollout of Shourido keywords), Compassion shares a little bit with Courtesy (which continues to appear here). Courtesy gave boosts for a player who started the game second, and basically served as a balancing mechanic for going second. Compassion gives boosts for a player who has fewer provinces than his or her opponent. A catch-up mechanic of sorts against other military decks, Compassion will also benefit Clans that go second more, as they are more likely to lose the first province to military decks (of course, any honor or dishonor deck will be able to reliably gain its Compassion boosts against a military deck). 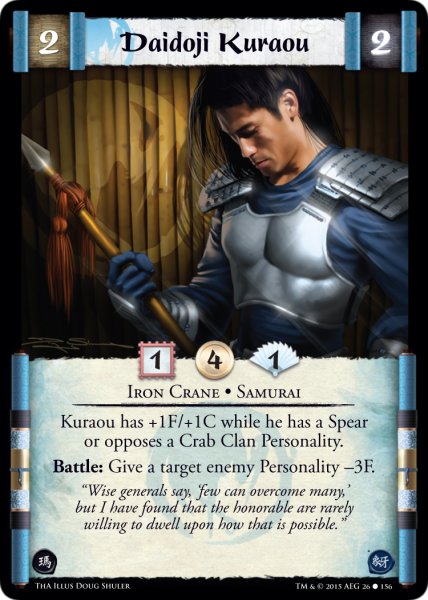 … have started coming into their own, with multiple Personalities bearing boosts for carrying Spears, Swords, or other specific Weapon types.

L5R expansions have ‘holding themes’ these days, and Thunderous Acclaim is no exception. The two themes here are Farms and Barracks. As they traditionally have, Farms mostly eschew extra abilities in favor of efficient Gold Production and synergy with each other. The Farms in Thunderous Acclaim are designed to work well with a Hikahime Sensei deck. The Barracks Holdings work with Followers and, to a lesser extent, Commanders.

The Lion mount their expected spring offensive against the Scorpion, and the conflict between these two Clans consumes most of their attention. This does not go as well as the Lion had hoped, however, after Scorpion treachery results in a breach in the walls around the Second Pit, with the escaping Oni attacking the Lion army. The Crab and Scorpion continue friendly relations, although it is unknown how the Crab will respond to Lion allegations that the breach was ordered by the Scorpion Clan Champion. 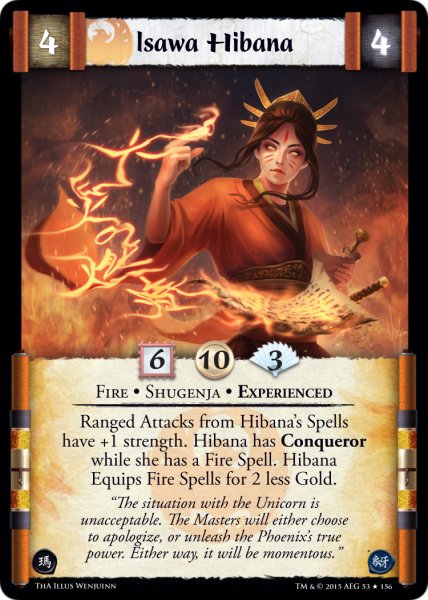 The Unicorn and the Phoenix continue their bloody struggle, which arose out of the Phoenix’s (accurate) claims that there were lingering problems caused by the now-defeated Moto Curse, assertions to which the Unicorn took rather a large amount of umbrage. The war had, until recently, largely consisted of the Unicorn ROFLcoptering the Phoenix, but the Fire Chickens seem to have turned things around.

The relationship between the Dragon and the Unicorn appears to be thawing a bit after the breakup of their respective Clan Champions’ engagement several years ago.

Ashigaru Farmland – With Equip an Open action, and a reasonable number of Strategies that cost Gold, having Gold available on the opponent’s turn can be pretty handy. A 3-for-3 Holding that straightens every turn (even with a gold production penalty on other player’s turns) is quite good, and this could be a strong contender for very low honor Clans. 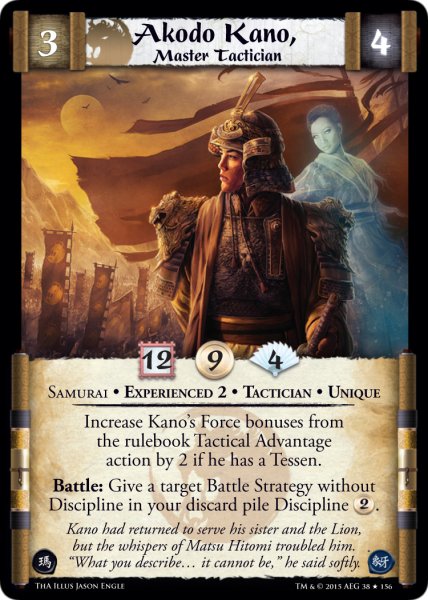 Akodo Kano, Master Tactician – The Lion Clan Champion’s older brother (who abdicated in her favor) returns, although his cool-headed strategic ways do not seem to be winning the day in the Lion Clan. Kano (who is, of course, a Tactician) grants Discipline to a card in the discard pile, giving a Lion player an extra dollop of toolbox power.

Chuda Teraiko – Nothing noteworthy in a vacuum, but Teraiko represents the return of the previously-dismissed Chuda family to the Spider Clan.

Battlefield Challenge – Players are always on the lookout for a possible new impact duel. While bowing an enemy Personality is not super-exciting as a battle duel, Battlefield Challenge gives a solid effect with an honor gain, which might help buttress defensive honor dueling decks.