James finished in Second Place (and, because Mantis won, Top Phoenix) at this year’s Legend of the Five Rings World Championships at GenCon 2015. Below you can find his decklist and tournament report. This is our third GenCon L5R World Champs report – if you haven’t already, check out the first (by Brendan Quigley) and the second (by Jim Chin). Have a story to tell from this year’s World Champs (or another storyline tournament)? Go ahead and submit it! 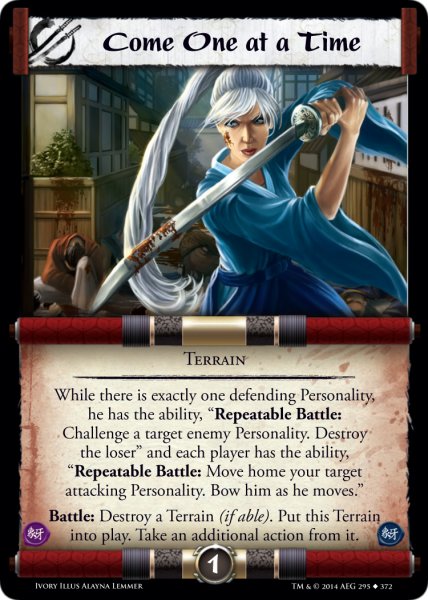 So, second place at worlds. I predicted to meta almost perfect right up to the finals. I thought Mantis was going to have issues making it in, it goes to show Isaac Cynova was on point with his deck and deserved to make it. i guess there was a little lead in to getting things set for Gencon. Things have been sort of chaotic cauldron lately. I’ve recently found out I’m allergic to caffeine, which also means chocolate. got promoted at work with a new schedule and a ton of new duties. and then extracurricular activities have been . . . messy. i was at a place where i needed a vacation.

I drove up with John Andrew, David Arnold, Jonny Talala Hinkle and Jeff Phillips right after work on Wednesday night. We got into Indianapolis about 6:00 am and got our badges and such. From there John and I made it to the front of the line for the dealer room and I got my copies of Siege: Clan War so i could play Temple of Destiny in the main event deck. i went 2-2 in the invitational after, then went back to the hotel room to crash.

Thursday night i went to the spider dinner and saw all the people: LeAnn LaFollette Steven LaFollette Case Lopez C Thomas Hand Sparks Duh Paul Ashman (is he on the phazebooks yet?) Trevor Nerpel and tons of other folks, it was great. I ordered too much chicken which was great, because later that night i needed something to eat. It was Ryan Rockett‘s birthday and you all know how such affairs go. 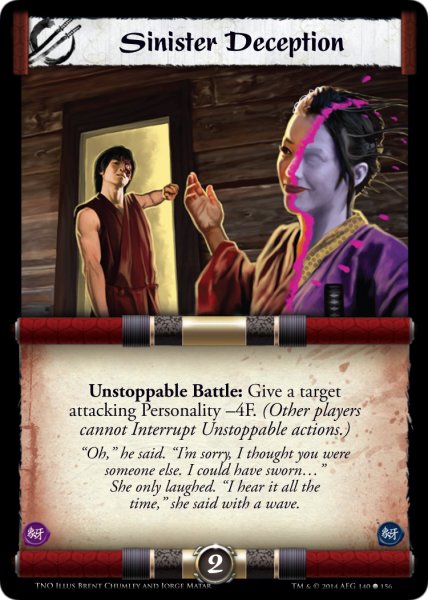 I spent friday catching up on sleep, micro adjusting for the meta (I think I went 2 &2 on Treachery and Deceit and Sinister Deception at this point). I flopped no cardboard, pushed 0 toy soldiers, rolled no dice and made not a single amendment to a character sheet that day. It was bliss. I hung out with the family that day, you’ve all seen the photos. Friday night i went to the smaller l5r floor at the Hilton, John Ling is still a great bartender, David Lapp‘s homebrewed beer with chipotle peppers was amazing. I made it home at a reasonable time to flop cards early on a Saturday.

The Majestic Temple of the Phoenix 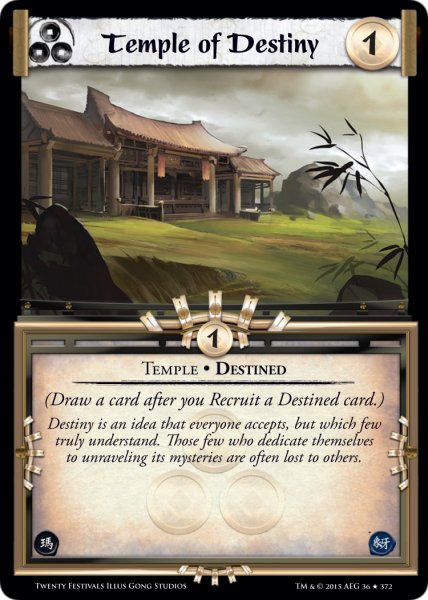 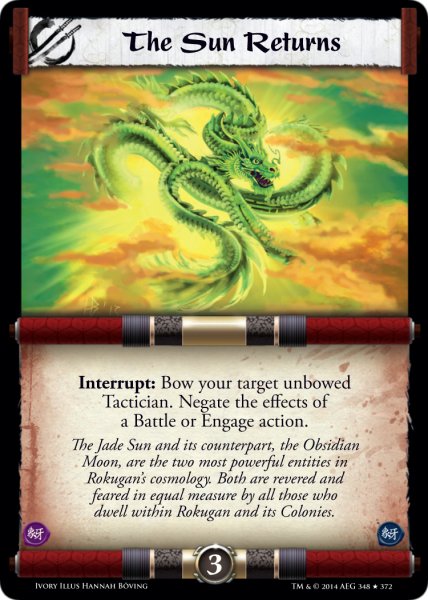 Super worried about this pony match over all other pony matches. Word on the street is that Seals is a pretty good player, he even has his name on like 5 different pieces of cardboard or something. I know I have to risk the early defense and Come One at a Time (COAAT, I’ll be bringing this thing up A LOT) and pray to the gods of cardboard that he wont have Sun Returns to end the game. It payed off. I got a great start, he didn’t get The Sun Returns, and I think I crossed in six turns.

Round 2: Jesse Anderson, bane on my house, destroyer of too many kotei win-loss records, and all around great guy. phx honor

So. I have this horrible record vs. Mr. Anderson. I think we went 4 koteis in one season where we played first round every tourney. I had never beat him in like the 15 games we had played until KC Bride of the Emperor last month. He then proceeded to wreck my face in the top 8 at that event. This game came down to Jesse getting a terrible gold draw while i got almost all of the gold i could want without missing any Proclaims. I crossed just under the gun still. His build is good, but the bad gold start is a harsh mistress. 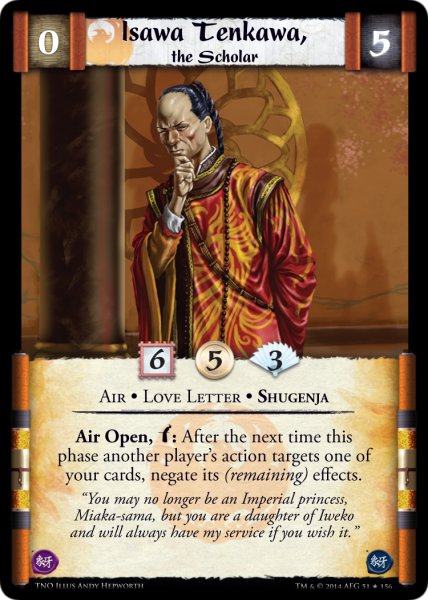 Great guy, met him in Richmond this year. He beat me bad there. Real bad. This game came down to me putting on the big boy pants, challenging a 2 chi, 20~ gold unit with all-ten-kawas (the 5 chi guy that has 5 chi) in the COOAT. he focused off top. There was an immediate hint of regret when he saw the card. I had to go for it. I said strike. We tied at 5, He didn’t get a Dynasty phase. His next card was Spirited Dispute which would have won him the game. I was set at that point and ran hard to 40 with 3 left standing and my opponent a few force shy of being able to get me.

Lunch break with Ben NCrystal Matthews we went to a hotel restaurant, I had a salad and a bloody mary (also, whiskey all day at the tourney, it keeps me from second guessing plays and losing games) then rushed back to the shindig 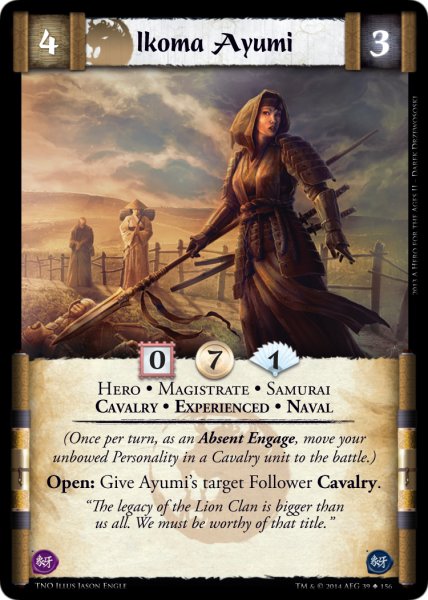 So, this match is as terrifying as it sounds. Lions on horses on boats. Thank all the gods, old and new, I had the early COAAT, and all 3 Banishes to get the other two. I think I had a 6 turn cross here again.

Bob made a mistake, and then I followed with two more COAATs. I’m not sure I get the match otherwise.

Now that I’m in the four folks at 5-0 (Jon Palmer and a couple of others) reach the gentlemen’s agreement that we double draw out and relax a bit.

I go second. I get the party started like a rock star. turn 1 Rhetorician & Genma. Turn 2 Banish to Seeking the Way and more gold. I run fast, I break up his hand on a Sanctioned that I lost and he has to go military. I cross in 6 turns have 2 provinces left with 14 and 7 PS and he has 16F in dudes. 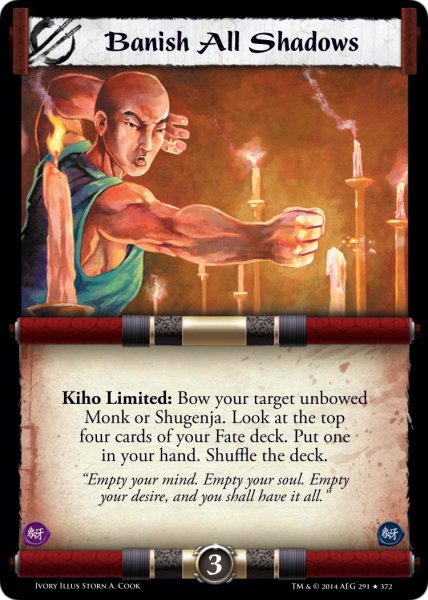 That’s where we cut on Saturday. I got handed the wrong thing at the reporting table, the fufu box when i bought the 20 year party ticket. Amanda Seals got me in to the thing though. She’s awesome if you guys haven’t heard. I got too many drink tickets, I had maybe one too many, and then I went to the hotel and crashed instead of bar crawling.

I still feel a little bad on this one. Like the lion game in round 4 I got all three COAATs off of Banish. But I did it both games. Two six turn crosses and skating by with a little more province strength than force on the other side of the table. Then I get one of two matches I was not ready to play.

Holy jeez his deck is good. Like really good. Like I’m not sure I can COAAT good. As y’all can tell by this report, it was my thing against military. He had better focus pools and more spinning his deck with In Stillness Forge the Soul and Stockpiled Weapons. He played brilliantly, rushed to Higaru and started Ring of Earth, the hard counter to my other method: send home. Game one I see the only way I might sneak out is to once again put on my big boy pants and make a huge play. Put Tsukimi in front of Higaru with one weapon, we focus out and tie, I save the 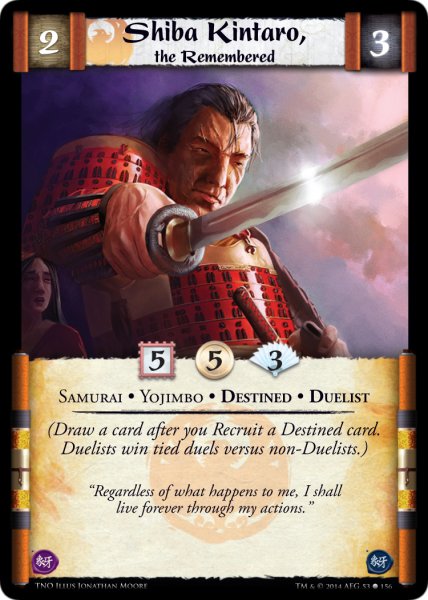 province and go to the next fight able to send enough home to save a second. The game came to the next fight where i had a Ward of Air at home to save a Josh Davis (Kintaro) and tie a fight at 0. All this through New Order early. Game 2 New Order again, i stall at 48 and he wrecks me something fierce. Game 3 I get a nutty fast start and I get to use Lookout Post to skeet up a little bit of honor with Seeking cheese. He gets really solid attacks and I have to make a big boy play again. This time I get no wiggle room, Higaru has two weapons so I go in tied with Tsukimi/COAAT. Epic 4 focus duel both of us go 2 off the top, all 4’s all around. I end the battle with 3 provs 8,8,& 6 p.s. and he’s 2 force short of being able to get all 3.

Holy cow guys, I made it to the finals at worlds.

The rest is pretty much history, watch the video for the play-by-play. Chris Medico and Eoin Burke are spot on with the calls. It kinda sucked to have the almost auto loss in finals, but I had a great time.

Additional thanks to David Winner, David Campos, Austin Richison for cheering me on and telling me not to get nervous, because I suck when I’m nervous. Thanks to Daniel Dineen, John, Reginald Garth, Nicolas Bongiu for running a good show, you guys are great. Thanks to Jenny Langley for making sure I had just the right amount of whiskey to do it on Saturday. It was a great day and I had soooo much fun and I’m looking forward to next year already.