We’ve got more than just the Top 4! Jacob, who finished in the Top 8 at the Legend of the Five Rings CCG World Championships at GenCon 2015, joins Brendan Quigley in providing us with a report of the goings-on this year. Have a story to tell from this year’s World Champs (or another storyline tournament)? Go ahead and submit it! 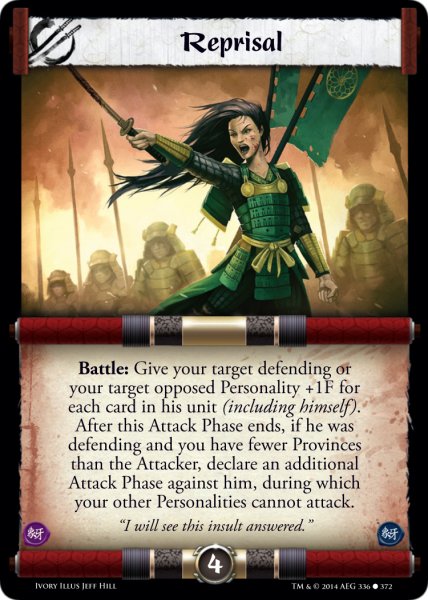 I haven’t played a lot of L5R with actual opponents this year, due to a lack of a local playgroup.
So I’ve been tweaking the same deck since the Ivory Strict Knoxville Kotei back in March, replacing the weakest performing parts after each event. I prefer to run more universal meta, cards like Spirited Dispute or Reprisal that are always useful and never dead.

The dominant decks during the Kotei season were:
– Standing Fast Military – either out of Aranai, Taitaken or Sachina
– Phoenix Rocket – with or without Hira
– Shika Mantis

I have a decent match against most Standing Fast decks. I play pure with lots of 4HR so I don’t run a sensei. That gives me the tempo advantage vs sensei Unicorn. Reprisal helps vs Sachina Crane and let’s me keep my foot on the pedal in the military matches I go first in, if my opponent tries to swing for two to pull ahead. I’m a little vulnerable to big follower Standing Fast decks, usually the best strategy is to make sure my opponent can only hit my biggest unit. I run lots of straighten to further counter it. Shika is a really solid match. 7 Force is easy to hit. I can usually overpower them with a full hand thanks to Destined and Spirited Dispute. Phoenix Honor is the worst matchup I have. It’s 50-50 vs decks that don’t run 5C and Come One At A Time. It’s worse in that match up (see below). 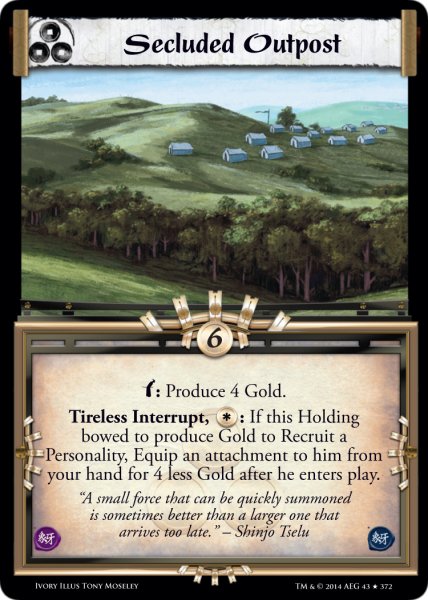 The deck has one “Secret Weapon” – comboing Secluded Outpost with Reserve and Destined. Eating most of an opponent’s actions before Reserving in Sakiko for 5 or 7 Force and 2-3 cards is a hammer blow.

The Endless Plains of the Unicorn
No Sensei 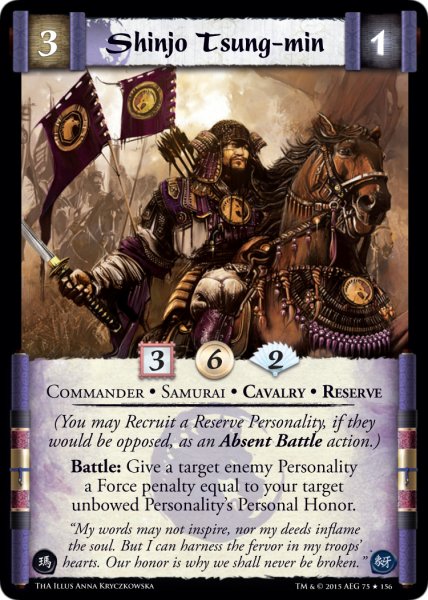 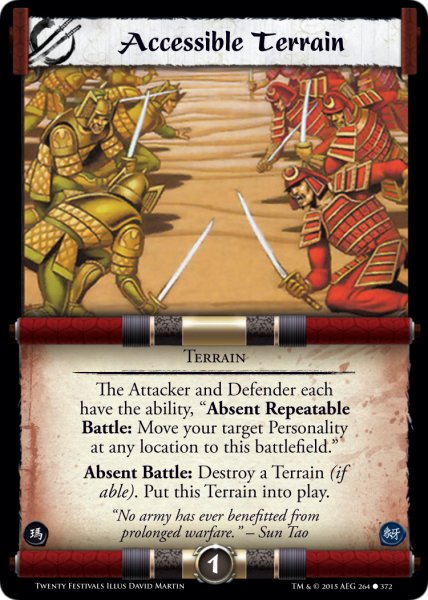 Ring of Earth
Ring of Water
Ring of Air

We see each other and both crack up laughing. Neither of us have played since Richmond so the pairing seems pretty fitting. I get Temple of the Heavely Crab and Temple of Destiny Turn 1, leaving Ivory Courtroom for his turn and an Outpost for turn 2. Flip a Stables, a Famous Bazaar and it turns into another Courtroom. Favor Cycle a Utaku’s Destiny. Between my and his Turn i get all 4 Holdings. Turn 3 I get Zhi-Tae with Utaku Destiny, another Outpost, a Coastal Lane & another ToD. Attach Aranai’s Armor on his turn. Turn 4 I swing, buying Sakiko with both Outposts and attaching Aranai’s Armor and Utaku Destiny. I also buy another ToHC, Chiwa, and more gold. He plays Your True Nature on Sakiko’s armor. I have Spirited Dispute in hand to recur both. He swings. He straightens to defend my next attack so I attach a Legion of the Khan & come in with both. I lure out his The Sun Returns and make him empty his hand before Reserving in (using Double Outposts) Tsung-Min and attaching Ensorcelled  Longsowrd and Aranai’s. He concedes as I’m wiping his board with 4 cards left. 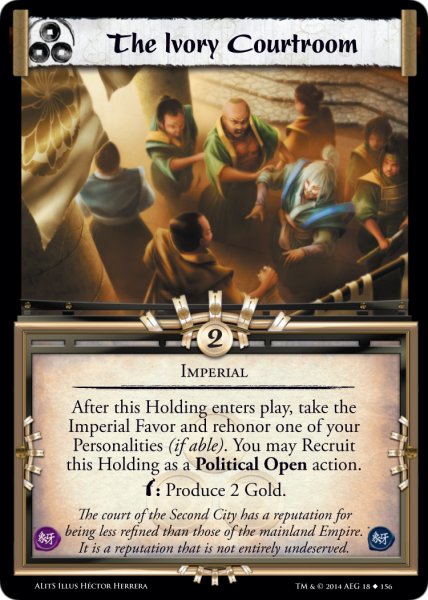 I’m forced to only get Legacy turn 1 and only Outpost and a Courtroom Turn 2. I mainly remember him having 3 Block Supply Lines, 3 Imperial Summons and 3 Encircled Terrains. (As well as the Love Letter Open bow dude.) A lot of me swinging with 1 Dude and trying desperately to maintain presence. He saw my Accessible Terrain with a Way of the Scorpion and named it the rest of the game. He saved his last province by 2 Strength (13 PS to a 12 Force Taigo Unit); a reprisal would have been enough.

My Gold start is solid, but I see most of my dishonor meta early. I’m forced to play a little slowly. I swing at one on turn 5 & 6 before finally splitting turn 7. He defends 1 and I Cav away and take the other. Then I reserve in Sakiko. I’m able to eat his hand to the point I know he can’t bomb me before I move in my dishonored dudes. 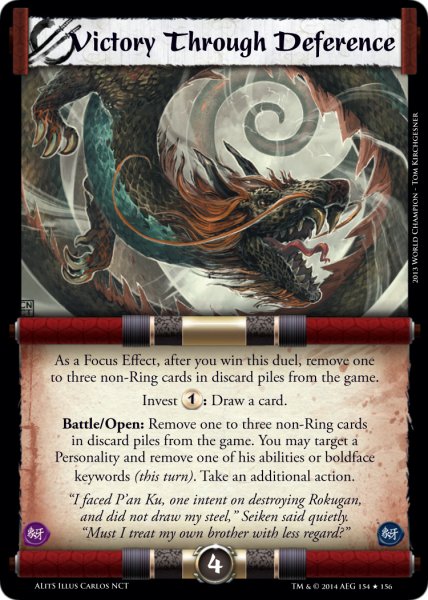 Round 4 – Can’t remember the guy’s name, but Lion Dueling

This is a match I shouldn’t lose. Most of his Duelists start at 3 Chi. Victory Through Deference combined with all my weapons keeps him from dueling me until the final battle, then he only gets 1.

We just got back from lunch so we have some time to talk. I mention that he’s the first non-sensei Lion Deck I’ve played all season, and laughs and says he’d rather keep his Province Strength. He’s playing a very quick deck that allows for little in the way of play mistakes. The crucial point in the match is when he manages to repel an attack as I split for two. I have Yao-Tsus with Ensorcelled and Aranai’s and flipped only gold. He splits for two on his next turn and I Accessible, he pops it and I try again. He has to abandon 1 province to outforce the Yao-Tsu twins and take this province. He forgets that Aranai’s gives resilient and I let him go back and VtD it off of one. I still have enough attachments in hand to take his last with the Survivor. 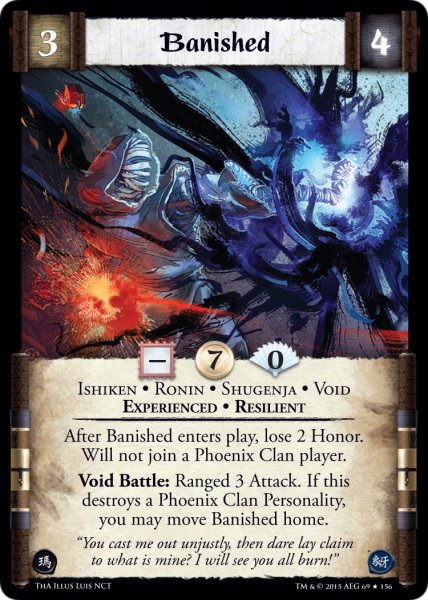 I remember very little of this game. I spent most of it trying not to lose to a Banished Exp with a fully loaded Guidance in War, Stones of Purity (6F worth) and a Weapon of some sort. I eventually get a VtD and remove Conqueror and he has to use Air to defend. I double down with Versatile Army to get rid of the attachments after negating its retreat twice. After I reload my hand the game is just barely going my way when time is called. I have the favor and enough defenders that he won’t be able to take my last 2 if I defend all in. (2 strong units and 3 weenies.) I swing for both and Cav dodge from his bigger defender. He has 1 action left when time is called. I offer to show my hand to make a decision but he doesn’t want to. We roll off despite me thinking I have it. (Granted without seeing your opponent’s hand there is no way of knowing.) I win the roll. Then we finish the battle. He Sudden Movements in one of his large units. (13 Force) I box in one guy I was holding back and drop Reprisal to maintain enough force to maintain a lock on the province. The dice chose the correct result.

A draw gets us both in the top 16. handshake 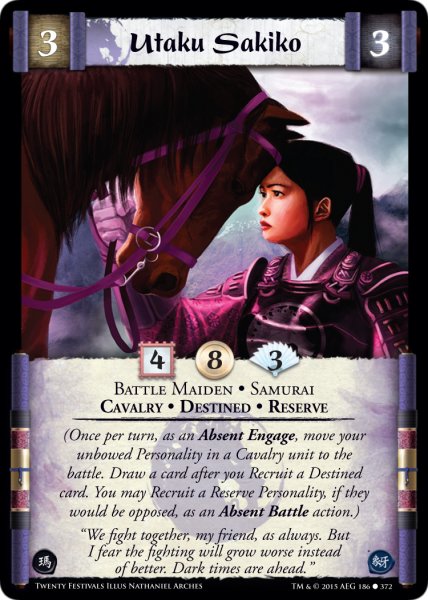 Going first is huge. I get early momentum. And I manage to maintain it by VTDing Conqueror off of his Taigo. I stay away from him as best I can until I have to go into him. When the time comes I split with a 7 Force Sakiko and a 5 Force Chiwa at one province and Zhi-Tae with Legion, Unicorn Armor and Ensorcelled. I thought he defended with Moto Bataar against 1 and Taigo at the other. I came over to fight Taigo. He pops my Legion, then pops my Sakiko, I Versatile Taigo. He says he has to pass, thinking I’m winning I pass as well. He says he’s winning 10-9. I tell him I thought Bataar was at the other battlefield. He’s as sure as I thought I was, that he was there. I ask of I can take an action since I thought Bataar was at the other battle. He allows me to. I move in Chiwa and He combines an Unholy Strike with his Legion. I then simply bow Bataar, as the Reprisal I had in hand was no longer with to take the province. He offers his hand. 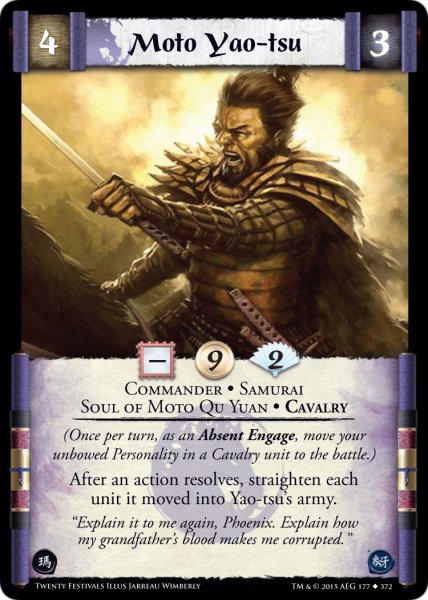 Game 1 – First attack. He was am Isawa Tenkawa so I don’t bother to Cav away from The Abbot. He plays Come One At A Time. I have a Dispute. I drop it, and debate my best course of action. I decide to Accessible as I have 2 and he plays a second. He has another the next turn.

Game 2 – 2nd attack I send a 7 Force Sakiko to the left and a 9 Force Yao-Tsu to the right. I have a Sakiko and 2 Outposts up. He defends all three. I do Sakiko First. Come One At a Time. Can’t hit Dispute. I move to the middle battle. I Cav in Chiwa. He smirks and Usurpations her home. I bow her to move back with her ability. He Passes. I Bring in Sakiko with 8 Unit Force. He plays Come One At a Time. Can’t hit Dispute. I play Accessible. He passes. I move in Zhi-Tae. He plays Come One At A Time. I can’t hit dispute. I only needed 2 more cards … I had VTD in hand, Way of The Unicorn, Reprisal and Rewards. (And 2 more weapons.) If I could have gotten to that VTD I could have gotten that province and had time to push for the next 2, it just wasn’t my day. I remember saying if I get my Accessible I have a good shot when talking to Bradley at the 20th Anniversary Party. Shows what I know. 😕

I probably left a lot a details out, but I was pretty beat by Sunday. I kept waking up at 6:30 like I was going to work and it caught up to me. I fell asleep at 11 Sunday and need out on all the party room shenanigans. Luckily there were lots of pictures and a very amusing video.

The deck going forward: Kamoko needs to be legal. I look forward to that. The deck could use a magic button to Come One At A Time, but I have yet to discover it. I may go to 3 Disputes and 3 Naginatas. Yoritomo might be added as well. The deck draws a lot of cards. Usually 12+ extra cards per game. That number increases in drawn out military matches as shown in my matches vs Yau and Campos. Always maintaining 6-8 cards in hand is a very daunting thing to oppose. A few of my opponents were visibly exasperated that i always had a full hand and was pushing force out in droves.