“What?” I thought I was clicking on a statistics post? Well, you are, but since I know that a lot of folks read these weekly updates, I’m taking the opportunity to ask for your support. Of course, if you’re sharp-eyed you can see that “Donate” button off to the right (over, over, up a little, right above the “Recent Comments”). But we’ve also created a Patreon account. You can follow the link to it up there. Or here. Really, there’s no such thing as too many links when it comes to think sort of thing.

If you’ve never heard of Patreon before, it’s something like a Kickstarter for someone who engages in ongoing content creation. Instead of doing a Kickstarter for a single shot of support, Patreon lets our audience sign up for small amounts of support contingent on the production of content. In our case, although this particular request is contained in a blog post, the triggering content is podcast episodes. If you sign up to support Strange Assembly, then when we release a new episode you’ll provide a pre-determined amount of support (and you can place a monthly limit on it, so you don’t have to worry about something like a big post-GenCon episode series messing up your budget).

No one is required to become a patron in order to access our content. The podcast will remain free. Everything on this website will remain free. But we do have to pay for things like web hosting, and money is a factor when I decide whether I can make more trips to Kotei or other gaming events. Plus, to be frank, we put a healthy amount of time into this. We do not have any “creator goals” set up on Patreon now, but if we get a decent number of patrons the we’ll talk with you about what you might want to see (such as more of that aforementioned gaming travel, or more interviews).

So, we would appreciate it if you’d clink on one of these links, and consider becoming a patron of Strange Assembly. 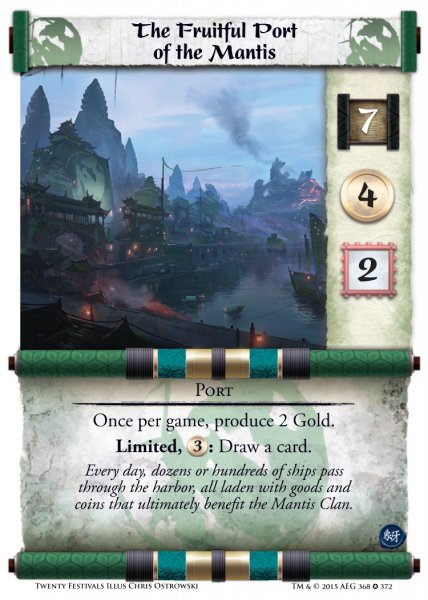 And now, back to your regularly scheduled statistics …

I know what you’re most interested in, so let’s jump right to the Mantis. There were two 20F Arc tournaments last weekend. Mantis won both, which makes 7-for-15. Their relative chance of making the cut has also gone up a bit, from 1.54 to 1.63 (the Phoenix are still ahead, at 1.65).

The biggest change in rate of making the cut was the Scorpion, who dropped from 1.4 to 1.28 (they remain firmly entrenched in third, since the next-highest is Crane at 0.93). Because the Scorpion went down, the overall “imbalance” figure for the environment tweaked down as well.

There’s been a lot of call for some sort of nerf to be made to the Mantis. Last year, the Crane got a bit out of hand and needed a nerf – at the time I commented that this was unfortunate, as Ivory Crane Scouts was basically the most fun/”fair” broken deck that I can recall. This year, I have not advocated for some sort of nerf, for a couple of reasons. One, because the Mantis just haven’t gotten as dominant as the Crane. Two, because the Crane were not only dominant, they were singularly dominant in a way that Mantis are not, with both Phoenix and Scorpion putting up high rates of making the cut (the Phoenix are still well above where I’d like to see relative rates of making the cut, and the Scorpion only just dipped back down into what I think of as “successful enough” balance levels). And if you whack Mantis, does Phoenix (and/or Scorpion, or something else) just rise up even worse?

But it has been asked where exactly did the Crane sit when they decision was made to nerf them last year? Conveniently enough, I did a stat update on April 7, 2014, the day before the nerf was announced, so I can tell you that they had won 7 out of 15 Kotei (well, isn’t that a familiar figure) and their relative chance of making the cut was 2.03 (way, way higher than Mantis are now). After one more weekend post-announcement, the Crane won 6 of 8 Kotei to bring their total to 13 of 23, with a 1.93 relative chance of making the cut.