Been a while since I did one of these columns, but with the release of The New Order for the Legend of the Five Rings CCG, it seemed like a good idea to resurrect the series. In general, these articles present ten thoughts I’ve had recently on gaming-related subjects – in this case, observations on The New Order. Remember, these are knee-jerk reactions at this point, not, say, well-researched observations based on months of playtesting. 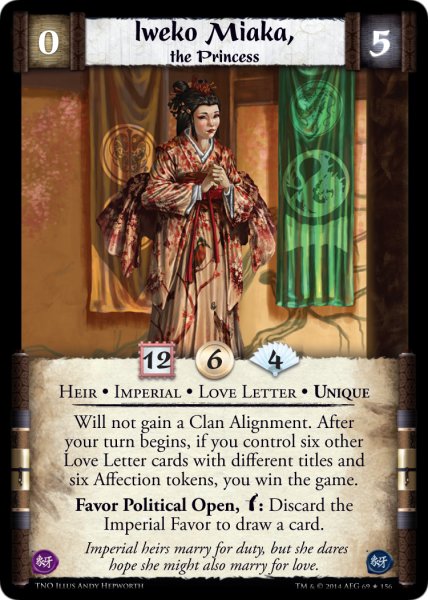 1) L5R Love Letter is here! In what I presume will be an amusing sideline, not a serious deck, all of the personalities from the L5R version of Love Letter appear in The New Order, including your new win condition, Iweko Miaka. Miaka requires you to control six different other love letter cards, which means you’re going to need all six of the other Personalities (Kaiu Akemi, Doji Takato, Togashi Gozato, Matsu Misato, Isawa Tenkawa, and Shosuro Yamazaki – Seppun Tasuke is a Sensei, not a Personality, and does not have the “Love Letter” keyword). Tasuke Sensei hands out the affection tokens (and also makes all of the Love Letter Personalities into members of your Clan), and there’s one non-Personality Love Letter card, the Token of Affection (which then has to have reminder text that it is not an Affection token).

2) Contemplative Shrine: In addition to its obvious synergy with the new Brotherhood Sensei (it of the multiple negative interactions with the 20 Festivals Dragon Stronghold), Contemplative Shrine could be pretty aggressive, effectively letting you buy attachments for an early attack, then discarding a Spell or Kiho to generate 3 Gold.

3) House of No Tomorrow/Jade Bazaar: Good to see the A Line in the Sand Holding keywords not just disappear completely off the map. 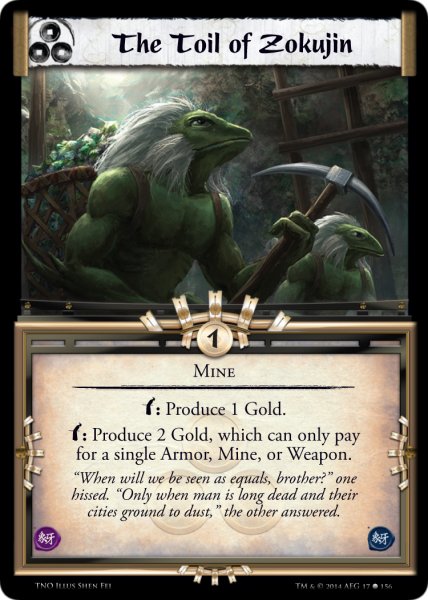 4)  The Toil of the Zokujin: Rise up, my reptilian brethren! Show those Lion that there can be some sort of consequence for the mass enslavement of an entire sentient species!

5) Courtesy: Maybe this is why all of those 20 Festivals Strongholds don’t have improved going second compensation?

6) Unstoppable: Have to admit that seeing literally unstoppable actions makes me a smidge nervous.

7) Traditionalist v. Progressive: Although there are mechanical references to inter-clan conflicts that have some relation to the conflict between the two male heirs, and plenty of flavor discussion of that conflict, I’m not noticing a single mechanical reference to supporting Seiken and/or Shibatsu. It’s the central conflict of your story. It should be blatantly reflected in the mechanics of the cards. Or at least do something like slap “Traditionalist” or “Progressive” flavor keywords on Personalities.

8) Experienced Personalities default to being non-Unique: An entirely understandable move. You really want experienced Personalities for story/marketing/customer enjoyment reasons, but piles of Rare Uniques sometimes rendered a quarter of an L5R expansion’s rares monetarily worthless regardless of power level, which is not a good thing for a CCG. 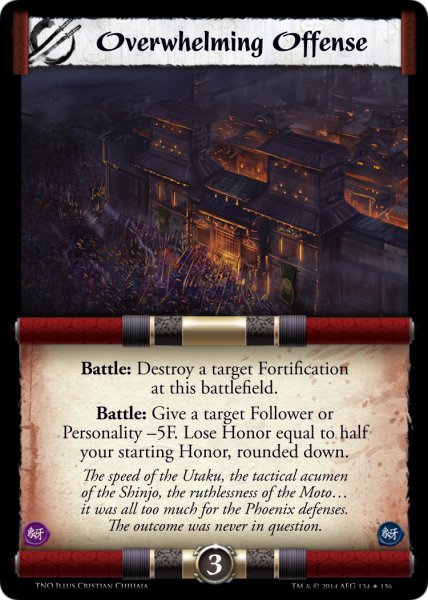 9) Yogo Chijin: I want to complain that the evil-looking Bloodspeaker doesn’t have an honor loss, but I suppose that only about 60% of Bloodspeaker cards over the history of the game have had an honor loss of some sort on them. Still … Bloodspeaker. From the Clan that now has a giant Pit into hell in the middle of its lands. Shouldn’t someone be paying attention to that?

10) Overwhelming Offense: I’ll just pick this one as having flavor text representative of that about the Phoenix/Unicorn conflict. Can the Phoenix catch a break here? There are some factions that don’t feel like they’re ever allowed to lose. Are the Phoenix ever allowed to win? I would normally feel like this is a setup – if it looks so obvious the Phoenix are getting crushed, then there must be some sort of plot twist; they can’t just have the Phoenix lose yet again. But I said the same thing about the Crane in their conflict with the Mantis and, well, the Mantis basically just beat the snot out of the Crane. Still, I feel so bad for the Phoenix getting stomped over and over again that AEG has someone managed to make me kind of want to root for them, even though their position in this particular dispute is a bit of xenophobic stupidity that I’d normally cheer for the Unicorn to crush.