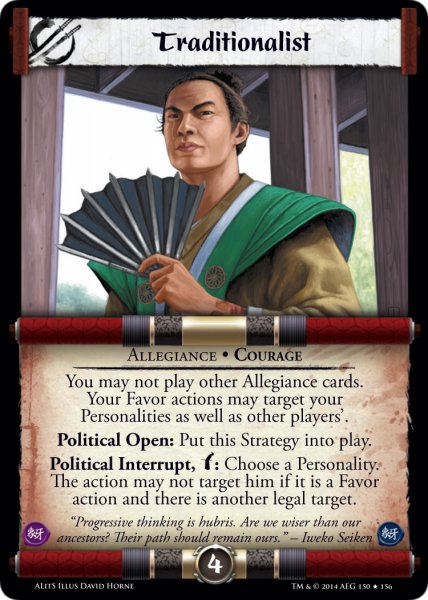 The most recent expansion for the Legend of the Five Rings CCG saw limited release at GenCon, and full release in September … so maybe this isn’t the most timely of set reviews. Regardless, like all of my written set reviews, this is intended as an overview for the casual player, not a detailed card-by-card analysis for tournament play.

ALitS follows the currently standard for L5R expansions. There are boosters, but not starters. Booster “boxes” are metal tins of 36 packs, 15 normal and 1 premium card per pack (premium =! foil, but rather send-in cards like koku and “Glory of” cards; some of the sensei also show up here). I’m sure there’s some sort of MSRP on the packs, but does anyone really pay that for CCGs?

The central story of A Line in the Sand is the escalation of the conflict between the clans over which of the two eldest Imperial children will be identified by the Empress as the official heir to the throne. In one corner, we have Iweko Seikan, the eldest, is a warrior who trained with (almost) all of the Great Clans during his youth. In the other corner we have Iweko Shibatsu, a courtier who was fostered to and raised by the Spider Clan, which is hated by most of the populace of Rokugan, include Seikan. 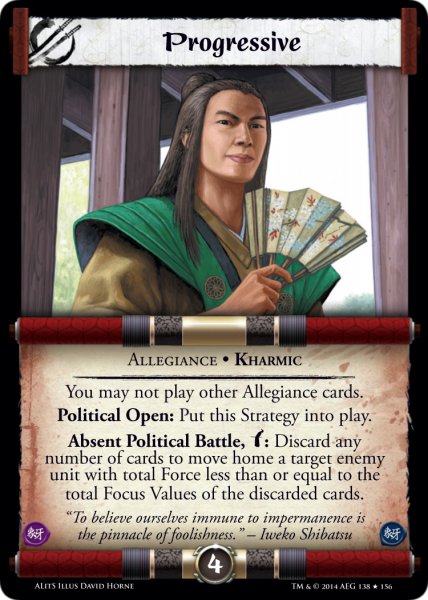 Not only does the story of these two escalate in ALitS, with some actual combat over the matter, but it also starts to more greatly infuse the cards. In particular, there are two Allegiance cards in the set – Traditionalist (Seiken) and Progressive (Shibatsu). These are not a distinct card type, but rather Strategy cards with the Allegiance keyword and an action that puts them into play (they each also have an ability to use once they’re in play). There are then other cards in the set that key of having the Traditionalist or Progressive Allegiance in play, such as Personalities who are cheaper if you are supporting the correct brother or Strategies that have boosted effects.

The plan for the 2014 cycle of L5R is that each clan has one core concept, embodied in its Stronghold, and then two “themes” that are embodied in clan-specific Sensei that allow creation of entirely different deck types. For each clan, at least one of those three supports an honor or dishonor deck, giving every Clan a non-military option. The first set of 9 Sensei was in the Ivory Edition base set, but didn’t really include any honor/dishonor-focused Sensei, leaving only a handful of Clans with options on that front (Crane, Phoenix, Scorpion). A Line in the Sand sees the appearance of the second set of 9 Sensei, which means that they’re almost all for honor or dishonor decks – Ancestor Honor for the Lion, Courtier Honor for the Spider, Shugenja/Spirit Honor for the Mantis, a Courtier-focused sensei for the Scorpion for a different flavor of dishonor deck, Dueling Honor for the Crane (although this one may just end up being better in military dueling), Ide Economic Honor for the Unicorn, Earth Shugenja Honor for Dragon, and Yasuki Economic Dishonor for the Crab. The outlier is Phoenix, who gets a Fire Shugenja Military sensei. 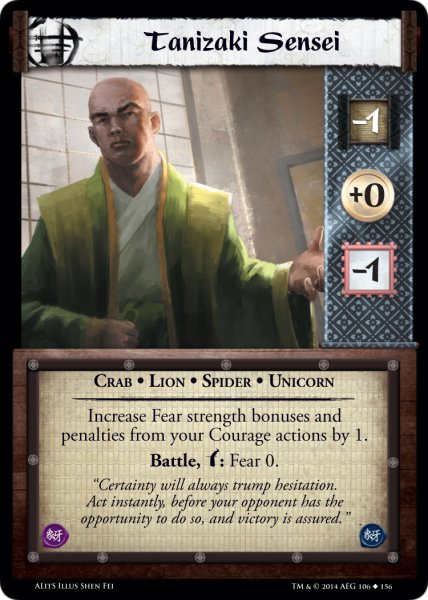 In addition to these clan-specific Sensei, ALitS also includes several multi-clan entires – a Kolat sensei (a control-ish deck that wins by gumming things up and accumulating Conspiracy tokens), a geisha sensei, a sensei based on going wild with the Kharmic keyword (which allows you to cycle cards), and a sensei focused on the new Courage keyword. Yung Sensei (the one focused on the Kharmic keyword) might have a chance of being the first actually good Sensei that penalizes your Stronghold gold production.

Speaking of which, ALitS sees the continued introduction of more mechanical keywords into L5R. Courage is a keyword appearing of Fate cards that lets you discard the card to increase or decrease the strength of a Fear effect. It is expected to be the first entry in a series of keyword version of the seven Bushido virtues (Courage, Sincerity, Honor, etc.).

The second new keyword in A Line in the Sand is Resilient. Once per game, a Resilient Personality will survive destruction due to battle resolution, which can make combat a bit less of a winner-take-all proposition. Resilient seems to cost about 1G (unless you’re a 4G Crane Scout, apparently). 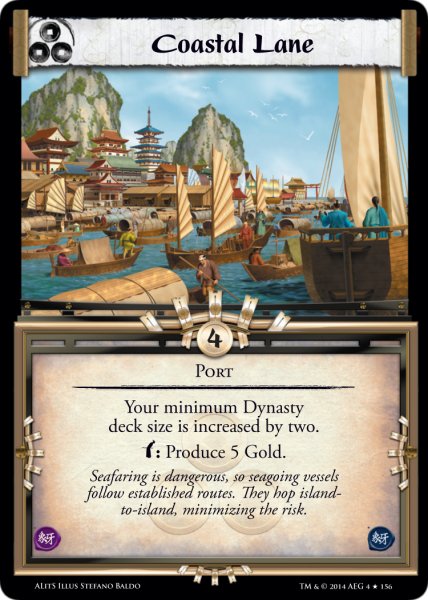 ALitS also sees the rollout of a new way of designing Holdings for a set. Not a mechanical change, but a philosophical one, each set will pick a theme or two for the Holdings, and present what will hopefully be a playable Holding scheme around that theme. The goal, I imagine, is to try to create a broader diversity in Holding schemes, rather than everyone just picking the very best Holdings for pretty much every deck. In ALitS the two choices were a Geisha House theme that tries to mess with your opponent a bit (along with some Geisha Personalities making use of the art from Mai-Star), and a Market/Port scheme that aims for some economic advantage. That the Scorpion, Mantis, and Crane have a Geisha House, Port, and Market as their Clan Holdings might tell you something about who will make the most use of these schemes.

Although the overarching conflict in A Line in the Sand is between the supporters of Seiken and the suppoerters of Shibatsu, that is certainly not the only conflict. Having caught the Scorpion smuggling one too many times (including the loss of some of their patrols), the Lion go to war with the Scorpion, a conflict that sees an opening salvo by the Scorpion in the form of an attack on the sacred Kitsu Tombs. The Scorpion’s goal is to get the Lion fighting with their rage, not their tactical acumen – their plan could prevent the Lion from maximizing their immense strategic advantages, but it could also mean that there are a lot more dead Scorpion by the time the war is over. 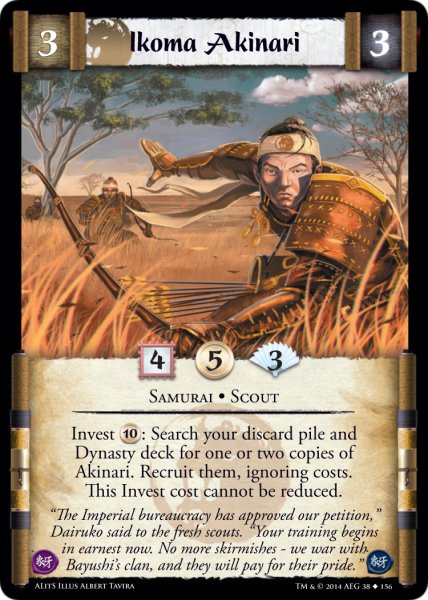 The Phoenix have gotten into a squabble with the Unicorn, seemingly over a concern that the Unicorn have too much gaijin blood to be trusted with newly-discovered magic.

Coastal Lane – This Port has tremendous economic efficiency, generating 5 gold while costing 4 gold. But it imposes a deckbuilding drawback, increasing your minimum deck size by 2 for each Coastal Lane in your deck. So you get to add in three Holdings that are probably better than anything you’ve got, but will also have to add in three new Personalities that are (presumably) a bit worse than anything you’ve got. There’s also a similar deck-size-increasing effect on a Fate card, Strength Remains, which creates a duel that forces the opponent to focus from hand at least once.

Big Invest – Each clan gets a Personality with a unreducible Invest cost of 10 gold, each of whom has a proportionally big effect if you can actually afford the Invest – the Dragon can play multiple Weapons at a discount, the Crane has super-movement abilities, the Spider makes an unstoppable Melee 5 attack when bought, the Lion brings additional copies of himself into play, etc. 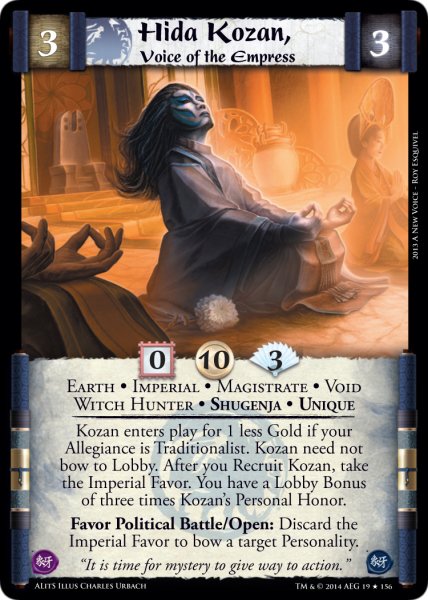 Hida Kozan, Voice of the Empress – The replacement for the elderly and ill (and probably now deceased) Togashi Satsu engages in some pretty serious shenanigans with the Imperial Favor.

Hida Kurima – Not such a big deal by himself, but a noteworthy as an acknowledgement by the L5R design team that the Ivory launch lineup of Crab Personalities did not do a good job of conveying the central Crab notion of giant guys you can’t deal with. Kurima, a 5F Resilient Conqueror, hopes to be more than a handful for his enemies.

Colonial Conscripts – Not the only anti-Farm card in ALitS (Calculated Risk is another), but the one that (to me) is the glaring mistake of the set. Because Colonial Conscripts lets you destroy an enemy Farm for free (and puts the Follower into play as part of that), it can just win games starting on T2 by destroying your opponent’s economy. While meta is necessary, meta that attacks Holdings has to be very carefully calibrated, and this one was not.

Chains – Some sets of card that have been popular in the past out of proportion to their strength have been what are called “chains” (the shout chain, the strike chain, and so forth) – cards that get stronger when “chained” together, targeting your same Personality repeatedly. ALitS introduces two such sets, one for Kensai (A Kensai’s Art/A Kensai’s Will/A Kensai’s Victory) and one for Scouts (Strike First/Press the Advantage/Show No Mercy).

Kolat – The Kolat are not present only in Kobi Sensei, but on Personalities and in a decent amount of flavor text as well. Time will tell how much of a resurgence they will make, or whether their fans will still seek vengeance on the Scorpion.

Breaking Bad – Tamori Wataru is, in fact, a shout out to Breaking Bad, which I hear is a Big Deal to some of you.