Or maybe I should use scare quotes and call it “preview,” since people started getting packs of The Coming Storm at Kotei last weekend. But we shall do this post as scheduled anyway! The past three weeks we’ve had featured the discovery of three of the elemental items that originally appeared in the Hidden City expansion. And today we have the fourth (I think that there isn’t a card for the fifth, the Yumi of Fire, because that story prize is represented by Mirumoto Kalen xp).

The first question one might ask, of course, is “what is a shakuhachi?” 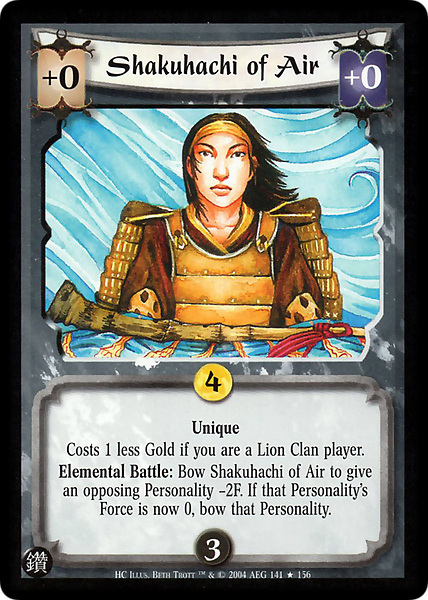 Not sure how well you can tell from that picture, but it’s a wind instrument. It’s technically a kind of flute, but at least when I think about a flute I specifically think about a “western concert flute,” and a shakuhachi is blown from the end, not the side. Anyhow …

The original Shakuhachi of Air had a -2F jab and a possible bow. That seems pretty printable as a Strategy, so let’s see what we’ve got:

Well, that has nothing at all to do with the old Shakuhachi, instead going for a more standard air effect of straightening. Still, straightening two Personalities for one card definitely has potential. Also, it’s easier to see what a shakuhachi is.