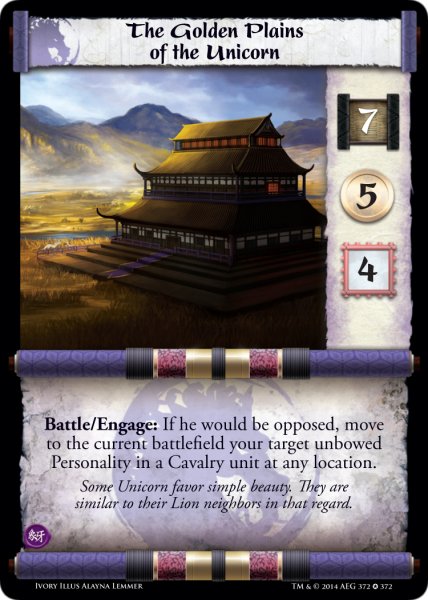 I’m getting a big tired of always running the same Holdings, and I’m not planning on personally writing the Lion article, so now seems like a good time to see what the Ponies can do in Ivory launch bushi league, with their 5G-producing Stronghold enabling us to use 3-4-3 Holdings instead of a Nexus of Lies and a bunch of 2-4-2 Holdings. As always, here are the ground rules.

OK, OK, maybe we don’t still want Nexus of Lies. It’s still not at all shabby, as it’s the only Holding that we’re OK with seeing all by itself on T1 (I note that our rare 4G Holding, House of Prophecy, does not help with this). But it would be nice to pull down more exciting opening flips with a 3G Holding and a 2G Holding. Stables helps with that, since it pulls double duty. Going second helps too, with the double cycle. The other triplet 3G Holding that seems the most possibly attractive is the one that included in the starter deck – Colonial Temple. So let’s see where we end up with the Fate deck and then come back here.

So, what do we have on the other side of the Dynasty deck to go with those Holdings? Let’s start out with Personalities I’m more excited about: 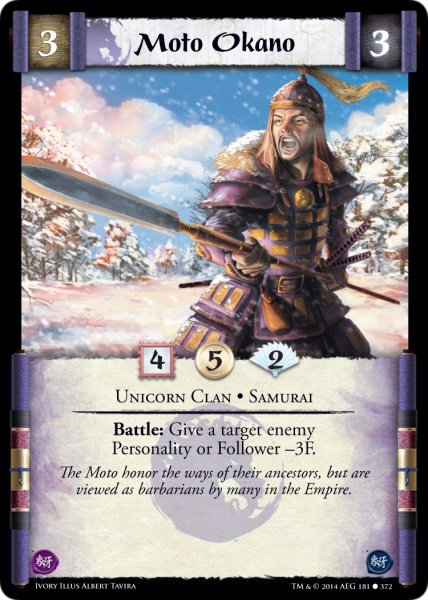 There’s half a Personality base, although a bit heavy on non-Cavalry Personalities for any Unicorn player to be excited.

This is something of a more niche assemblage, which I like for various reasons but don’t want to jump into just yet. Chiwa does nothing on her own, but is sort-of an expensive Conqueror for whoever your best Personality is at the time. If you’ve been reading this, you know I’m not at all excited about 2F Personalities, especially once that cost 5G. Chinua’s ability, however, can be really amazing. Still, I’m concerned that while bushi league’s card pool improves his relative quality in theory, in practice the units you really want to take down in this format will be Uniques (especially from Coils) or bearing attachments. Still, a guy to keep our eyes on. Izimi would be super-attractive if she didn’t have that honor requirement. But coming out so late in the game the low gold cost probably doesn’t matter enough to make up for the early game futility. Miyano is also handy, but his value comes from being able to chump with the created Personality, and our deck may not be set up to take advantage of that. 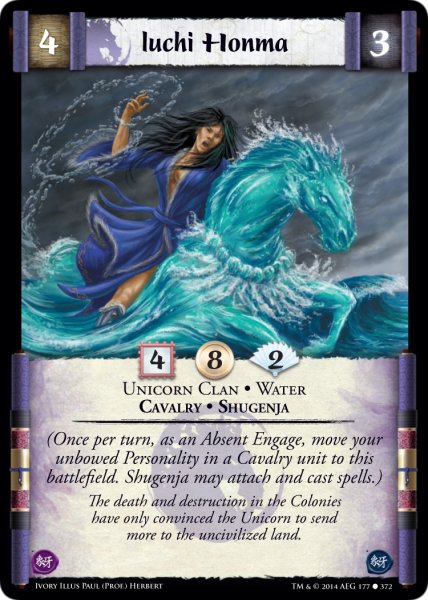 This feels like the second tier of generic Personalities available too us, although none too exciting. Tobita is another Infantry, but at least he has a decent ability. The rest have Cavalry, but are almost all stupendously blank (I can already hear the Unicorn players nodding in agreement), basically just a shifting combination of exactly what gold cost you want to pay for what amount of Force. 4F/Shugenja for 8G (Honma?) 3F (or maybe 4F)/Shugenja for 7G (Daiken)? 4F/Expendable for 7G, but lose 2 honor (Xin)? 3F/Reserve for 6G? 3F/Reserve/Destined for 8G? The only exception to this assortment of empty Cavalry text boxes is Sujikaro. Bowing your 4F Personality for a Melee three isn’t a tremendous addition in full constructed, but there are worse options, and if you don’t care about Shugenja that beats Honma.

Is there room to try for Shugenja here? There was only one in our headliners (Karasu), but there were a couple in or niche assemblage (Chiwa, Miyano) and another couple here (Honma, Daiken), and if we really want we can pull in Moto Ming-Gwok and Moto Ulagan (a rare from the starter deck). That’s nine we could send to battle and another four who like to hang out at home. This is enough to be feasible, so the question becomes what the Spells give us, and whether that’s worth the mostly worse Personalities. Shugenja does cost something in Ivory, but in return you get access to some better actions. Bushi League modifies this a bit against the Spells – you’re paying the same shugenja premium, but you aren’t getting the same bang for your buck. In our case, the shugenja premium seems like less of a burden because our other options aren’t particular efficient anyway. But a couple of our Shugenja options – Daiken and Ming-Gwok – are designed to have dead Personalities in the discard pile, and we don’t have a way to achieve that early except for the otherwise-lousy Ulagan. 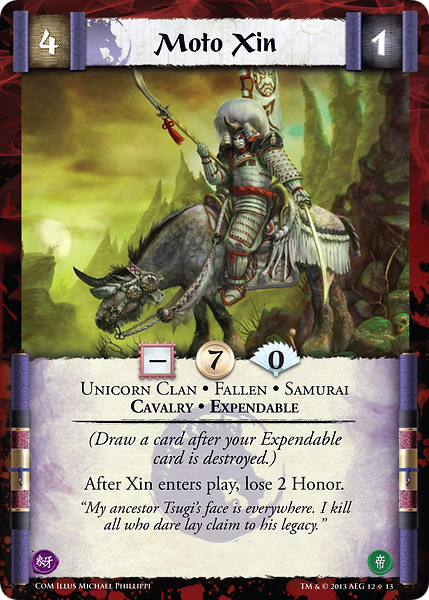 Ultimately, I think that Shugenja are not the way to go (maybe I’d think differently if Jay hadn’t already written about a Phoenix Shugenja deck, but he has, so I don’t feel the need to go there just to have something about Shugenja in here).

Anyhow, as I was saying before I derailed myself:

Xin is fairly efficient Force, as far as these guys go, but he’s a risk. Without Nexus of Lies, I don’t really care about his 2 honor loss – one Proclaim and I make that back, and only Naleesh cares at that point. But Nexus making it 4 is something I’m less excited about, and a T1 or T2 Nexus means that Xin can’t be bought for several turns so Proclaims can keep our honor up. I’m going to live without him, but perhaps a braver soul (or one who doesn’t expect to see Nexus of Lies all over the place) will do better.

Past that, Sang-ju and Sujikaro and Tobita seem like the best bets, although that still leaves us without as much Cavalry as we’d like. Then we add in the Stevenson Special: 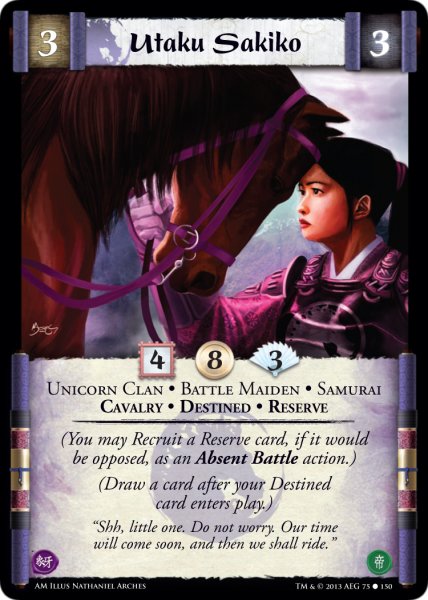 And we’re up to our minimum of 20 Personalities. But I think that the desire for Cavalry here means that we do want to push it up to 22 Personalities, and forego any Events (sorry, Riding to the Rescue) or non-gold-producing Holdings in favor of another two Cavalry Personalities. I’ll go with Moto Ming-Gwok in hopes that we get to turn on his RA3 (and because 4F Cavalry is still nice), and a single copy of Utaku Sakiko (I figure the extra two you pay for the Destined card draw is worth it as compared to Utaku Hyo-Yeon)

I am a bit saddened to again miss out on having enough good Scouts to run Advance Warning (no, adding Hyo-Yeon in would not be enough), especially because that really synergizes with the Stronghold.

Speaking of which, we should note the additional strategic options brought by our Stronghold’s ability. Of course, it can be used to move Personalities back in after they’ve been sent home with the Favor or Incapacitated. But it also opens up some more room for “strategic” plays where we sent our Personality home as a ‘cost’ and then move them back in:

Now, I’ve been putting Fall Back! in all of these military decks anyway, but the others weren’t really options. Storm-Forged Blade, like Fall Back, sends your unit home straightened and ready to return from the Stronghold. Discretionary Valor and Strategic Withdrawal do not send you home straightened, but the added possibility of moving back in all the time gives a little added kicked to the card draw and force stab. 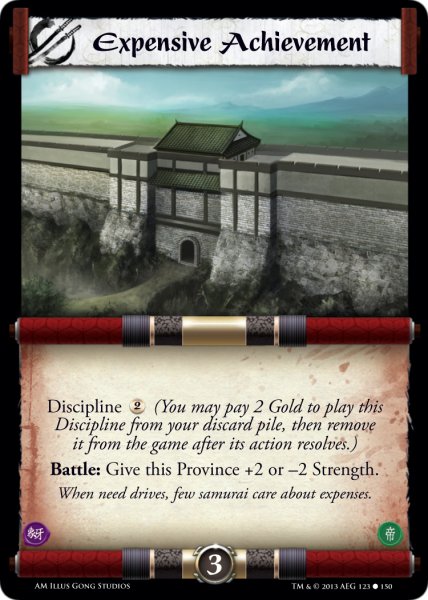 Here’s another Unicorn special. It’s only worth it when you have the strong province sleaze possibility, but it avoids things like Breaking the Rhythm that can nuke unopposed Force pumps.

The other Unicorn-specific thing we can try out is Cavalry Followers (yes, yes, Unicorn players, I know it’s annoying to have to pay for Cavalry on a Follower, but I can only put Justice of the Crane in so many decks).

Light Cavalry just isn’t bringing enough Force to help ensure T4 sleazing, so we can probably forego that. Spitting Llama and Commander’s Steed are probably the best. The Llama’s battle action and the Steed’s Conqueror are both worth the loss of some Force efficiency. However, we’ll stick with that Force efficiency and Medium Cavalry for the next possibility. Heavy Cavalry adds a fourth Force, which would be nice, but that 1 point of Force costs 3G, which is not so nice. Similarly, The White Guard picks up the nice Fear 4 ability, but charges a pricey 3G for it.

I’d like to include the lone copy of Chagatai’s Legion. I don’t think it’s constructed quality, but there should be no shortage of Terrains to nuke. 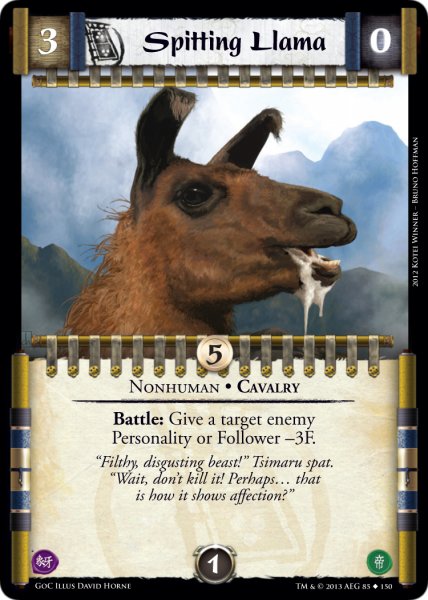 So here’s where we’re at:

The Ancestral Armor should be worth it, so I’ll add that into our tentative list, along with the brutally good for Unicorn Versatile Army, before we start looking for staples to add: 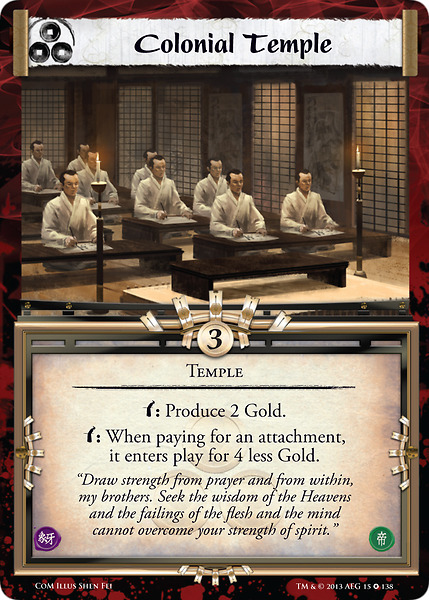 Now with our 40 Fate cards in hand, we turn back to the Dynasty deck and those last few Holdings. We’ll go ahead and include the Colonial Temples, and cut the 4G Holdings. That leaves us needing 2x 2G Holdings, and for some reason our starter deck was gifted with two copies of the promo Family Dojo, so that works out. Then we’ve got one slot left, because there were four 4G Holdings pulled thanks to House of Prophecy. We’re out of 3G options, so this last slot will be that old 2G fallback, Family Library.

The Golden Plains of the Unicorn 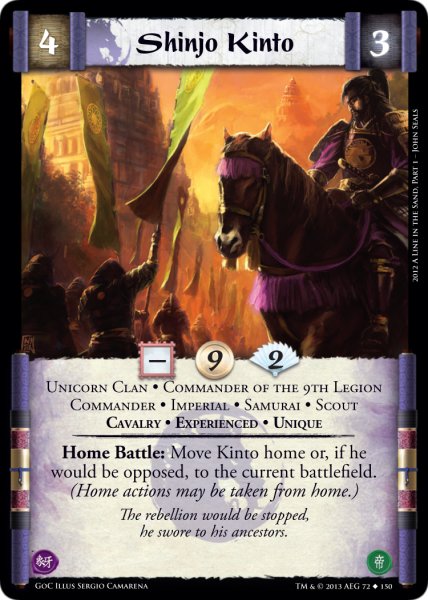 One thought on “On the Cheap – Save a Horse, Ride a Samurai (Ivory Unicorn)”