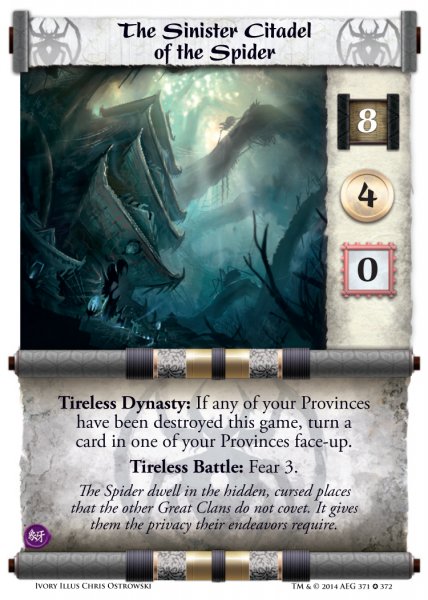 For this fourth installment of the inaugural swathe of Ivory-legal On the Cheap decks, we’ll have none of this “will it be a military deck or not” nonsense. Sorry, Susumu, you are not going to make a functional budget honor deck right now. The only question we have is whether we’re leaning Monksai or we’re leaning scary Daigotsu dudes.

Oh, I say that like I don’t already know the answer. There are real reasons to play Kensai in Ivory Edition. It’s one of the keywords that has the strongest set of actions specifically for it (Grasp the Swords, In Stillness Forge the Soul and Swift Sword Cut are all strong). And in the pre-Ivory sets/promos there are some good Weapons. Unfortunately, we only get access to four of them (the same four that were in the Crab deck and the Scorpion deck – 3x Justice of the Crane and 1x Koan’s Staff), and the quality really goes downhill when we can’t play with Lost Blade of the Maharaja or Khalimpeh-jiak or Family Sword. There’s a second tier of Weapons with decent stats including a Chi boost, plus 4FV, but those qualities are wasted on Spider Monksai, who are not going to duel anytime soon.

But, ultimately, I’m more excited about the Personalities on the other side of the fence, so I’d rather run out the Shadowlands Samurai brigade. Not only is the Samurai route really distinctive for the Spider, but most of their best Personalities in that theme are available to us without dipping into rares. If I can make a deck full of Personalities I like having in my deck while sticking to bushi league rules, I’m happy with that.

Hey, it’s 20 Personalities, and without even grabbing boy Myuken! Arakan, Gyoken and The Shakash give us three 6F/9G Conquerors to help hold down the fort. If you’ve been reading the recent On the Cheap articles, then you know I really like to round out these bushi league military decks with 3F/4G Personalities, and I get two of them in-faction. Most exciting of the two is Daigotsu Konishi – 3F/4G and a decent Battle ability? Sign me up. On the other hand, I’m not enthused about 2F Personalities, but Onosaka’s low gold cost and Interrupt make him appealing anyway. Along with Tairao, he benefits from having a meaningful ability that doesn’t cost Battle tempo to use. And M’Rika is just plain good (just plan on putting her in every Spider deck you make for the rest of 2014).

The next common I’m leaving off – Daigotsu Meguro – is probably one I’d be happy to have in some bushi league decks. The Spider are definitely not lacking for playable bodies.

We are taking some honor loss hits from our Personalities, but I’m not too concerned about dishonor in this format (as discussed in the Scorpion deck writeup), and while Nexus of Lies should be everywhere in bushi league, it has absolutely no effect on us. However, it’s not all that many honor losses, so I’m going to avoid the two “will not your you if your family honor is zero or higher” Personalities from Coils of Madness.

But I suppose that, before we leave the Personality section, we should glance at the rares in our starter deck to see if any of them help:

OK, not a lot to work with here. I don’t like Ryuko. And while I like Yanada, I’m not sure I want to pull anyone out for him – especially since he actually has an honor requirement! Geiko, on the other hand, will be worth it – even if we don’t have any other Fear effects (which we will), the box will trigger to bring him up to 5F any time that we’re opposed.

But for now, let’s count keywords and see if there’s anything in particular other than Fear-related cards for our Fate deck:

We know there’s enough Samurai to play cards for, and there are a variety of keywords that only show up once, so I’ll just leave those off the list. So … Shadowlands it is. I guess this is the part where we hope Purge of Fudoism doesn’t get played by folks wanting to nuke Fudoist Temple. So, what do we get for having Shadowlands?

Well, that’s not exactly a lot, but I’ll take it.

There are our fateside rares from the starter deck. Except for Ascendance we’ll put them all in. Ascendance we’ll wait to see what else we add that has a printed Fear effect – so far we’ve only got the Incendiary Archer and Roboru to copy, and that’s not enough. So, what other Fear effects can we run?

There are a number of cards here we can disregard. Kikage Zumi initiate is just overcosted. We can see that pretty quickly by looking at the handy Reinforced Parangu – if Follower Force is cheaper in Ivory Edition, then why does the 2F Fear 2 Follower cost more than the 2F Fear 2 Weapon? What about the Undead? The Skeletal Troops are a 2F/2G, but I’m pretty sure I can get a better ability at those stats without the honor loss drawback (I’m probably not going to face a dedicated dishonor deck, but I should at least be getting something good out of it). The Plague Zombies are more appealing. Their 4F only costs 5G, which is 2 cheaper than any other Follower is paying for that much Force. That’s the sort of thing I’m willing to soak an honor hit for. And since I’ve got plenty of 3C targets, the -1C tokens often won’t even matter. I’ll play with the clan Armor, but Do-Maru is junk for us. A Fear 2 is not worth a card, so Fearful Volley is out. Ruthless Determination, on the other hand, has some potential – we have a few targets that make it  Fear 5, and a few more that make it a Fear 3. On the other hand, every past that 6 is only making a Fear 2 or can’t play it at all. So that looks like a roleplayer at best.

Okura is Released is also worth getting into the deck here. So our decklist from our specialty cards looks like so:

That leaves 21 left. Another sort-of specialty card for us to look at is Army Like A Tide. Since we’re always going last, we’ll usually be down on Provinces early (that’s why we have that trait on our Stronghold), which maximizes the value of Army Like a Tide. So I’m going to add two of those in, bringing us down to 19 left. There are a few more synergistic things we could do with our fate deck, but first let’s make sure we’ve got room for our “must have” fate cards:

I’m going to forego Breaking the Rhythm for now, but include Suffer the Consequences because we really want to make sure that a simple attachment can’t keep the enemy out of our reach. And, conveniently, that leaves us at exactly 40. Well, maybe not conveniently, since we don’t have any send home, but you can’t have everything.

So now we go back to the Dynasty deck, which we left with 21 Personalities and no Holdings.

This part should be pretty familiar by now. The rare options from our starter deck are:

Can you see that hip-shaking going on over here? That’s my (incredibly lame) happy dance about getting another 4-4-4 Holding for my deck. I’m normally not pumped about Slave Pits, but our Holding options are so limited in this format that I’ll take the extra painful gold production. And, sure, we’ll take the Obsidian Dueling Grounds as well.

That’s 11, so 7 left to go. We’ve got attachments, but the almost all cost 2G, so Exotic Market and Akodo Dojo don’t do much for us. But we do have New Cavalry Tactics and Hidden Storehouses of the Rafiq on top of 3x Deliberations and 3x Suffer the Consequences. And that seems like enough to justify using Kaeru Contractor. We’ll make the remaining four slots 2x Family Library and 2x House of Exotic Goods. That leaves us with one open slot and we’ll shore up our Conqueror mix with that random The Breeding Grounds that I also included in for the Crab deck.

“Fear” Me! (Now With Not As Much Fear As You Think)

The Sinister Citadel of the Spider