I guess it had to happen eventually – we’re now previewing the same card a second time. Yup, Temple to the Elements was one of our Embers of War previews. If you recall, Temple to the Elements mostly served one purpose in Emperor Edition, and that was letting your random monster shugenja make use of the crazy-powerful Skipping the Puddle: 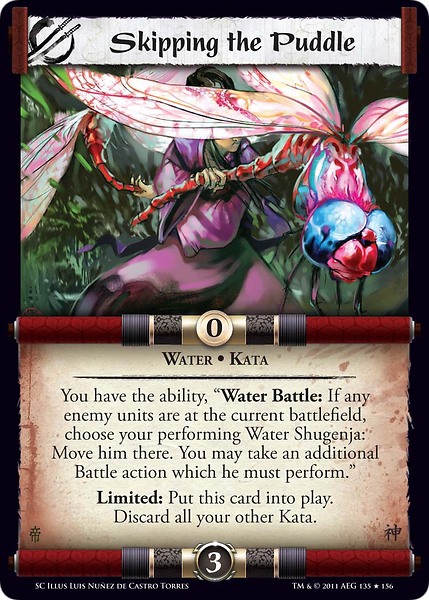 (Has anyone every managed to figure out what’s going on in this picture? Are those dragonfly nunchucks? What does that have to do with anything about the card?)

So, of course, I’m sure that old preview mentioned how that would be a useful combination. Right? Right? Well, maybe not. Strength of the Tsunami, Bo of Water, Erosion, Katana of Fire, Channeling the Fallen, Ember’s Final Fire – all got mentions, but no Skipping the Puddle. That’s the sort of brilliant strategic insight you can expect from your Strange Assembly previews.

So, speaking of brilliant insights, here’s the Ivory Edition version of Temple to the Elements:

No changes except for the flavor text. Except, of course, that you don’t start with six gold anymore (unless you’re Mantis and going second, I suppose). Which makes any 6G Holding seem really bad, at least at this point. So I’ll go ahead and predict that this one will be pretty useless in constructed (remember, you have to draft Holdings now, so Temple to the Elements sitting at common might be something you want to see with on T1 with that 8-10G draft Stronghold).

But, what if you do play it, what can you get out of it? An extra Force for your Wind’s Champion, or from Isawa Norimichi. Extra destruction immunity from Hitomi’s Devotion. The ability to equip Trembling Earth as a Battle action. Duelist from Focus on the Flame. Hitomi’s Devotion seems like the most build-around of the lot, since immunity to destruction during battle resolution seems pretty handy this arc.

One thought on “Preview – Temple to the Elements (Ivory Edition)”