The outlook wasn’t brilliant for the Madville nine that day;
The score stood three to three with but a few more turns to play.
And then when Gkyoken died first, and Kanaye did the same,
A sickly silence fell upon the patrons of the game.

A straggling few got up to go in deep despair. The rest
Clung to that hope with springs eternal in the Dragon breast;
They thought, if only P’an Ku could get but a whack at that –
We’d put up even money, now, if P’an Ku talked some smack.

But Hideo preceded P’an Ku, as did also Tsudoken,
And the former was a lulu and the latter was a hen.
So upon that stricken multitude grim melancholy sat,
For there seemed but little chance of P’an Ku’s getting to talk smack.

But Hideo let fly Eye of the Sword, to the wonderment of all,
And Tsudoken, the much despis-ed, tore the skin off Usohara’s skull.
And when the dust had lifted, and the men saw what had occurred,
There was Hideo taking a second, and Tsudoken snatching a third.

Then from 5,000 throats and more there rose a lusty yell;
It rumbled through the exhibit hall, it rattled the gates of hell;
It knocked upon the Magic players, and recoiled all the way back,
For P’an Ku, mighty P’an Ku, was advancing to talk smack. 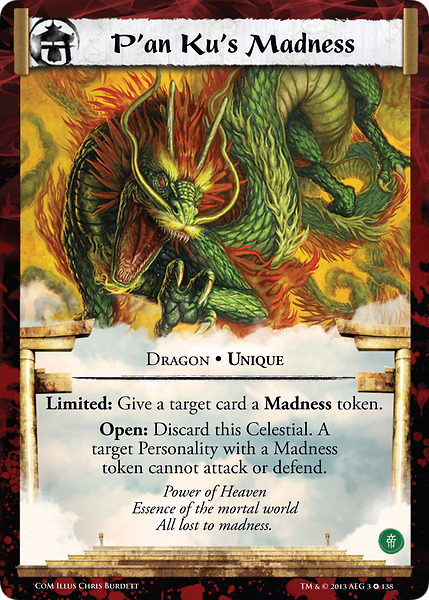 There was ease in P’an Ku’s manner as he stepped into his place;
There was pride in P’an Ku’s bearing and a smile on P’an Ku’s face.
And when, responding to the cheers, he grinned like a cat,
No stranger in the crowd could doubt ’twas P’an Ku talking smack.

Ten thousand eyes were on him as the first word was spoken;
Five thousand tongues applauded when he placed a Madness token.
Then while the whirling Fudoist ground his first into his hip,
Defiance gleamed in P’an Ku’s eye, a sneer curled P’an Ku’s lip.

And now the canon’s shot came hurtling through the air,
And P’an Ku stood a-watching in haughty grandeur there.
Close by the sturdy Dragon the shot unheeded sped-
“That ain’t my style,” said P’an Ku. “two down,” the TO said.

From the foldings chair, black with people, there went up a muffled roar,
Like the beating of the storm waves on a stern and distant shore.
“Kill him! Kill the TO!” shouted someone near the Maw.
And its likely they’d a-killed him had not P’an Ku raised his claw.

With a smile of Celestial charity great P’an Ku’s visage shone;
He stilled the rising tumult; he bade the game go on;
He signaled to the Fudoist, and once more the canon shot.
But P’an Ku still ignored it, and the TO said “remove that third province slot.” 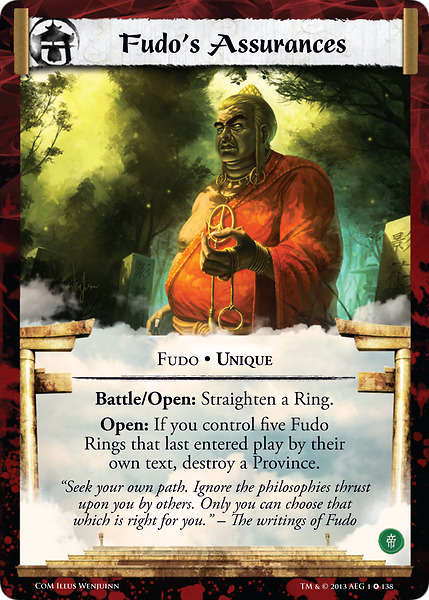 “Fraud!” cried the maddened thousands, and the echo answered fraud;
But one scornful look from P’an Ku and the audience was awed.
They saw his face grow stern and cold, they saw his muscles strain.
And they knew that P’an Ku wouldn’t let the turn be passed again.

The sneer is gone from P’an Ku’s lip, his board position a wreck;
He pounds with cruel violence his fist upon his deck.
And now he attacks with all his might, letting everything go,
And now the air is shattered by the Force of P’an Ku’s blow.

Oh, somewhere in this favored land, the sun is shining bright;
The biwa’s playing somewhere, and somewhere hearts are light,
And somewhere men are laughing, and somewhere children shout;
But there is no joy in Madville – mighty P’an Ku’s been snuffed out.

With apologies to Ernest Lawrence Taylore