Thoughts on L5R from March 31 to April 8, 2012.  Last time my thoughts were seemingly consumed by the Lion.  This time, my mind has apparently been wandering in the direction of the Mantis . . .

1)      Although they have been in the spotlight recently, the Spider are, of course, not the only vast group of individuals to go implausibly undetected in Rokugan, often for far longer than the Spider pulled it off.  Granted, much of this occurred pre-active storyline, and so is entitled to some level of hand-waving – it is probably a rare fantasy epic that doesn’t have some sort of hidden organization that’s been around for ages that only just manages to get discovered by the heroes (in addition to ninja, the Kolat, and the lying darkness, this would also cover the Scorpion Clan Coup, since that was done and gone when the CCG started).  But the oblivious nature of Rokugani is not to be underestimated.

2)      I recently finished reading the Imperial Histories supplement for the L5R RPG, and I have a hard time not rolling my eyes at the repetitiveness of the Mantis involvement in the story.  Apparently, no matter what happens in the rest of Rokugan, the Mantis will not be harmed, and will indeed flourish due to their geography, navy, mercantile attitude, and the hidebound nature and general obliviousness of every single other organization in Rokugan (the only significant blow comes in KYD, when Fu Leng manages to finally get to the Islands of Silk and Spice, but even then the Mantis just pick up stakes and move to the Ivory Kingdoms).  Even when the Mantis are caught trying to overthrow the Emperor, often by working together with foreign agents, no particularly severe consequence (if any) seems to result.  This thread runs through old material, new material, and alternate history material that wasn’t even written by people associated with AEG at the time.  The Mantis are supposed to be the Clan of dynamism, but they still seem to just get the same story over and over.

3)      I’ve long said that the ST needs to get off the whole “Mantis navy is better than everyone else put together.”  And that “the Mantis own the sea,” if it’s actually still around.  That still needs to happen.  But maybe they just need to sink the Islands of Silk and Spice into the sea, if only to force the Clan’s history out of its storytelling rut.

4)      Back on The Great Clans now (I switched over to Imperial Histories after it showed up, and I happened to be in the middle of the Lion section of Great Clans, so then . . . more Mantis), and I find amusing that the Mantis are portrayed as willing to pick a fight over anyone badmouthing Gusai.  Setting aside how one can function generally insisting that others publicly praise someone who was condemned as a criminal by the Emperor, I can’t imagine how much courtiers with good duelists as yojimbo must love that.  You can actually make a relatively straightforward, completely accurate statement about Gusai, that everyone in the room who isn’t a Mantis will agree with, and then the Mantis present would (as portrayed in Great Clans) proceed to commit suicide by picking a fight with you about it.

5)      How does the new “The Clans” write-up of the Crab get away with saying that “the Crab have only ever truly failed once, during the Destroyer War?”  Didn’t they fail in their duty even more spectacularly during the Clan War? 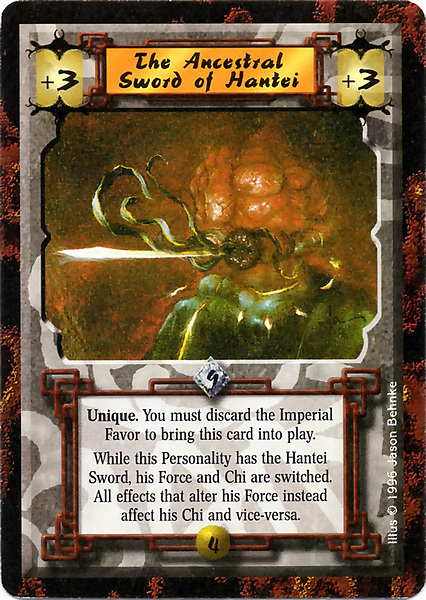 6)      So . . . why exactly do the Spider have the Ancestral Sword of the Hantei?  I have a hard time coming up with a reason why a sitting Empress would give a symbol of a former dynasty to a guy who actually claims to be a scion of that former dynasty, and who wants to overthrow her someday.  I get that Spider player’s are going to be all “that’s cool,” but I have to wonder if there’s going to be a good enough reason in-story.

7)      There should be a floor rule that you have to register your name accurately.

8)      Some of the cast members here think we should do something to commemorate the 50th episode of the Strange Assembly podcast.  I’m not sure.  Is this enough of a milestone to make a deal out of?  If so, does anyone have any ideas how to mark the occasion?

9)      I doubt that many others share my feeling, but I find myself uncomfortable with the increasing role that bounties seem to be playing in the selection of L5R story prizes.  The meaning of naming something in honor of a particular character seems rather lessened when it comes not as the result of working to win a contest of some sort, but rather from being willing to shell out $50.