Emperor Edition has created a lot of buzz at our local card shop.  We have had a lot of new people try the demo decks and others purchase starters.  These people want to play L5R. The problem comes when they try and take the next step.

They go from playing against another demo deck where the game is balanced to games against players that have a large card pool and a stronger knowledge of how to build a deck.  On top of that is the amount of cash you must invest to acquire the powerful cards you need. 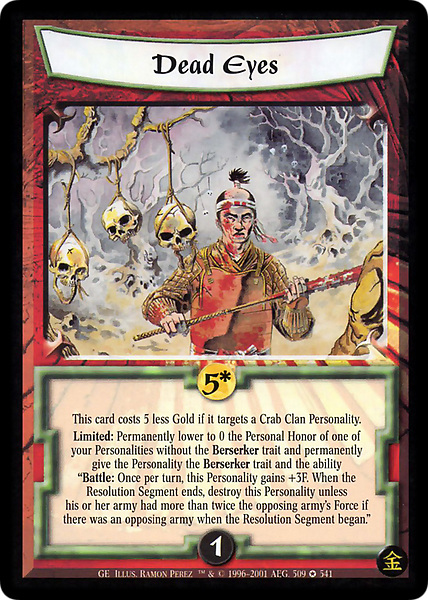 Here is where we lose players.    We always list the great changes Emperor Edition has brought to make the game clearer and easier to play.  However, let’s take a quick look at what a new player has to face when trying to start in L5R  (the black eyes as I like to call them):

A player base that is well educated well versed in strategy

A large card pool to pick from

Due to a lack of a Limited Format, we lose the ability to help new players play competitively without a large investment in certain things like Forgotten Legacy and the latest promos from the Kotei.  This also hurts a new player grow a card pool from sealed/draft events.

So How We Can Help

We can help combat the steep learning curve by helping our new players learn and understand the rules.   We need to carry a deck or two that are in the medium range of skill and abilities.

To help new players, I will choose a clan and build one deck.  The deck list will be posted.  Here is the catch.  I will build this deck for under $80.00 via cards from L5RSearch.com’s pricing.  I will not take into account commons and uncommons into the cost as hopefully, the store and player base will help new players acquire those cards. What they can’t get from the people they can hopefully buy from the store for less than $20.00.  The point is to show that with a small investment, and the starter deck, you can have a competitive l5r deck.

To help the mid-ranged player, I will post alternative cards to consider if you have the money to spend or the card pool to trade for.  This section I hope will generate the most discussion at the bottom of the article.  It’s good for new people to see chatter about why card A is better than card B.  Or why you would consider running three Yasuki Jekku’s in your main berserker deck!

I will play this deck during the week at my local store and give a write up on how each match went.  This will give you an idea of how well the deck works.  I will play it against new players as well as Kotei level decks.  This should provide insight on its flaws and strengths.

Proof in the Pudding

This player was new to the game.  He bought 2 holdings turn 1 and I got 3 (Small Farm), he bought 2 cavalry (Utaku Mai / Shinjo Byung) turn 2.  Turn 3 he doesn’t attack.  (This became a teaching moment)  Turn 3 I attack with Bushotsu and Mimori and he defends (this becomes another teaching moment).  He assigns both Mai and Byung to the battle.   He Mai’s Mimori, I Fortitude Byung, he bows Mimori, I Reckless Rush Byung w/ Bushotsu, he passes, I Tireless Efforts Bushotsu. He has no straighten abilities left in his hand. I crush, he never recovers. 1-0

On turn 1, I play Bushotsu (I have blind Rage and a Spirit in hand) and a Small Farm. He drops Courage of the Mantis and Holdings.  This makes things scary as that is a great static for a Celestial.  I drop Nikaru; he can’t recover from the early province smash. 2-0

I don’t get the blitz draw… it gets scary when he gets out Hiromi on turn 3.  I have to use 3 Rets in hand to kill his in province Sachina because of box and his shugenja sending me home.  The tempo swing is enough to win the game. 3-0

I get 2 Jekku’s but he has 2 of the Kakita Seishi’s on the board to keep the honor train moving.  He had 3 provinces when he crossed…. He had the infamous 1 after my battle phase and won. 3-1 for the night

He got gold screwed, was able to take the last province as he hit 32. He’s a good player; he just had a bad start. 1-0

I hear Retribution is pretty good against military decks…. 2-0.  This player was new and we discussed his deck options and things to look for that will help his deck synergize better.  It was a good learning experience for him. 2-0

Crane Honor Rematch from the night before

He gets 3 Seishi’s on turn one with a Prosperous Village.  But after turn 3 he was at 18 honor and I had cracked a province. He made a play mistake with his defense and it cost him the game when I went for 3 of his one turn… looking back on it, it might have been too risky what I did.  I took 2 of the 3 and left him with 2 provinces.  I cracked the next one, and then the final one when he was at 32 honor.  3-0

I get the gold screw this time but I come back… I do get 2 Jekku’s out that make this a tight match.

Turn 4 I try and swing to take a province, he defends with his champion and a couple others. His 2nd to last card kills my last personality at the battlefield and left him with a bowed champion.  I debate what to do.  I had a Ring of Water in hand.  He had 1 card in hand.  Yasuki Jekku was my only valid target due to actions played on other personalities.  I risked it, and RoW him to the battle field.  He had nothing to stop me.  Jekku straight up murdered Mr. Clean. It was amazing!  He actually says concede at this point but I talk him out of it…. Bad move.

He gets to 36 honor. He has 3 provinces; I send Kisada Mimori and Nikaru to one.  I send Yamadera, Bushotsu and Esumi to another.  We resolve the battle where he has presence first.  After actions that take out peoples, I am left with Bushotsu that will die at the end of battle delayed by Spirit of the Berserker with my box ability still up.  He plays Steel on Steel.  I have Sundering Strike, Immovable Object, Gold and Steel, Ancient Feud and Caught in the Act in Hand.  His force is 11 at the battle field my current force is 9.  His only other 2 personalities on the table are 2 dishonored Tamori Kazushige.  I choose to accept the duel….. I fish for a Duty of the Crab to delay the effects he drops 2 discovering the conspiracy and crosses.

The correct play for that sequence is as follows:

Him: Steel on Steel

Me: giggle and delay and strike

Bow down one of his force guys, win the battle but miss the province.  I then have Kisada, Nikaru, Yamadera and Mimori left plus another Nikaru and Yamadera to purchase to crack 2 provinces before he crosses

There are definitely cards I would take out.  First off, the one Horu out like a fat kid in dodge ball and in goes Daigotsu Hotako.  She is amazing. I also consider other cards like Hida Fubatsu on Dynasty.

From fate side there is a lot of cards to consider: Brawl, another Immovable Object, Your Clan Needs You!, A Brave New World, Broken Alliance.  A Game of Dice and Creating Order are two other cards that belong in this deck.  Here is a shameless plug to all the new players out there for Forgotten Legacy: “Buy it! It’s not just an amazing deck box!”

On that note, I would also go with Bamboo Harvesters XP and Border Keep XP.   Strange Assembly put a gold scheme calculator out a few months ago.  It shows the power of Border Keep XP and more than once I had a hand of 2 Ret’s and a Hidden Defenses against the honor runners.  It would’ve been nice to cycle them.  Also, you wouldn’t normally expect a military deck to truly consider Bamboo Harvesters XP but your Berserkers are expensive so you won’t have a lot of printed battle actions at the fight.  You need cards to play.

For this deck I have 3 resounding MVP’s

I liked this deck.  It’s fun to drop big force guys on the table that just won’t die and it’s fun singing Berzerker from Clerks to put you in the mood.  Also, when one personality is strong enough to take a province by himself and it’s NOT your clan champion? That’s pretty cool too!

10 thoughts on “On the Cheap – Crab Berserkers”